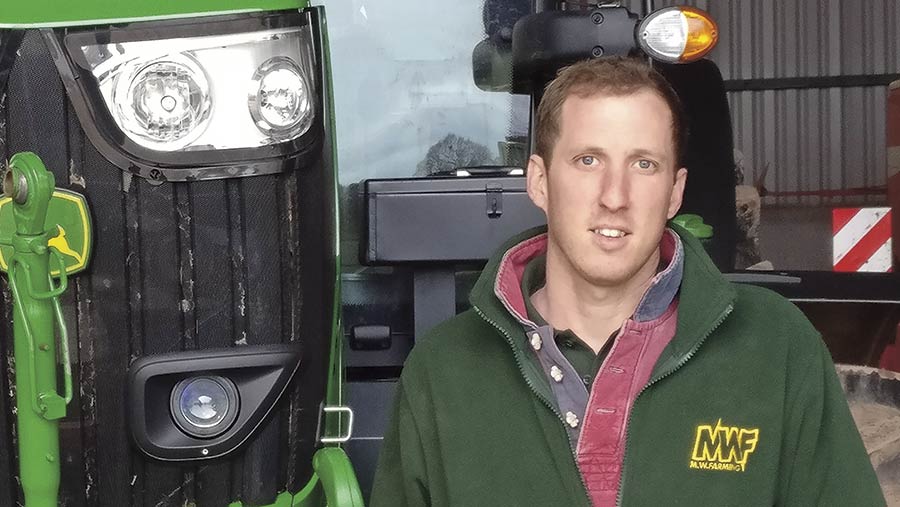 There’s still money to be made in arable farming and there’s plenty of opportunities out there for young farmers who aren’t lucky enough to inherit land.

That’s the message from 29-year-old Matthew Williams, who didn’t grow up on a farm but has just finished his first season managing 485ha of arable land in Shropshire.

The desire to plough their own furrow runs deep within many young entrants, but eye-watering setup capital costs can make it seem like there is no alternative to working for someone else.

But even if running your own arable enterprise is a pipe dream, he says there are steps that you can be taking now to put yourself in a position to take advantage of opportunities that come along.

Despite not growing up on a farm, his countryside childhood saw him taking Easter and summer jobs on the land from the age of 14 and he knew from then that he wanted to run his own farming business.

After finishing school, he went to Harper Adams University to study Agriculture and Farm Business Management.

He then worked full-time as a tractor driver for tenant and contract farmer Clive Millington, before taking up the reins as farm manager on a 400ha arable enterprise in Lincolnshire.

This offered him the chance to add experience of the financial side of running a business and managing staff to his existing practical knowledge of crop growing.

The combined package of all these experiences meant he was able to present himself as a credible candidate to banks, landowners, agents and farm staff when he had the opportunity to return to Shropshire and take on the area Mr Millington was running under his own name of MW Farming.

Putting a plan together

He was given just six weeks to see if he was able to put together a business plan that would enable him to get the finance to acquire the necessary machinery and inputs to get going.

He credits Lloyds Bank with giving him a lot of support to get both a loan and overdraft facility and says banks will still look to support candidates with a strong business plan even without land to act as a security for finance.

He was able to secure his overdraft facility against a house that he owned and took advantage of the British Business Bank’s Enterprise Finance Guarantee (EFG) to get a loan of £90,000 over five years.

The EFG gives support to businesses without significant assets to acquire a loan.

The downside was it required him to give back Single Farm Payment entitlements to landowners to avoid being classed as “double funded”.

He also carefully studied the various machinery finance agreements to find the most cost-effective way of getting his own kit to avoid relying on contractors.

This enabled him to pick up a selection of cultivation kit from Mr Millington and go to the market for a new John Deere, a second-hand combine and a self-propelled sprayer.

Mr Williams shared what he says he thinks have helped him get established, and what could help other young farmers make progress when launching their own businesses.

It’s never too early to put cash aside for the future and a little money can go a long way.

Mr Williams started putting money aside in his teens and was able to put down a deposit on a house at the age of 24.

This is a good goal for anyone to aim for simply to have a place to live, but a house can also be used as collateral against borrowing money when establishing a business.

This approach is not without its risks, of course, as if things take a turn for the worse then your home could be on the line but for those without other assets, there are few other options for securing finance.

2. Have a reputation for neatness

Making yourself known to local landowners before you are part of the bidding process for a parcel of rented land or a contract farming agreement is a vital part of the process.

Often the winning applicant will not be the one that had the highest bid, but the one that the landowner has the most confidence in to both pay their way and look after the land.

He says he takes great care to not only keep the land looking good but by doing little extras such as making all the tramlines turn the same way, regularly washing kit and giving staff branded clothing to wear.

3. Know your costs and be willing to share them

Everyone will be familiar with the idea that knowing your cost of production is a vital part of understanding your business, but it is particularly crucial for young farmers, says Mr Williams.

“Budgets allow me to sleep at night,” he says, “and knowing your costs will give you an advantage over people who don’t.”

But communicating your costs isn’t just about convincing the bank manager that you’re going to be solvent next month.

Staff will also be more motivated if they understand why a system is being changed rather than just having changes dictated to them.

And he isn’t just changing things without consultation either, and made very clear that taking on board the advice of people, particularly who have more experience, is vital.

4. Be excited by business

“I want to be too busy to be sat on a tractor seat,” says Mr Williams, who says time spent in the office shouldn’t be seen as just the least attractive chore to do at the end of the day.

He says that a successful farm business manager is someone who is as interested in the paperwork and financial planning side as being in a seat.

This means decisions are more likely to be taken based on their effect on the bottom line rather than because it is enjoyable.

Particularly important with regular finance payments going out is keeping an eye on cashflow, as well as taking time to cost out different scenarios to help plan for the future.

He advises setting worst-case scenario crop yields and prices per tonne. Combining this with accurate knowledge of costs means growers should know how much they can afford to offer.

“As long as you know your costs, you can pay your bills,” says Mr Williams.

Having a good business plan and a realistic expectation of the costs involved doesn’t just highlight what you are capable of, it also signals what is beyond the realm of possibility.

“The biggest challenge going forward is the competition for land,” admits Mr Williams, who says an additional 40ha he took on recently dropped overall costs of production by £7.40/ha.

But although he is in the market for more hectares to spread costs further, he isn’t going to expand for the sake of expansion.

By not taking on land that he knows is going to be tough to break even on, he is hoping that he will be safer than some other businesses if there is bumpy times ahead during Brexit.

However, if the sums add up and you can make the case to your bank he also says growers shouldn’t be afraid of borrowing big sums.

“If you have an exit strategy – why wouldn’t you do it?”

6. Surround yourself with the right people

It is very difficult to be successful in farming without help from the agricultural community, and Mr Williams credits the many people who work with and for him, including staff, land agents and contractors as being vital to his business.

He said his independent agronomist, Bryce Rham, is an excellent example of someone who he was able to completely rely on.

“He is very good at a yes or not answer. I’m not an agronomist and I don’t want to be – I can make more with my time doing the business side,” he explains.

Having people around you who are also ambitious also spurs you on to want to better yourself as well, he says, and treating people professionally and politely is another thing young entrants can do to get themselves remembered and respected within the industry.