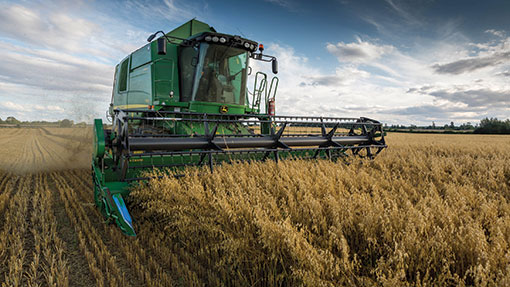 Oats are filling supermarket shelves and could soon be filling UK fields with the strong growth in healthier foods providing a big opportunity for quality growers. Luke Casswell reports

Consumption of oats is growing in the UK according to one expert who says the health benefits have made them increasingly popular in breakfast cereals, cereal bars, and of course, porridge.

Bob Pope, crop development manager at Jordans & Ryvita, says that after years of being the forgotten crop, oats are finally making a comeback, which is driving a resurgence out in the field.

See also: Oats have a bright future despite the glut

Jordans is conducting trials into the crop together with Britain’s largest farming group Velcourt to help maximise yields and quality.

“Our aim is to create the best wildlife biodiversity habitats through the conservation grade farming scheme whilst optimising efficiency and quality in the supply chain,” he adds.

Grower Mike Dewar farms 90ha of winter oats at Stowell Park Estate in Gloucestershire, and is using oats as a break crop to control take all and allow him to focus his attention on first wheats.

“We have worked closely with Jordans to understand what specifications they want and what creates the best end product,” he says.

“We are then able to adapt our systems to satisfy these needs,” Mr Dewar adds.

In 2013, a glut of spring oats flooded the market after a wet autumn led to increased spring plantings, but Mr Pope says there is still an opportunity for good growers to produce quality winter oats.

The work of Jordans & Ryvita with oats and rye will be on show at the Velcourt stands [H-802-8] at the Cereals event.

“There are a limited number of viable winter oat varieties, but there is still so much to be learnt about oats. I think many growers are still using outdated agronomy and are not quite sure what a good oat crop is,” he says.

In a typical year, oats account for just 3% of the UK arable area and are a relatively small part of the European oat market, but could become more important.

“We have seen some dramatic improvements in yields, quality and on-farm profitability, which is set to continue with the partnership approach we have with farmers,” he adds.

Oats need a certain amount of care to make sure they are harvest ted and stored correctly, while the husk around the oat grain allows it to be harvested when other crops such as wheat are likely to be at a higher moisture level.

Grassweeds such as blackgrass, brome and wild oats are big issues for oat growers because there is a lack of chemistry, and Mr Dewar tends to select fields with low grassweed populations, which steers him away from heavier soils.

Jordans teamed up with Velcourt in 2007 and have since set up a number of trials looking to drive forward a crop that had relatively little attention since the 1980s.

“It’s really a two-way relationship and is about educating both sides. Often it is the farmer who comes up with a solution and we can look at that in trial work to verify it or delve deeper into what it means,” Mr Pope says.

A rye choice for a perfect break crop

The rye crop has also benefited from the relationship between Jordans & Ryvita and Velcourt as yields have improved significantly since their relationship started in 2007.

Some 15 Velcourt farms now provide about half the rye used to make Ryvita crispbread at its plant in Poole, Dorset.

Velcourt farm manager Richard Fanshawe grows 100ha of rye in the Cotswolds, and he says the crop has an advantage over barley as there are more herbicides to use to control grassweeds.

“It’s not so dissimilar to milling wheat in terms of achieving a good Hagberg and protein. It’s a great crop to grow on your light land and probably one of the most profitable in these areas,” he says.

Sam Maycock is part of the research and development team at Velcourt, and works closely on the oats trials, which cover about 400 plots.

The first oats trials were carried out two years ago looking at seed dressings and plant growth regulator treatments. These have been developed into larger trials as the pool of data grown larger.

“We are now looking at fungicides, different drilling dates and have more focused micro-nutrient trials as we become more advanced,” says Mr Maycock.

Mr Pope say the trials have advanced dramatically in a short space of time and he expects growers to benefit as a result.

Scotland has typically dominated the spring oat market, but now there are successful autumn-sown growers from the Cotswolds to Bedfordshire.

“If you can grow oats, in the right location and are prepared to take guidance there is a market,” says Mr Maycock.