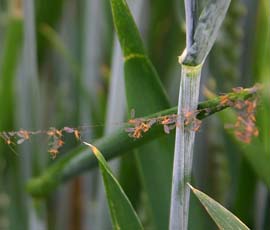 Orange wheat blossom midge sightings have been reported across the country meaning growers should begin monitoring crops for signs of invasion.

In Cambridgeshire, a number of crops have already been subjected to “horrendous” midge swarms, says Mark Hemmant, technical manager for Agrovista.

Some of the affected crops were treated with a pyrethroid during the flag leaf spray, but ears were already beginning to emerge, he says.

“If we get another huge flight, then we will have to use Dursban (chlorpyrifos) as we’ve already used a pyrethroid on the ear.”

Further sightings of OWBM have been reported across the country including Royston, Ely, Newmarket, Essex and Wiltshire, says Sarah Hurry, technical specialist for Dow Agrosciences. “This means growers should begin monitoring crops for signs of the pest.”

Sampling carried out for Dow by ADAS showed there were no signs of pupation during the first week of May, but this was before we had rain, she says. “We are sampling again this week so we’ll get a better picture of what is going on.”

Yellow wheat blossom midge have also been spotted on 61% of the sites sampled by ADAS and they are beginning to pupate, she adds.

But the risk of large-scale OWBM invasion is relatively low due to the small populations over the past two years, says Steve Ellis, an entomologist for ADAS. This means reservoirs of the pest in the soil should be depleted, but there is still a risk. If all the eggs in the soil hatch at the same time and the crop is at the susceptible growth stage, there could still be a problem.”

Predicting true risk will be difficult as crop maturity varies considerably across the country and it is not clear if midge emergence will coincide with crops being at susceptible growth stages 53-59.

“Most years you can usually determine whether soils are sufficiently warm and moist enough to initiate egg hatch,” he notes.

“But this year there are so many confusing factors, such as variable crop development, high numbers of saddle gall midge, which can be mistaken for OWBM and variable rainfall.”

Growers in areas where crops were approaching growth stage 53, should consider putting out pheromone traps to monitor populations, he says. “Because the traps only catch males, it’s important to set them up in an area where you would expect to see high populations – not necessarily in the wheat crop. Once you catch the males in the trap you need to start examining the crops for the females, which will be laying eggs.”