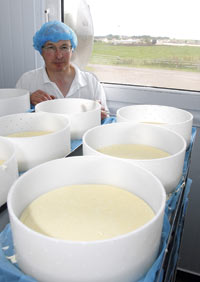 The recession may be biting organic dairy farmers hard, but for an Inverness family, diversifying into organic cheese making has resulted in a booming trade.

Taking on the French when it comes to cheese making may seem risky, considering their fine reputation, but after winning several awards in such a short space of time, its clear Connage Highland Dairy is doing something right.

This organic business, run by brothers Cameron and Callum Clark and their respective wives Eileen and Jill, is proving organics can survive even the toughest times, but admit quality comes first, with organic and vegetarian second.

Quality of the cheese is what Jill Clark believes is helping sustain sales. “Since the recession we haven’t seen any drop in demand for our cheeses, in fact demand is rising,” she says.

But cheese processing wasn’t always on the cards for the Clarks, who decided to convert the farm, Milton of Connage, Ardersier, to organic in 1999.

“We converted to organic for the lifestyle of the cows and also the premium,” says Mrs Clark. “We were already nearly 100% sustainable with the food produced for the cows without use of artificial fertiliser, so it wasn’t much of a change.”

But the problem came when interest from a local creamery to buy the milk and pay a premium after organic conversion in 2003 wasn’t fulfilled. “This forced us to look at other ways to add value,” says Callum Clark.

“We didn’t actually aim to go for cheese production, but after doing a lot of research, we soon realised cheese was going to give the window in terms of lifespan. There were quite a few farmers already diversifying into ice-cream production, but this doesn’t actually use a lot of milk. And when we looked into yogurt production, we found a yogurt factory hadn’t actually made any money for seven years,” he says.

Doing extensive research before setting up the business was key to its success. Accessing money through EU grants and local enterprise grants allowed them to assess all options carefully.

The two brothers spent a lot of time looking at other cheese processors in the UK and soon decided it was the right option for them.

In 2005 they subcontracted the building work, sourcing most the equipment second-hand, travelling as far as Holland for some machinery parts.

By 2006 the Clarks’ were already selling their four different varieties of soft and hard cheese, which were selected predominantly to fit the milk being produced from the 140 mainly black-and-whites with some Jersey and Norwegian Red cows.

But,not only are the cheeses organic they are also vegetarian, says Mrs Clark. “Traditionally, some cheese-makers will add animal rennet to the milk. But because we are organic, we thought we would take the extra step and make them vegetarian.”

The cows’ diet results in seasonal variations in flavour, with a white clover mix at grazing and red clover, peas, oats, barley and wheat mix blended in a mixer wagon for feeding indoors.

The clover diet is not only high in omega 3, but it also influences taste, she says. “Cromal, for example, has a fresh lemony taste in the summer when cows are eating a predominately clover-based diet, but once inside being fed a TMR the taste is different,” she says.

Every cheese we produce requires different techniques, says Mrs Clark. “For example the process of producing brie is not only different, it is also hard. But we all had an interest in brie and so decided to give the French a run for their money.

“When producing brie, you have to be skilled in feeling curds. It has to be produced in a different room, because we are using different starters. The brie, for example, goes into a hot box for seven days so the white bloom can develop and then after a week it is wrapped by hand and stored for three to four weeks.”

Mrs Clark describes the set-up as producing artisan cheese in state-of-the-art surroundings. “Some of our cheeses are from old recipes, but the building is new and modern. The cows are often peering through the window observing what we are doing.”

And it’s the cows that are central to the business, with about 20-25% of the milk going into cheese production, says Mr Clark.

“The cows are yielding about 7000 litres and we have just introduced a few Jerseys and Norwegian Reds. The Jerseys have been introduced for butterfats and Norwegian Reds for longevity, good feet and udders and also because they have good protein and fat ratios. Having a high welfare system is vital for us,” he says.

The cheese is sold through wholesalers, with some going as far as Belgium, Switzerland, Ireland and the USA. All the cheese is fully traceable, since they are nearly 100% sustainable in terms of feed production.

The Connage of Highland Dairy brand has also received national recognition with a cheesecake “highland Crowdie cheesecake” being developed on BBC2’s The Great British Menu programme.

This has helped boost our reputation, says Mrs Clark. “Although our cheese is not in any supermarket, its not saying we haven’t been approached, but we want to walk before we can run,” she says.