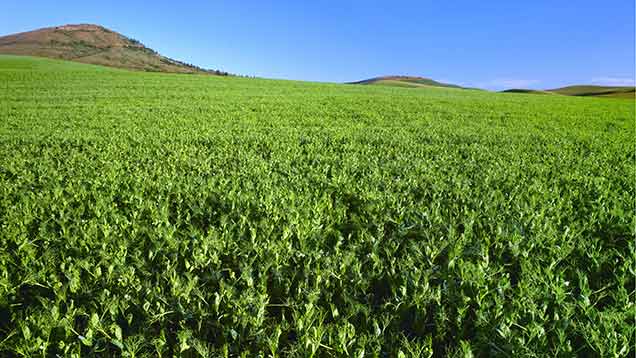 The study found there were no significant differences in organic and conventional yields for leguminous crops such as lentils. (c) Rex

A major review comparing organic and conventional farming has found organic crop yields are much higher than previously thought.

The analysis of 115 studies showed that organic crop yields were only 19.2% lower on average than conventional crops, a smaller difference than previous estimates.

Researchers at the University of California, Berkeley, also found that certain practices could further shrink the productivity gap between organic and conventional farming.

Senior study author Prof Claire Kremen said: “With global food needs predicted to greatly increase in the next 50 years, it’s critical to look more closely at organic farming, because aside from the environmental effects of industrial agriculture, the ability of synthetic fertilisers to increase crop yields has been declining.”

The researchers pointed out that the available studies comparing farming methods were often biased in favour of conventional agriculture, so the estimate of the yield gap is likely overestimated.

“We simply can’t continue to produce food far into the future without taking care of our soils, water and biodiversity.”
Prof Claire Kremen

The study, published in the journal Royal Society B, also found that taking into account methods that optimise the productivity of organic agriculture could minimise the yield gap.

Specifically, they highlighted two agricultural practices, multi-cropping (growing several crops together on the same field) and crop rotation, that would substantially reduce the organic-to-conventional yield gap to 9% and 8%, respectively.

The yields also depended upon the type of crop grown, the researchers found. There were no significant differences in organic and conventional yields for leguminous crops, such as beans, peas and lentils, for instance.

“Our study suggests that through appropriate investment in agro-ecological research to improve organic management and in breeding cultivars for organic farming systems, the yield gap could be reduced or even eliminated for some crops or regions,” said lead author Lauren Ponisio, a graduate student in environmental science, policy and management.

“This is especially true if we mimic nature by creating ecologically diverse farms that harness important ecological interactions such as the nitrogen-fixing benefits of inter-cropping or cover-cropping with legumes.”

The researchers suggested organic farming could be a very competitive alternative to industrial agriculture when it comes to food production.

“It’s important to remember that our current agricultural system produces far more food than is needed to provide for everyone on the planet,” added Prof Kremen.

“Eradicating world hunger requires increasing the access to food, not simply the production. Also, increasing the proportion of agriculture that uses sustainable, organic methods of farming is not a choice, it’s a necessity.

“We simply can’t continue to produce food far into the future without taking care of our soils, water and biodiversity.”

Helen Browning, chief executive of the Soil Association, said organic farming could help meet the challenge of feeding a growing global population more healthily and with a much lower environmental impact.

“We welcome the conclusion from researchers that organic farming is a very competitive alternative to industrial agriculture when it comes to food production,” she added.

“With more research and development, as we are doing through our Duchy Originals Future Farming programme, we can clearly close the gap still further.

“Of course, we still need to reduce waste and encourage moderation in meat consumption, alongside a move to organic farming that will nurture our soils, reduce our dependency on fossil fuels, and protect our wildlife.”