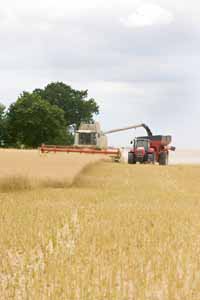 Later maturing varieties, larger acreages and modern agronomy are all adding to the harvesting risk for oilseed rape growers across the country, particularly in wet harvest years.

“All too often, later-than-ideal oilseed rape harvesting has run into the start of wheat combining in recent years. And even where it hasn’t, it has seriously cut into the increasingly limited window for cultivations and weed control ahead of next season’s cropping.

“After all, under good conditions, every 100ha of oilseed rape takes the best part of three days to bring in. With the sort of stop/start combining we’ve become used to lately – not to mention slower working in the greener, thicker-stemmed crops produced by modern agronomy – this can easily be extended to a week or more.

“Add to this the extra delay for many of today’s later maturing varieties to be ready and you’re eating into time you just don’t have to spare with current workloads,” he stresses. 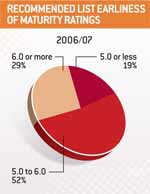 Mr Button’s concerns are heightened by the increasing proportion of later maturing varieties on the Recommended List in recent years.

“It gets worse when you look at the varieties at the top of the list and likely to be grown more widely as a result,” he says. “Of those on the East & West RL with a five-year gross output of more than 100% of controls, 62% are relatively later maturing.

“Nor is it much better on the North List, where early maturity is, arguably, even more important. Here nearly 50% of above average performing varieties are rated 5.0 or less for earliness and less than 10% are 6.0 or more.

“With maturity ratings ranging from 3.7-3.8 for the latest varieties, Sesame and Expert to 6.3 for the earliest, Excalibur and Mendel, we’re talking about a total range of around 2.5 in the main decision-making mix for planting this autumn. The seven to 10-day difference we typically see between the maturity of the earliest and latest varieties at our regional technology centres means each RL rating point represents around three to four days in harvesting practice. Such differences are well worth taking into account in future crop planning.”

To reduce harvest risk, Mr Button advises growers to avoid putting too much of their area into later maturing types. He sees this as particularly important for those with relatively large areas of OSR for their combine capacity, those employing the latest agronomic techniques to optimise plant populations and green area retention, and those who have suffered particular harvesting stresses in recent years.

“The main risk in earlier varieties is really late frosts,” he says. “But given the length of the flowering period, we’ve seen the best modern hybrids, in particular, well able to compensate for early pod loss through later pod set. In contrast, later varieties just run out of time if they have problems. It’s also important to guard against shedding with the early maturers, not least with the greater risk of weather delays we’ve had in recent harvests. Otherwise, you can easily create far bigger volunteer headaches.”