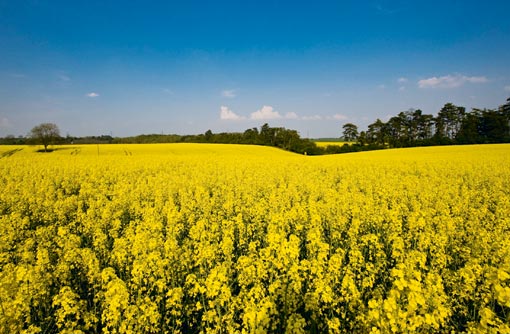 Consistency, ease of management and a high gross output are why one Norfolk grower won’t be changing his flagship oilseed rape variety this year.

Hosting trials for breeder Pioneer, Richard Amis was first introduced to the hybrid variety PR46W21 five years ago and has now been growing it on a commercial scale for four seasons.

“Our four-year average yield has been 4.8t/ha, but it has averaged over 5t/ha in our best season and even hitting 6t/ha in one field,” he explains.

“It has also given us a healthy oil bonus each year, usually providing an extra £25-30/t premium on the base price.”

This year he has around 98ha of oilseed rape in the ground, consisting of 45ha of PR46W21 and the rest made up of trials and the early-maturing hybrid variety Extrovert.

“PR46W21 is in the middle of the road in terms of maturity, so having a variety that finishes earlier helps to spread the workload at harvest,” says Mr Amis.

Agronomy advice comes from independent Prime Agriculture agronomist Peter Riley, who also likes the maturity characteristics of the variety across his area, which features winter barley heavily in the rotation.

“As it tends to be later, the winter barley can be harvested before the PR46W21 and give growers a good, early entry into the following oilseed rape crop,” Mr Riley explains.

Despite the trend towards establishing oilseed rape with cultivator or subsoiler set-ups, Mr Amis uses a conventional plough, press and drill system on his easy-to-work soils.

In a conventionally produced seed-bed there’s risk of establishing a winter proud crop, so the farm tends to drill slightly later than the norm in the last week of August to the first week of September.

Seed-rates are around 40 seed/sq m, but much depends on the day says Mr Riley, with the seed-bed moisture dictating if any adjustment is required.

“If it’s dry we might up the rate, or vice versa, but typically we would be happy with a final plant population of around 25-35 plants/m sq,” he adds.

Sowing low plant populations means a need for a robust pre-emergence herbicide programme, despite the more competitive nature of hybrid oilseed rape varieties such as PR46W21.

A mixture of active ingredients is used to try and tackle weeds early and reduce reliance of the limited post-emergence options later in the season.

“We don’t have a grassweed problem at present, but we are aware that we’re encouraging issues elsewhere in the rotation, so it’s important to keep on top of them in the oilseed rape,” says Mr Riley.

The early management concern when growing PR46W21 stems from its modest phoma and light leaf spot resistance scores of 4 and 5 respectively on the HGCA Recommended List.

However, it is something that doesn’t concern Mr Amis or his agronomist, with the farm using a robust, multi-spray programme based on prothioconazole.

“We are aware of light leaf spot, but the prothioconazole takes care of that, so the main focus should be on managing the variety’s susceptibility to phoma,” Mr Riley explains.

An early application of turkey manure gives the farm’s oilseed rape some early nitrogen, followed by three-applications of a liquid nitrogen/sulphur mix through the spring.

To ensure the nutrients are used for building yield and not an overly tall canopy, plant growth regulation (PGR) is a key consideration for PR46W21 says Mr Riley, despite it’s strong standing ability.

“It is not the shortest variety, so a robust PGR programme based around metconazole is our preference to ensure easier harvesting and reduce the lodging risk, although other products will be available this spring,” he notes.

In what has been a difficult season for oilseed rape, Mr Amis is pleased with the current state of his crops and has seen the benefits of PR46W21’s spring vigour first hand.

After being heavily grazed by pigeons, the crop had been going backwards until April, despite fertliser applications in the early spring.

“The recovery has been remarkable and it looks like its consistency will continue, despite the difficulties.

“Yield is the main driver for change and until we see a clear improvement we’ll stick with it for the foreseeable future,” concludes Mr Amis.