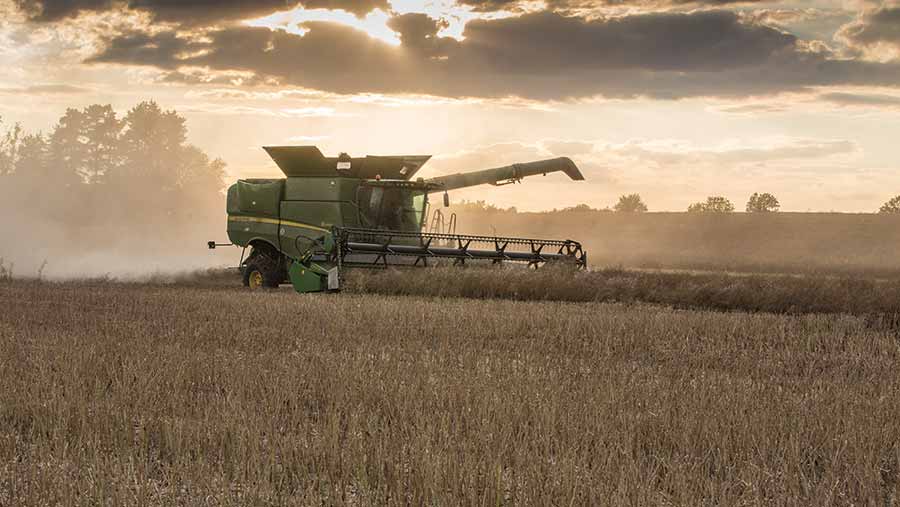 A new type of oilseed rape with the ability to produce a high-value biodegradable oil suitable for the lubricant market could lead to a revival of the crop’s fortunes.

The novel oilseed rape variety, which is known by its project name Biolube and is still to enter National List trials, is one of the features of the Velcourt stand at this year’s Cereals event.

It produces oil with a very high oleic acid content and reduced levels of polyunsaturated fatty acids, offering the potential to open up a new, high-value market.

See also: How to put the profit back into oilseed rape growing

Developed by mutation breeding using a chemical known as EMS, the resulting oilseed rape has an oil profile which makes it suitable to be a renewable alternative to other plant and synthetically derived oil types.

The result of a research project funded by Innovate UK and BBSRC, the project partners have included the University of York, Biorenewables Development Centre and Limagrain UK – all led by Velcourt.

“When they have the right qualities, plant-based lubricants have many advantages over mineral oil-based ones,” explains Velcourt’s technical director Keith Norman.”

These include a reduced carbon footprint and lower toxicity, as well as being biodegradable and offering better lubrication properties.

“In this particular case, the oil is also thermally stable – something which has been elusive in previous biolubricants. That means it can be used for many more hours in industrial processes than the alternative oils, before it starts to degrade.”

Initial tests conducted with the oil from the first test crushes have been very encouraging, he reveals.

“The industry standard is for conventional rapeseed oil to last for 100 hours before it has to be changed. With the Biolube oil, you get more than 500 hours of life in industrial applications, giving the potential to compete with and replace standard synthetic lubricants.”

Samples of the oil have been taken to a range of industries with demand for stable, biodegradable oils, to assess its potential and scope in their operations, he adds.

“Of course, there is also the possibility of adding other things to it, to bring in further properties and benefits. So there are other potential markets to research.”

Although mineral-based oils are currently widespread in the global lubricant market, there are concerns about their continued use, he continues. “They are known pollutants and have a higher eco-toxicity than biolubricants. Around half of all the lubricants sold end up in the environment.”

Planned changes to American legislation are likely to make the use of biodegradable oils in shipping compulsory in the coming months, notes Mr Norman. “So there is an exciting opportunity for biolubricants and this new type of oilseed rape. We need to be ready to take advantage of this new market.”

Elsewhere on the Velcourt stand, visitors will have the chance to compare the best of old farming technologies with some of the latest developments.

A timeline of seven wheat varieties, stretching back over 200 years from the present day to 1832, will show the progress that has been made with plant breeding and provide an opportunity to see how some of the oldest varieties perform in today’s environment.

“Superimposed on the top of these wheats will be the latest fungicide co-formulations, with Bayer’s new fungicide based on two SDHIs being applied at T1 and T2,” says Mr Norman.

However, half of each wheat plot will be left unsprayed, he notes. “That should show up how the different varieties cope with today’s disease pressure, as well as how they respond to fungicides.”

Continuing with the theme of fungicide use, septoria triazole resistance will also be featured by Velcourt, so that growers can get a better understanding of the sensitivity shifts that have taken place to date.

Samples submitted from six Velcourt farms, taken last year before the spraying season began and at the end of the season, will provide the basis of the demonstration and will highlight where the shifts have had the biggest effect.

“The idea behind this is to be able to show what level of performance the triazoles are giving, as well as to tease out any differences between the individual active ingredients,” says Mr Norman.

“We will also be able to extend this monitoring work to the SDHIs, so that we get an early warning of any developments.”

A prototype of a remote soil sensor will also be on display this year, offering farmer live readings of key nutrients.

The sensor, which has been designed to be positioned in the ground, will take live readings of N, P and K, as well as other measures, such as soil pH and moisture, twice a day.

It is being developed to help manage nutrients more effectively and is the result of collaboration between Velcourt, the University of Cambridge and Agrii, with funding from Innovate.

“The readings go back to the central portal, so that growers can see how nutrient levels change as crop uptake takes place,” explains Mr Norman.