Oilseed rape growers are being urged to inspect their crops for phoma as the period of infection nears for a disease which can cut yields by up to 0.5t/ha, costing more than £150.

Although disease levels are currently low, weather conditions are good for the release of disease spores, so symptoms may be more widespread by mid-October. 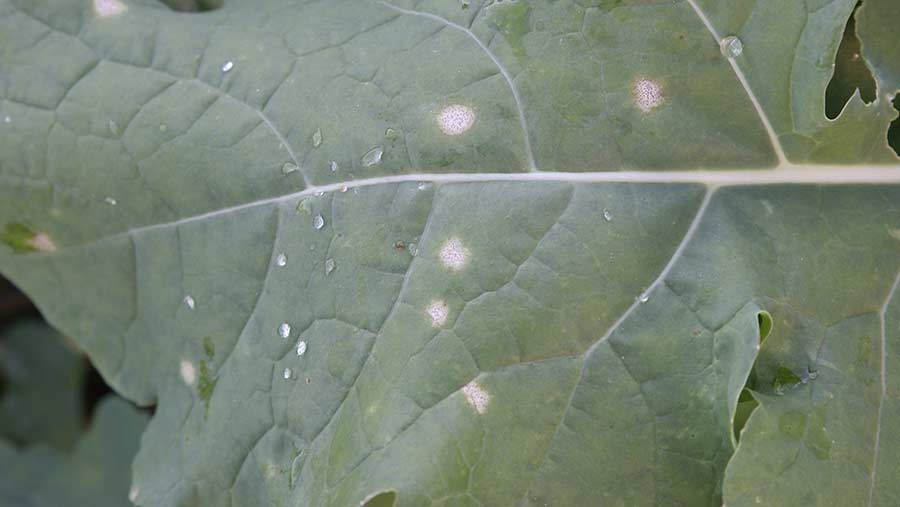 Late-drilled crops and those damaged by cabbage stem flea beetles are likely to be most at risk. Crops with more than 10% of plants showing leaf spotting infection will need a fungicide spray.

Faye Ritchie, plant pathologist with crop consultant Adas, says many areas will have seen 20 days with rain since the start of August, which is a signal that spores are likely to be mature and ready to infect crops.

She had already seen the first phoma leaf spots in the south-west, east and north of the country, but there have been no reports of crops reaching the 10% threshold of plants infected for spraying.

Crops most at risk will have small plants of a susceptible variety, while warm temperatures and repeated rain showers are likely to encourage disease spread.

“If the weather remains favourable for disease development, we’ll probably see the first crops reach threshold in mid-October,” she says.

She warns that backward crops are more susceptible, as infection will move from the leaves to the stem faster on smaller leaves, especially when the weather is mild.

Adas trial sites in Cambridgeshire, Norfolk and Herefordshire are currently seeing less than 1% of plants infected with phoma.

Disease forecaster Weather Innovations, which  works with Rothamsted on forecasts, is showing one hotspot in the Spalding area in Lincolnshire and some areas that may see the threshold reached soon. 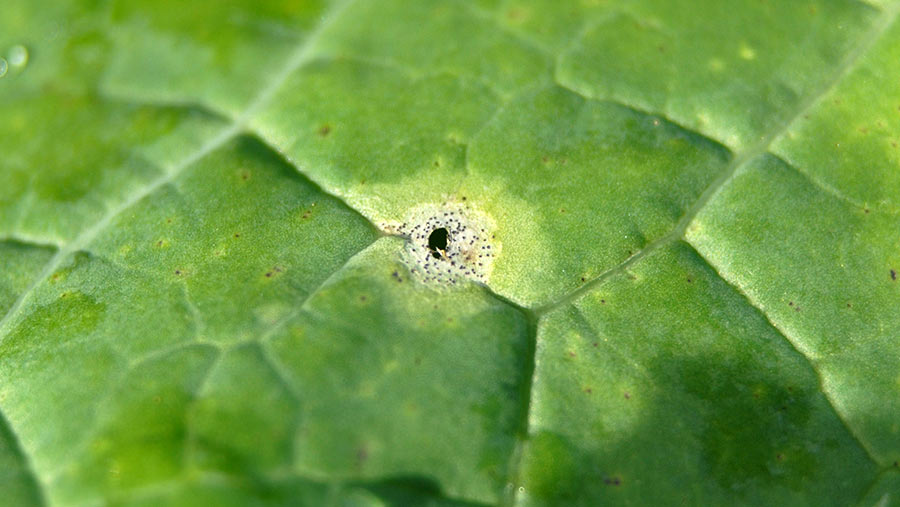 David Leaper, seed technical manager at agronomy group Agrii, agrees small crops will be most at risk, and forward crops are more likely to be able to grow away from the disease.

“Backward crops will need watching, especially those that have been drilled late and have suffered from flea beetle attacks,” he says.

Many newer oilseed rape varieties have improved resistance to phoma, and half of the varieties Agrii is testing have resistance scores of 7 and above.

Fungicide treatments are largely based on azoles and the newer SDHI fungicides with some offering good control of the potentially more serious light leaf spot which tends to develop later in the autumn.

Experts say with growers under pressure from the high costs of producing oilseed rape, they will be eager to use one autumn fungicide rather than two.

“With the levels of phoma not high at the moment, we would recommend a prothioconazole-based spray to control phoma and light leaf spot this autumn,” says Mr Leaper.

James Southgate, technical manager at Syngenta, which markets difenconazole (Plover), says he had seen reports of  phoma from Kent to Yorkshire and from Warwickshire to Norfolk.

He says if phoma is spreading quickly, growers may need two sprays – the first aimed at early phoma infection and the second at light leaf spot.

“Growers should prioritise small crops for treatment as there is less distance for the phoma to travel from the leaves to the stem,” he says.

Growers can use an interactive map on the Rothamsted Research website to help them time a fungicide spray to curb phoma.

The map uses a traffic light colour-coded system to warn growers and agronomists when a 10% phoma infection threshold is likely to be hit in crops in their area.

This threshold is generally regarded as the point at which to consider a fungicide application.

The forecast uses temperature and rainfall data to simulate the development of the phoma fungus on crop debris and subsequent infection of young plants.

Use the map below to find the 10% phoma infection date for oilseed rape in your area.

Find out more about the phoma forecasting work by visiting the Rothamsted Research website.

Out in the field, growers and agronomists are already reporting early cases of the disease.

In Lancashire, ProCam agronomist Tom Smith is starting to see some phoma infection on oilseed rape plants that are further forward.

First bit of Phoma spotted in Lancashire on some advanced OSR. #backbritishfarming pic.twitter.com/9T6VO3qX8k

The disease is also starting to appear in crops in Wiltshire, the Midlands, Norfolk and Ireland, although not yet at levels worth spraying for.

Phoma seen in Wiltshire, once at threshold will treat with 0.25l/ha of Plover pic.twitter.com/2eSXtRnlYl