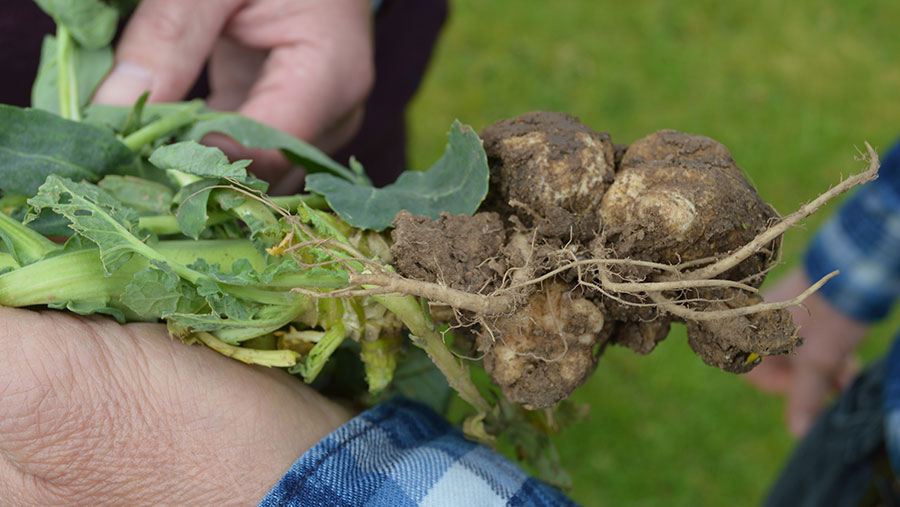 Oilseed rape growers are being urged to focus on good rotations and consider using resistant varieties to counter the increasing threat of clubroot disease, which can cut rapeseed yields by up to 50%.

Tighter rotation of brassica crops, such as oilseed rape, along with warmer and wetter weather have seen an upsurge in the disease across the country, which can remain in the soil for up to 20 years. 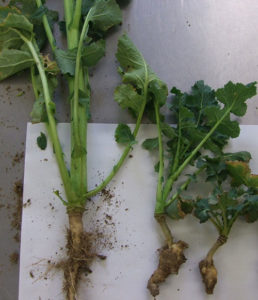 Warning signs of the disease are wilted or stunted plants in hot and dry weather. The large galls on the roots (pictured right) formed by the clubroot pathogen, plasmodiophora brassicae, affect normal root function and so reduces water and nutrient uptake.

“Clubroot can cause yield losses of 50% of potential – or even crop loss with severe infections. And while the problem is perceived to be an issue for Scotland and the Borders, in reality clubroot has now become an issue in the wetter parts of the rest of England as well,” he warns.

Mr Labuda says well-spaced rotations of oilseed rape, cereals and pulses should be standard practice – with oilseed rape grown one year in five or more seen as optimal.

Varietal choice should be a key part of growers’ clubroot armoury, with LSPB’s variety Mentor being the only variety on the AHDB Recommended List with a “specific recommendation” for clubroot resistance.

However, Mentor may be infected by some strains of the disease and infections have been reported in some fields, so over-reliance on the variety in close rotations should be avoided.

LSPB now has a new variety, Crome, which is coming up for AHDB recommendation later this year and will be commercially available for 2019 drilling.

Crome has a higher seed yield than Mentor and with its increased oil content of 46.7%, brings a 3.7% higher gross output based on trials to date, while its resistance rating for light leaf spot is 6.3, says the breeder.