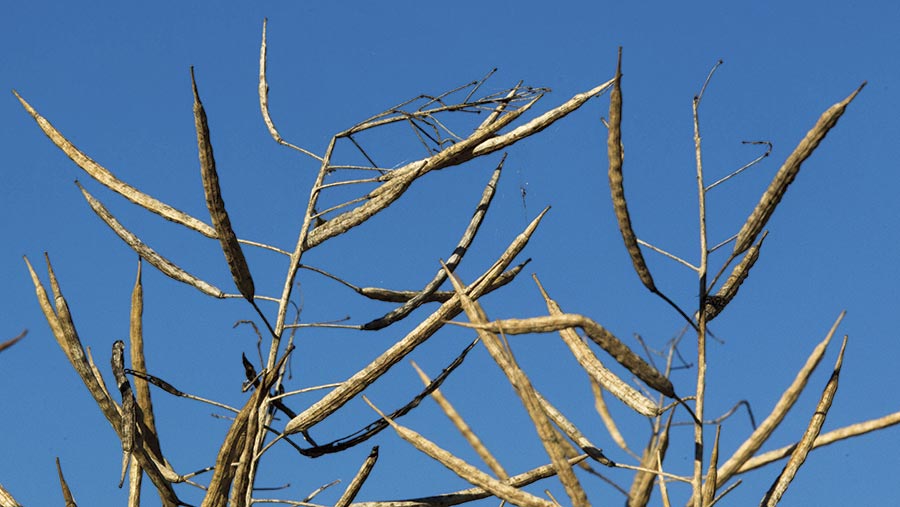 Spring oilseed rape is “cheap as chips” to grow, meaning it can be as profitable as its winter cousin with the right variety and agronomy.

This is the startling message from Nigel and Margaret Lawrence, who have been growing the crop for the past three years.

The reduced yield of spring varieties is more than compensated for by the dramatically reduced costs, with fungicide spend last season coming in at just £22/ha, and insecticides a mere £20/ha, they say.

The husband-and-wife team opted for a spring cropping shake-up three years ago after failing to get good blackgrass control from herbicides alone.They slashed their winter wheat area back to less than half of the 305ha they manage in Oxfordshire.

Winter oilseed rape was ditched in favour of spring varieties to allow more time for stale seed-beds and to also reduce the pigeon threat, with the majority of their chalky loam soils being bordered by woodland.

Getting the crop growing quickly is key to its success, explains Mr Lawrence, and while he applies two applications of metazachlor for blackgrass control to the seed-bed, no broad-leaved weed spray is required after emergence, as the crop’s vigour means is grows away from any potential weed burden.

Growers will see no penalty for holding drilling back later than mid-April if the conditions aren’t right for quick growth, and he warns that a sluggish crop is very vulnerable to beetle damage.

In spite of the drilling date, harvesting on the farm was completed last season by 14 September, allowing plenty of time to establish the following crop. 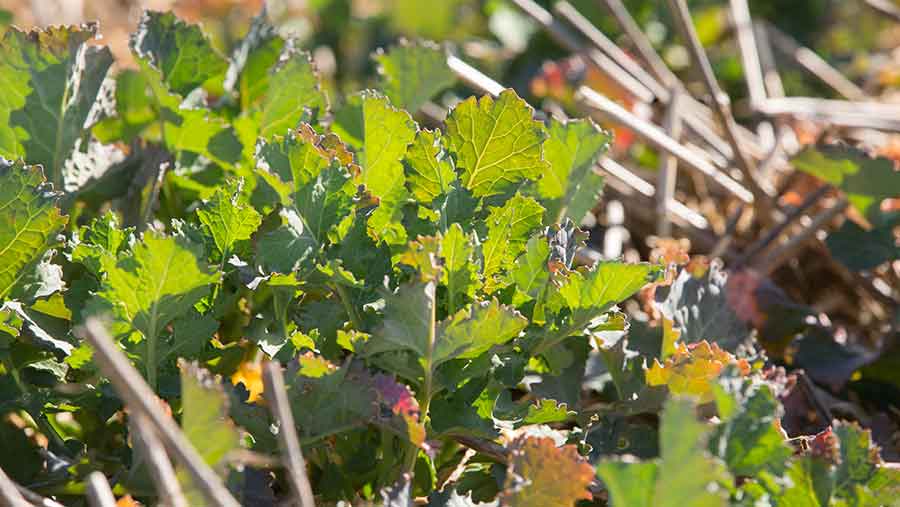 Last season the Lawrences grew the hybrid variety Dodger for the first time on the farm and found there was a “phenomenal” difference compared with their standard conventional variety, Tamarin.

This year will see 50% of the 70ha of spring oilseed rape area at Shirburn Farm, near Wattlington, planted with a hybrid, and Mr and Mrs Lawrence say if these types perform strongly, they will go fully hybrid next season.

Mr Lawrence says the hybrid crop leaps out of the ground and also offers the opportunity to drill relatively late, giving plenty of time for additional stale seed-beds in the spring.

Philip Marr, independent oilseed rape consultant, says avoiding soil compaction can mean an extra 0.25t/ha of yield, as even a small pan will cause the “extremely lazy” root of the rapeseed plant to turn horizontal.

He adds that growers who are concerned about this should consider drilling the centre of their fields before the outside, then doing an extra cultivation around the headlands before drilling.

With the crop taking just 50 days on average from emergence to stem extension, and a further 55 days from stem extension to the green bud stage, good nutrition is essential from day one.

Mr Marr recommends applying 120kg/ha of nitrogen, all in the seed-bed, which is about half that applied to winter rapeseed.

Growing spring oilseed rape – the good and the bad

He advises growers to get soils tested for accessible micronutrients, with deficiencies in magnesium, manganese, boron or molybdenum potentially causing yield penalties of up to 0.4t/ha.

However, Mr Lawrence says chief among the problems facing spring oilseed rape growers is insect damage, with the brassica flea beetle, pollen beetle and the diamondback moth all making an appearance last season.

The brassica flea beetle is the first to feature, and is a threat to plants even before they fully emerge, as the cotyledons can sometimes be eaten before they can be seen above the ground.

There is no better cultivator than the Cambridge roll, as the insect prefers a broken, cloddy surface to a fine, firm seed-bed, he adds. 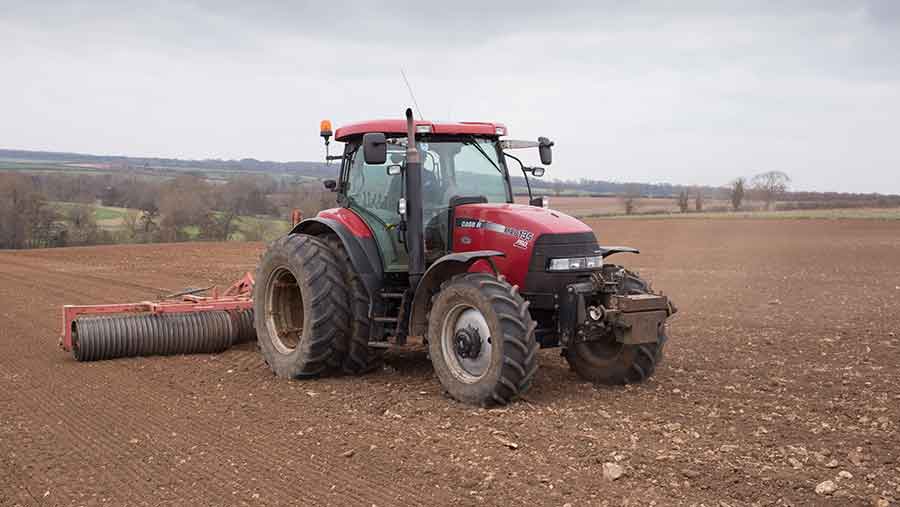 Mr and Mrs Lawrence say they visit the crop each day during the critical post-emergence phase, so insecticides can be applied as soon as damage is seen. Last season they viewed each of their eight spring oilseed rape fields daily for 32 days after drilling.

“Attention to detail and tenacity are required, as 12 hours in the life of a flea beetle is 11 too many,” adds Mr Lawrence.

On the positive side, Mr Marr says pyrethroids give effective control of the brassica flea beetle, as unlike the cabbage stem flea beetle, which targets winter crops, the species has no known chemical resistance.

In contrast, the pollen beetle, which is a threat from the green bud stage starting in June until petal fall, is becoming more difficult to control with available insecticides.

This is a concern for growers, as their effect on yields can potentially be as devastating as the cabbage stem flea beetle, warns Mr Marr. 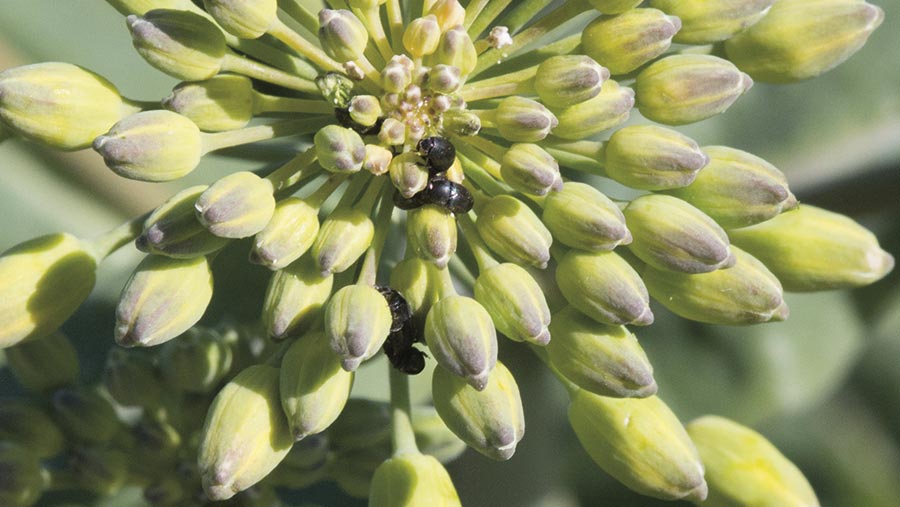 Mr and Mrs Lawrence say constant vigilance is the only solution, with an application of pymetrozine found to be the most effective against the insect pests.

While diamondback moths are unlikely to be seen every year, last season saw the worst-ever infestation experienced, with Mr Lawrence saying he had “never seen so many moths ever…perhaps 50/sq m”.

Mr Marr warns that these pests must be treated before they can lay their eggs in the crop, as although the adults were well controlled by lambda-cyhalothrin, the larvae cannot be sprayed, and a large population can cause significant damage.

There are no major disease issues due to the short growing window, with alternaria a potential threat in a warm and wet season, but Mr Lawrence says if a routine spray is applied early in the season, light leaf spot and phoma won’t be a significant threat.

The Lawrences say hybrid varieties yielded 20% more than the conventional ones, with an average yield of 2.5t/ha in two of the past three seasons, and they are looking to target 3t/ha in 2017.

“The problem with spring oilseed rape is a lot can happen in a week. That’s why farmers are frightened of it, but why have a challenging winter crop when you can have a challenging spring crop that is cheap as chips to grow?” adds Mr Lawrence.

“It is clear winter oilseed rape is becoming very challenging. There is huge potential for spring oilseed rape with the right variety and the right agronomics,” he says.

Mr Helliwell adds that Builder is the latest variety from Bayer and has the highest oil content on the AHDB Descriptive List at 45%, with a gross output of 107%, and could earn growers an oil bonus of £26.50/t over the standard 40% oil content rapeseed.