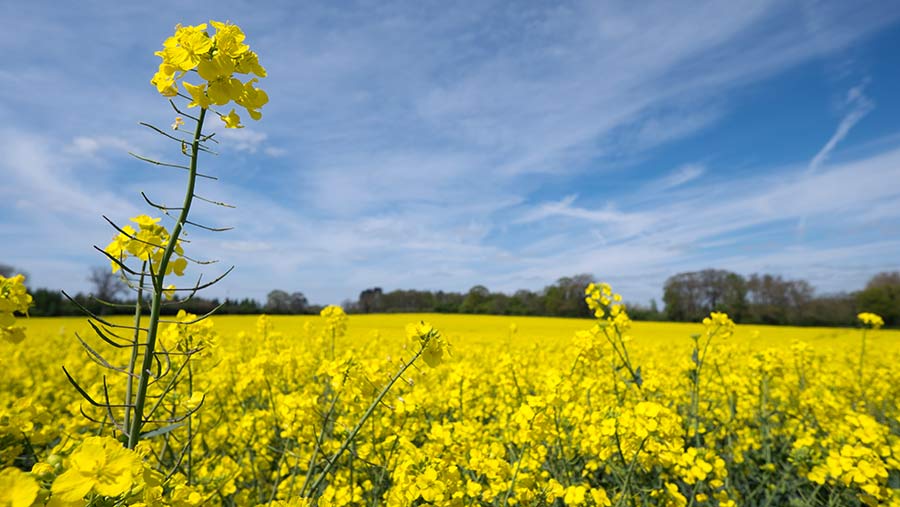 The oilseed rape area may be set for a mini-revival next season after falling to a 13-year low after a fifth consecutive annual fall.

Seed traders report that growers looking at their cropping plans for this autumn are weighing up the pros and cons of oilseed rape, with some deciding in its favour.

However, there are rotational factors coming into play as well, while the crop still can produce decent gross margins.

David Bouch, seed manager with agronomy group Hutchinsons, says if rapeseed prices are close to two-and-a-half times the price of wheat, it will stack up well in most rotations and hold its own against other crop options.

“What we have seen in the past few years is cropping decisions being driven by the agronomic challenges, but helped by low market values,” he says.

“And while that picture hasn’t changed for everyone, there are better economic reasons for having oilseed rape back in an arable rotation,” adds Mr Bouch.

He is confident of oilseed rape’s ability to deliver a robust gross margin, but recognises that difficulties with cabbage stem flea beetle will remain and that growers in areas with high pest numbers might not be prepared to take that risk.

“Without insecticidal seed treatments, there can be establishment problems, especially in pest hotspots. The fact that it was very dry last autumn in these areas just added to this challenge,” he says.

Growers should be looking at varieties that offer rapid establishment and early vigour, and use two or three different choices to give a breadth of genetic material.

“Those with strong early growth and vigorous establishment have the most potential to grow away from pest damage – whether that’s pigeons, slugs or cabbage stem flea beetle,” he says.

Owen Cligg, trading manager at co-operative United Oilseeds, says there are ongoing issues with oilseed rape, including pest pressure and clubroot, and that many growers were disappointed with their final yields last year.

“It’s starting from a low point. There is no doubt it has become more expensive to grow, but we are unlikely to have a repeat of last year’s yields and crops look very promising at this stage,” he says.

The risk/reward balance is changing for the crop and it is likely to show a positive gross margin, unlike many of the alternatives.

“It has an added bonus in that it is harvested early. There is also some exciting varietal technology to help overcome some of the agronomic challenges – such as Clearfield and low-biomass types,” he says.

The UK is likely to have to import rapeseed again this year as it struggles to meet increasing demand, which give an opportunity for growers.

“That is a price driver. Remember that there will be higher domestic demand, as the new rapeseed processing plant in Stratford will be operational from harvest 2017. It will put an extra 100,000t of demand into the system,” he says.

Mr Cligg also highlights that there has been a regional switch with the crop.

“There is less being grown in the east of the country now, but more in the West and North, as well as in Scotland. So the area being grown this year is down, but not by as much as it might have been,” he says.

He believes the current price is proving attractive to many growers.

“For the past few years, it has been below £300/t. You have to go back three to four years to find that value at harvest,” he says.

Even though the global production of oilseeds is at a record high, rapeseed supply is expected to be tight in Europe.

In the UK, uncertainty about the final area planted and the effects of drought and frosts on crop potential are creating plenty of unknowns, with experts forecasting a crop of 1.7-2m tonnes.

Across the European Union, it’s a similar picture, where dry and cool conditions are considered to have compromised yield potential, with the crop size predicted at around 21m tonnes.

However, further afield US plantings of soya beans are expected to exceed previous records, while the Brazilian crop is a massive 110m tonnes.

Soya beans comprise more than 60% of global oilseeds production, so their price and supply exerts a considerable influence over other oilseeds prices, including rapeseed.

As a result, August will be an important month in North America, as dry weather can affect soya bean development and have an adverse effect on yield.

What does all this mean for UK oilseed rape? Only one thing is certain – traders agree that the market will be volatile for a while, until the effect of weather on total global production becomes clearer.

Winter oilseed rape continues to perform well at Saltby Farms, near Melton Mowbray, Leicestershire, helped in part by a five-year contract with ADM, which adds a £15/t premium to those in the Leaf Marque scheme.

This year’s crop of 280ha has proved fairly cheap to grow through the autumn and spring, reports farm manager Frazer Jolly, who points out that both pest and disease pressure has been low.

“There’s been no need to spray for flea beetle or pollen beetle, so insecticide use has been zero. We have also only had to use one sclerotinia spray, thanks to settled conditions throughout flowering,” he says.

Looking ahead, he notes that rapeseed has been increasing in price, giving it an advantage over many of the alternative break crops and providing an opportunity to sell forward.

“Oilseed rape has a good track record here, so there is no reason not to stick with it. However, like many other growers, we are keeping an eye on blackgrass numbers as our weed control costs in the crop could rise if they increase,” he adds.

Mr Jolly grows both hybrid and conventional varieties, with four in the ground this year, to spread the risk and ease pressure at harvest.

One half of the area is conventional Elgar, with the rest split between hybrids Aquila, Alizze and Extrovert.

The hybrids are drilled first, starting in mid- to late August, at a seed rate of 3kg/ha. The conventionals tend to go in later, so that seed rates can be increased in line with seed-bed and weather conditions, as well as any pest threats.

“We do suffer from slugs, which is a legacy from the old wheat/oilseed rape rotation. So we use an extra pass with the cultivator and rolls to reduce slug numbers and destroy eggs, rather than totally relying on slug pellets,” Mr Jolly says.

The varieties grown are selected on their disease resistance ratings, with standing ability and gross output also considered before final decisions are made.

Having a Monsanto trial site on the farm means that Mr Jolly gets an early indication of how newcomers perform and whether they suit his system.

“We don’t want to put all of our eggs in one basket. Having some genetic diversity is important, especially when it comes to harvest,” he says.

The average oilseed rape yield at Saltby Farms is 3.8t/ha, he reports.

“Of course, we would like it to be higher. Hopefully our attention to detail will pay off when it comes to harvest,” he adds.