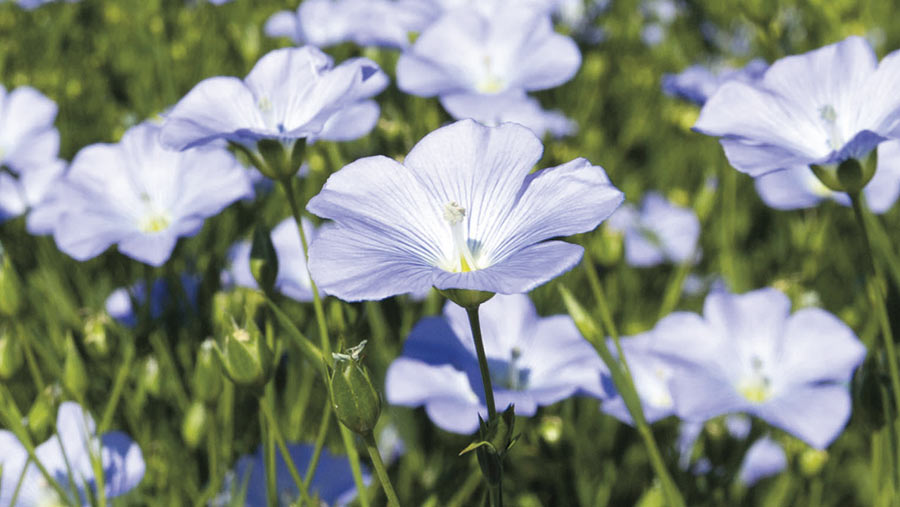 The linseed area is growing in the UK and one Kent grower is adding to this upswing by using it as part of a double spring cropping break in an attempt to control a costly blackgrass infestation.

Linseed costs less to grow than some other spring crops, with total variable costs of £202/ha compared with £322/ha for spring wheat, according to the John Nix Farm Management Pocketbook.

However, Mr Pierce’s overriding aim is to make inroads into the grassweed that is hitting wheat yields. Linseed’s late drilling date, typically in mid-April, enables more stale seed-beds, to kill off successive flushes of the weed. 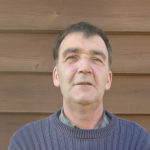 Spring cropping is a key part of Mr Pierce’s blackgrass strategy, with 40% of his 1,000ha of arable land down to spring crops.

To maximise the blackgrass kill, he has gone a step further with a double spring break crop of spring wheat followed by linseed or spring beans. This double break follows winter oilseed rape and then land goes back to winter wheat.

He says he is unable to expand his spring bean cropping, as growing them more frequently than one year in four can lead to poor performance.

This season, an even greater area is being grown after the failure of winter-sown oilseed rape in the bone-dry autumn.

An added bonus to the blackgrass control is that the spring oilseed can be profitable. While Mr Pierce budgets for 2t/ha, he aims to hit a yield of 2.5t/ha.

“There’s a margin to be made once you get to 2t/ha,” he tells Farmers Weekly.

Looking across the UK, linseed is grown on contract over a wide area of England and Scotland (see “Linseed on the rise” below), with half of crops typically traded at a margin over the oilseed rape price, with the remainder at a fixed price. Prices are currently in the region of £350/t.

If yields of 2t/ha are achieved, the crop should offer a margin over most other spring cropping. However, he adds that growing large areas of the crop is a high-risk venture, given that harvesting is only possible in a short window of very fine weather. 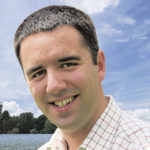 Waiting for soil to warm up in April before drilling is crucial to give the crop every chance to grow away quickly from the twin threats of broad-leaved weeds and the flax beetle, says Sam Deane, a Premium Crops agronomist specialising in linseed.

He advocates 100-120kg nitrogen/ha, with 30% in the seed-bed, or at emergence, and then the remainder at the green bud stage.

Care should be taken to monitor the crop closely for any signs of the flax beetle, as they can target plants at the cotyledon stage before they have fully emerged.

However, unlike the cabbage stem flea beetle, which targets oilseed rape, they are controllable with repeated applications of pyrethroids, says Mr Deane.

Mr Pierce says moving the surface as little as possible prior to drilling is a key part of making conditions unsuitable for the predator, with a single pass with a cultipress often sufficient to freshen the surface prior to the Vaderstad drill.

Pre-emergence chemistry is a key option for broad-leaved weed control, says Mr Deane, with Callisto (mesotrione) used under an extension of authorisation of minor use (EAMU).

Weeds can be a more significant threat to linseed than rival spring crops such as barley, as the crop doesn’t grow as densely, so it’s vital to keep on top of them.

He explains that applying a pre-emergence reduces the need for post-emergence broad-leaved weed control from products such as Eagle (amidosulfuron), giving growers more freedom to apply Centurion Max (clethodim – also applied under an EAMU) at the optimum time for grassweed control.

While diseases are not a threat in the same category as weeds and pests, Mr Deane explains that in warm, wet seasons pasmo, caused by the fungus Septoria linicola, can be a feature.

It is similar to septoria in wheat, and Mr Deane says he would recommend a fungicide such as tebuconazole just before flowering.

A common perception with linseed is that it is a nightmare to harvest, but there are some steps growers can follow to avoid this.

One tip is that good crop desiccation is vital before harvest, says Mr Pierce, who recommends an application of diquat about three weeks before harvest. It’s vital that the “crop is dead to the ground.”

Diquat is preferable to glyphosate as it is taken up more effectively by plants with little green leaf remaining, he explains.

Wait for a hot, sunny day, and don’t attempt to cut the crop before mid-afternoon. Once it starts wrapping around the auger, it’s time to stop, as attempting to force the issue usually results in breakages, he says.

Mr Deane cautions growers that it is also possible to wait too long before cutting as there is a risk of the outer fibre coming away from the stem, a process called “retting”, which causes knife blockage.

“We have more issues with farmers going late rather than early with linseed harvest,” he explains.

Although growers can wait for this stage to pass before cutting again, Mr Deane says it is likely by this time they would be heading into shorter days, when it would be more difficult to get the crop dry enough to cut.

Linseed on the rise?

The planted area of linseed could exceed 30,000ha for the first time in four years after the amount drilled surged to about 27,000ha last season.

Fluctuations in the area grown are normally caused by the rise and fall of rapeseed prices and the availability of land, with the last production peak in 2013 generated by the harsh preceding winter that caused significant areas of autumn cropping to fail.

The late-sown crop offers an opportunity for growers looking to have more time to control blackgrass or find a use for heavier land that need dry out and become workable.

“We have linseed growing everywhere from north of Aberdeenshire to the tip of Cornwall, but it is concentrated where oilseed rape is grown”, says Nigel Padbury, seeds and marketing manager with Premium Crops.

There is plenty of scope for new growers as demand is likely to outstrip supply of the crop until the planted area exceeds “tens of thousands of hectares”, he says.

David Whyte, oilseed trader with United Oilseeds, says it is pure economics whether growers plant the niche crop, explaining that until prices increase to more than £350/t, many farmers in the UK see themselves as better off growing common spring crops such as barley or beans.

The role for UK producers is to supply a product with a high standard of traceability for customers, rather than trying to compete on cost with larger-scale producing countries such as Russia and Kazakhstan, he says.