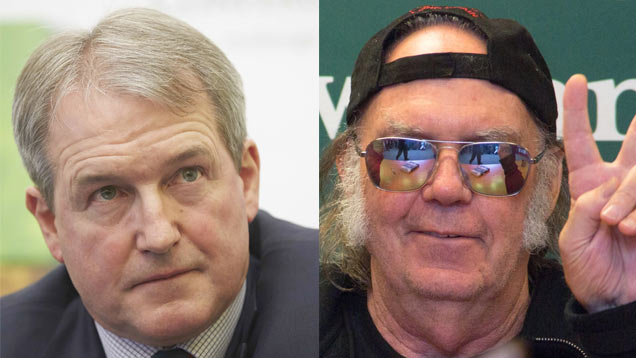 The 69-year-old Canadian folk legend and environmental activist will release The Monsanto Years this month, a new album which casts a critical eye on the US biotech and food industry giant.

According to Rolling Stone magazine, the album targets Monsanto, the world’s largest producer of genetically modified seeds, in a series of anti-GM songs.

However, Mr Paterson attacked into Mr Young in an opinion piece penned for the New York Post, titled “How Neil Young, Greenpeace work to starve the world’s poor”.

He accuses Mr Young of “following the lead of activists” who claim that GMs are “harmful to health, farmers and the environment”.

Mr Paterson said this stance is “tragically wrong” and he makes his point by highlighting the case of so-called “golden rice”, which has been genetically modified with enhanced vitamin A-producing beta-carotene.

The Conservative MP for North Shropshire claims 500,000 people, mostly children, lose their sight each year because of a “lavish scare campaign”, by environmentalist groups including Greenpeace, which has kept golden rice off the market.

Mr Paterson writes: “Instead of bashing companies that are trying to save lives, Young ought to use his star power to convince the NGO community to do the right thing and support giving the developing world the GMO tools it needs to feed its growing, and tragically malnourished, populations.”