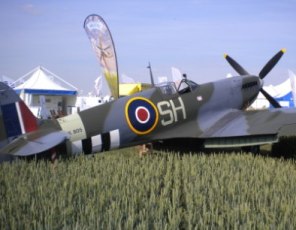 Thousands of farmers are preparing to descend on Boothby Graffoe in Lincolnshire for the opening day of Cereals 2011 (Wednesday, 15 June).

The two-day event, the largest of its kind for the arable sector, has over 450 exhibitors in attendance, spread over a 64ha site which includes working demonstrations.

Hot topics at the show are expected to be the effects of the ongoing drought and the impact of CAP reform and market volatility.

Visitors will also have a chance to explore the crop plots where hundreds of the latest Recommended List and pipeline cereal, oilseed rape and pulse varieties will be on show.

Machinery manufacturers will also be out in force giving growers the opportunity to see their latest developments.

They will have to compete for attention a Spitfire fighter plane being used by Dow Agrosciences to promote its new weedkiller called Spitfire.

The full-size replica, which took 28 years to build, is the focal point of Dow’s stand.

Farmers Weekly will be bringing you all the action from the event as it happens on our dedicated channel.