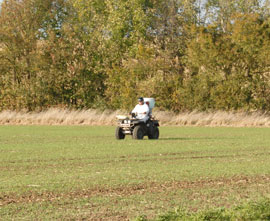 As the cloud over metaldehyde continues to linger, growers and operators attending this year’s Cereals event will have the chance to find out how increasing application accuracy improves slug control and will help maintain metaldehyde use.

According to the Metaldehyde Stewardship Group’s Colin Myram, it’s a chance to reassess bout intervals, understand what the maximum application rates really mean and to take a closer look at calibrating machinery.

“Our research from the ongoing Get Pelletwise campaign clearly shows that total recommended dose rates of metaldehyde set out in the guidelines aren’t well understood,” said Mr Myram. “And it’s understandable given that different slug pellet formulations contain variable percentages of the active ingredient, which translates to different maximum kg/ha rates.

“But it’s crucially important,” he maintained. “Water regulators are closely monitoring the impact of catchment activities designed to reduce the risk of metaldehyde in raw water at the point of abstraction. And given exceedances were still being found in 2010 – a very low usage year for slug pellets – it’s a cause for concern.”

Mr Myram said there is no longer any leeway for wasted pellets. “We will be demonstrating to growers and operators just how inaccurate spreading to a 24-metre interval with a quad bike mounted spinning disc can be and the benefits of reducing the bout width to 12 metres. We are operating in an environment where every slug pellet could count.

Mr Myram added that the total dose rate guidelines are unchanged this autumn. “They set a maximum total application rate of 210g/ha but on the recommendation of a BASIS qualified adviser this can be reduced to 160g/ha or less for metaldehyde based slug pellets applied between 1 August and 31 December. Taking a typical rate of 5kg/ha as an example, that translates to a single application using 75g of metaldehyde with a 1.5% slug pellet; 150g with a 3%; and 200g with a 4% pellet.”

• Cereals 2011 exhibitor information as supplied by the Metaldehyde Stewardship Group.