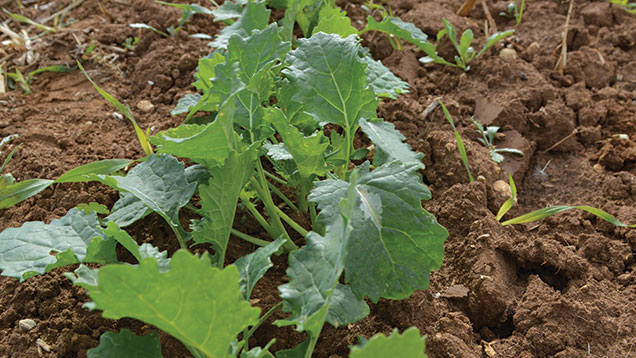 Oilseed rape growers need to be on high alert for phoma disease infecting crops much earlier this season due to wet weather over the past two months.

Recent rain will have prompted fungus on old crop debris to produce air-borne spores which will be looking to infect newly sown rapeseed crops as soon as early October.

The warning comes after 20 days with rain were recorded since the start of August at Adas’s Boxworth site in Cambridgeshire, giving just the right conditions for infection.

“Growers should be monitoring crops as the risk could be high this season since the weather has been favourable for spore release,” Faye Ritchie, plant pathologist at Adas, tells Farmers Weekly.

She adds growers could be seeing the tell-tale signs of the disease – white or fawn-coloured lesions dotted with small black fruiting bodies – in early October, whereas it was late October last season before the disease was seen.

These lesions can occur a week to 10 days after ascospores land on the leaf, and after the pathogen moves down the leaf stalk to the stem it can no longer be controlled by fungicides.

Dr Ritchie suggests growers should use a fungicide when 10-20% of plants are affected, and adds that with smaller plants then it is easier for the disease to spread from leaf to stem.

Many growers, under pressure from low rapeseed prices may look to use just one autumn spray to control phoma and light leaf spot, but Dr Ritchie says they may have to consider a two-spray strategy this autumn for phoma in October and light leaf spot in November.

Disease forecaster Neal Evans, European research lead at Weather Innovations, who works with Rothamsted Research on forecasts, says the risk of phoma is high with conditions being wet and cool.

“The phoma risk is likely to be higher and earlier than in recent years,” he says, adding that the official Rothamsted forecast is due later this week.

“Growers should be looking for very early signs of phoma, especially from slow-growing crops that may have suffered flea beetle and slug damage”
Christine Lilly, Frontier

Crops most at risk are likely to be those that have emerged early and have been slow-growing due to the cool weather, says Christine Lilly, technical support manager at advisory and distributor group Frontier.

“Growers should be looking for very early signs of phoma, especially from slow-growing crops that may have suffered flea beetle and slug damage,” she says.

She cautions against using high rates of tebuconazole for such crops due to the fungicide’s plant growth regulator effect which could prove counter-productive for small crops.

He suggest those varieties with a 4 or 5 score for phoma resistance on the AHDB Recommended List should be the priority for treatment compared with those with resistance of 8 or 9, in a 1-9 scale where 1 is poor resistance and 9 is good resistance.

“The market is moving towards better disease resistance, and good phoma resistance in varieties is now more widely available, he says.