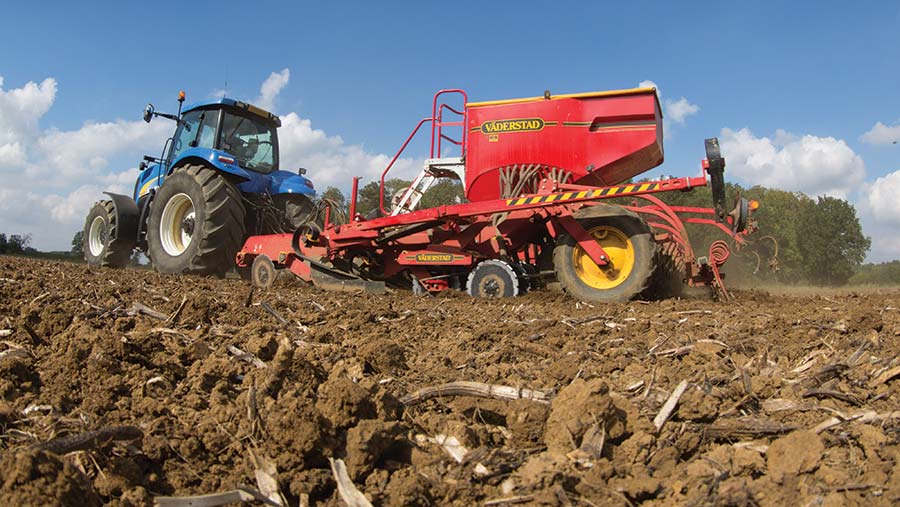 All cultivations, regardless of their depth, damage the soil and can have a detrimental effect on its structure, which is why minimising soil movement is the key to good soil health.

“And to do that you have to follow the principles of conservation agriculture.”

“Used together, with the right agronomy, they can bring blackgrass under control, improve yields and help with soil water management.”

He acknowledges that for many farmers it will take between three and five years to move to a no-till or direct-drilling regime.

“This period is known as the adoption phase. It involves moving from a man-made soil structure to a natural one, so there is a time lag.”

After five years of reduced tillage (less than 10cm deep), growers will see a noticeable difference in soakability and establishment resilience, he adds.

Strip tillage, where strips are created in the autumn or the spring for drilling, is a move in the right direction and should be considered as an interim technique for a year or so, advises Mr Townsend.

“Strip tilling is essentially precision subsoiling. It breaks up the soil where the roots are going to go, so you tend to get better soil drainage.

“You also get mineralisation occurring, so the crop receives a nutrition boost.”

However, it still moves a fair amount of soil and destroys soil structure, despite leaving some of the field undisturbed, he cautions.

“The other big problem with strip tillage is grassweeds. The soil disturbance needed for drilling causes them to germinate.”

With direct drilling, you don’t get the drainage or the nutrient release advantage, he admits.

“That’s why you need to use cover crops and the roots of the previous crop to give you the drainage. It does put you more at the mercy of the weather, but it only works the soil to the depth that the seed is being placed.”

However, a yield dip is not an inevitable consequence of direct drilling, he stresses.

“The correct use of drilling date, seed rate and crop nutrition can overcome this. Then you can drill later in the spring, and earlier in the autumn, without any detriment.”

Both direct drilling and strip tillage will be rolled out by Suffolk grower and AHDB Monitor Farmer Brian Barker this year.

Having looked at the costs and practicalities of getting his 667ha drilled for the last cropping year, Mr Barker calculated that he had moved some 7.2m tonnes of soil ahead of his Vaderstad drill simply to get the seed in the ground.

“That’s not sustainable,” he says. “And as we have a long rotation, there were opportunities to change our whole approach.”

After looking at different drills and techniques, he has opted to use direct drilling for both spring crops and for establishing his planned range of cover crops, but prefers strip tillage for autumn cereal establishment.

“Direct drilling works best in the spring,” he explains. “It helps with moisture retention and blackgrass control, and allows us to drill into a cover crop if necessary. But in most cases the cover crop will have been sprayed off beforehand.”

It is also kinder to the soil, while saving time and keeping costs down, he adds.

In contrast, he plans to use strip tillage in the autumn, where he believes it has advantages over direct drilling and gives more consistent results.

“The research shows that it works best on winter cereals. I still have the option to direct drill if the conditions are right,” he says.

Mr Barker was keen to retain this flexibility, so has purchased two new Sumo drills – a 4m Sumo DD and a 5m Sumo DTS.

He has also kept his plough – describing it as his reset button – so that he can amend his plans according to the weather and ground conditions.

“In order to be progressive, we couldn’t get away from needing two drills,” he says. “It means we will be able to address each field at the time of drilling.”

He has confidence in the new equipment. “The drills have to be able to cope with trash and residues on the soil surface. We’ve done enough playing around with them to know that they work well in these situations.”

Both new drills have a fertiliser placement option, allowing him to use starter fertiliser at drilling, if required.

“Our aim is to get crops away with a good root mass. Putting P, K and S in the seed-bed can really help to achieve this.”

Having two drills may seem extravagant, he acknowledges. “But they came within my budget, give us the flexibility that we need with our range of crops and can be used in different ways, even for undersowing crops.

“The alternative was to keep the ageing Vaderstad and go for a direct drill like a Sumo DD, Cross Slot or John Deere 750a, but I would only be doing half of the new system that I felt I needed.”

Mr Barker says he will have eliminated about 60% of cultivations to take place at Lodge Farm, Westhorpe, near Stowmarket.

“We will still plough around 40ha for blackgrass control,” he reveals. “Having buried the seed by ploughing, we now have the drills that allow it to be left down there.”

There are other advantages of not moving the whole soil profile, he points out.

“The traffic-carrying ability of the soil improves. With decent tyre technology and our new smaller drill system, we will also be able to reduce our horsepower requirement and bring our fixed costs down.”

With this in mind, he plans to replace his highest horsepower Challenger next year, along with another tractor, for a smaller machine which will be used all year round.

The current 530hp model will be replaced by 280hp.

“It has required a different mindset,” he admits. “We will now have to make it work.”

The new drills, which have just been delivered, will be put into service almost immediately, as Mr Barker drills seven to eight different cover crops, all of which have cost below £30/ha.

“On our wet clay soil, which retains moisture, the cover crops are sprayed off in February.

“We then have five weeks for the soil to dry out before drilling. Any smaller-seeded crops can be drilled a bit later, when the soils are warmer.”

There are potential downsides with direct drilling, he notes.

“It is more weather dependent, as it has to be done in good conditions, and there can be more pest damage. Together, that puts the consistency of establishment at risk.”

A move away from direct drilling is just one of the management changes that have contributed to the impressive turnaround seen at Yattendon Estates in Berkshire in recent years.

In the early 2000s, the estate’s feed wheats were struggling to achieve 8t/ha and oilseed rape had been abandoned by farm manager Alastair Jeffrey and his team, as it was not viable on the 2,100ha of Grade 3, very variable land.

Almost 15 years later, after working with Agrii, the picture is completely different.

The milling wheats are averaging just under 10t/ha, oilseed rape yields are up to 5t/ha and winter barley is achieving more than 8.5t/ha.

Direct drilling, which had become the estate’s default position, was replaced in 2003 with shallow cultivations for all cereal crops.

At the same time, the business shifted to tracks for all soil working and adopted a relentless focus on establishment, while also rethinking variety choice and business performance monitoring.

“There’s no doubt that poor establishment was part of the yield problem and direct drilling was doing us no favours whatsoever,” says Mr Jeffrey.

An added factor is that winter crops need to get up and away as rapidly as possible on the yield-limited ground, he adds.

“We now go with a Horsch Pronto drill, following Vaderstad Top Down and/or Carrier cultivations.”

Oilseed rape is established with the help of the plough, he reveals.

“We don’t stint on cultivations with our oilseed rape, as we must have a fine, firm seed-bed to get the crop ahead of the slugs. They are plentiful on our ground, due to its high water table and heavy flint burden.”

As a result, the plough is used across most of the 540ha of oilseed rape land and where it is needed with cereals.

The workrates that are achieved with the 10-furrow reversible plough are the same as those with the Vaderstad Top Down, so there has been no loss of efficiency, says Mr Jeffrey.