It was a dramatic finish to harvest for Peter Lamb from Knighton Manor Farm, Broadchalke near Salisbury who ended up with five combines running through his field at one time 21 September.

But the really remarkable thing about this Wiltshire farmer’s harvest is that he finished without drying a single tonne of his crop. He grew 460 acres of OSR, 521 acres of winter wheat and 250 acres of barley.

Mr Lamb took the decision not to harvest until moisture levels fell to 16% or below. It meant that the combine which he shares with neighbour Michael Roe of Hut and Lodge Farm only cut on his farm on one day between 29 July and 15 September. 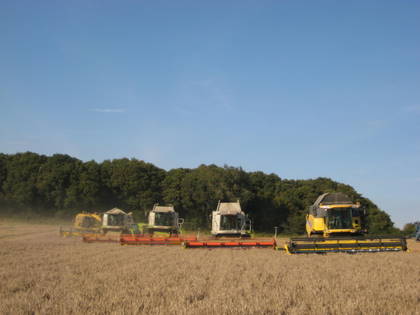 The upside was that his neighbours joined him to finish his 521 acres of Robigus winter wheat in three days.

The grain is being moved by Grainfarmers this week onto a boat at Southampton for export.

Mr Lamb said: “It was a case of holding my nerve and this is a gamble that has only partly paid off because the specific weight dropped from about 75 to 68. But I wasn’t prepared to go out at high moisture. I believe in solar drying.” 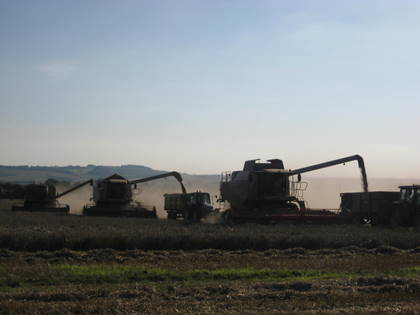 The five combines pictured are a NH CX880 hired in by Mr Lamb, a Lexion 480 and 570 owned by Chalke Valley Farming, a Lexion 520 owned by the Yarrow family and a NH TX66 owned by DG Corbin and Sons.

Among the neighbours who came to lend a hand – and celebrate the end of harvest – was man who used to watch the ‘bagger’ combines used in the 1950s. Everyone who took part was treated to a traditional harvest tea. 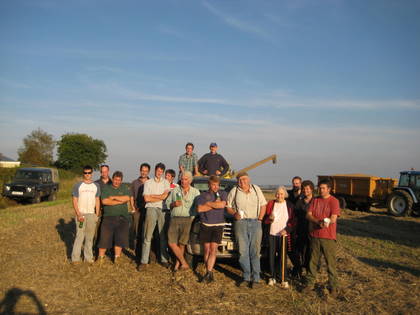