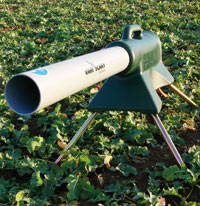 A winter oilseed rape variety from one breeder is proving a hit with some growers because pigeons seem to be shunning it and moving on to other “tastier” varieties.

Compass, which was added to the HGCA 2011/12 Recommended List, is believed to have high levels of glucosinolates in its leaves, which give it a bitter, peppery taste.

Breeder DSV is carrying out tests to establish how high glucosinolate levels are in the Compass leaf, which at this stage, is unknown.

John Rossiter, an expert in plant biology based at Imperial College, London, says the type of glucosinolate and its composition in the oilseed rape leaf could influence whether pigeons like or dislike eating different varieties.

“Glucosinolates have a bitter taste, but also the degradation compounds are potentially toxic,” he adds.

This is backed up by grower observations. David Sowray, a tenant farmer at the Crown Estate-owned Humberton Farm, in Helperby, North Yorkshire, is growing Compass in two troublesome fields surrounded by woods with a history of pigeon problems.

“I have had pigeons coming into the Compass fields, they will eat it, but nothing like as much as the other varieties,” Mr Sowray says.

Mr Sowray says there has been very little damage to his Compass crop, especially compared to other crops grown on the same fields in previous years.

“I have used half the amount of gas bangers I normally would by this stage,” he adds.

“Like last year, this year’s Compass crop hasn’t had much pigeon damage. The pigeons seem to munch a bit of it, decide they don’t like it, and move on to other varieties.”

Five hectare plots of 50 varieties were sown for the trials, which intended to assess the rate of leaf development in different varieties sown early and late.

The Compass plot was surrounded by woodland where Mr Marr estimates some 3000 pigeons gather – but he observed that the birds were leaving it alone.

“The pigeons were flying into the plots and foraging, but they were reluctant to eat Compass,” he says. “Instead, they were quickly moving to other neighbouring varieties.”

Mr Marr chewed some Compass plant leaves and discovered its strong taste. “Compass tastes bitter compared with some other varieties, which could almost pass as a salad,” he says.

Besides Compass, pigeons also seem to dislike Excalibur, he adds. “They will feed on Excalibur if they must, if it is cold and food is in short supply, but they don’t like it.”

Cambridgeshire grower Edd Banks has also seen pigeons shunning Excalibur. “There hasn’t really been any pigeon damage on the Excalibur, whereas our Castille is probably the worst-affected out of all our varieties,” he says.

AICC agronomist Steve Cook believes variety choice could prove useful in fields far from the farm base. “If you have got some land which you are not looking at every day, then that is the place to grow them,” he notes.

Steve Cook believes mixing up your options with some shooting works best. “Most methods, like gas bangers or rockets, will work well for a period of time. That’s why you have to vary or back them up with some shooting,” he says.

“You have to teach pigeons that going into a crop is unsafe, or they’ll keep coming back. Just physically being there to move them on can often be enough.”

Strutt & Parker agronomist Jock Willmott says gas bangers are useful, especially in troublesome areas. “You can angle them into the woods and set them to go off at different times,” he says.

But on the downside, they are expensive (£400 a season) and noisy, which can cause complaints from neighbours, he adds.

They are also highly visible and their parts, especially gas canisters and batteries, are prone to theft, he notes.

Rockets are a cheaper alternative, costing around 98p each, or around £200 a season, Mr Willmott says.

Scarecrows or helikites work well for short periods, but they do give season-long protection and sometimes can break in the wind. But he finds flashing discs are the least useful as pigeons get used to them quickly.