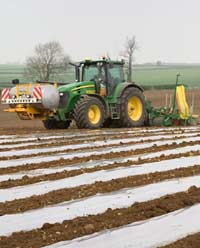 Wet summer and warmer springs could see many maize growers questioning the way they grow the crop. Whether it’s using an earlier maturing variety, or growing under plastic, will depend on individual sites and management practices.

But for Hugh McClymont, farm manager at SAC’s Crichton Royal Farm, Dumfries, a need to spread the risk resulted in him growing 15ha under plastic this year – with the end result a crop ready to harvest now.

“You can imagine how surprised I was when I saw how far on the maize grown under plastic was, particularly after a wet and cold summer, with eight inches of rain alone in August. But this is ready to come out now,” he says.

The only thing that could hinder the crop being harvested at Crichton is ground conditions for the harvester.

The reason for growing under plastic and using an early maturing variety was to spread the risk, explains Mr McClymont. “We wanted to go in early, drilling early April and come off early and this way it allows us to put some back in the clamp earlier.”

This is vital as the 15ha of maize under plastic and 45ha of conventionally-grown maize without plastic form a major part in the rations fed to the 500-cow herd at SAC’s Dairy Research Centre.

“What variety you use and whether you grow under plastic will vary from farm to farm, depending on land use and what you use the crop for. Where the maize under plastic is currently grown will be grassed for an event next year, hence the need for an early harvest,” he says.

The remaining conventionally-grown maize drilled three weeks later at the end of April won’t be ready to harvest at Crichton until mid to late October and this is the scene being pictured across other parts of the country according to Kingshay technical specialist Cath Woods.

Areas of the country where the weather hasn’t been so good over the past few years may be looking at using earlier maturing varieties in future, she says. “It all depends on what is being put in the ground after maize harvest. But in general on good growing sites later varieties are being used as they can get a better crop.”

Agronomist Simon Draper says growing crops under plastic is just one way to bring forward harvest dates. “Despite wet conditions crops under plastic are doing particularly well, but this year the maize crop will be one of the best seen for the past five to six years,” he says.