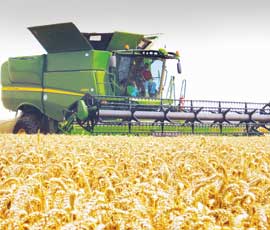 Oilseed rape and wheat are both yielding well at Park Farm, Hanbury, Worcestershire, but rain has prevented further progress this afternoon (13 August).

“We had 10ha of Kite for seed and the rest was Osprey, and both yielded the same – they looked good all the way through, having been sown with a subsoiler seeder, so I’m really pleased.”

“Harvest has been a bit patchy – we’ve done half of one field and then moved into another.”

He had desiccated 16ha of wheat, which would be ready soon, followed by the rest of the wheat and 18ha of spring barley.

“We don’t normally grow spring barley and it’s doesn’t look great. It’s probably six days away, while the wheat is about three days off.”