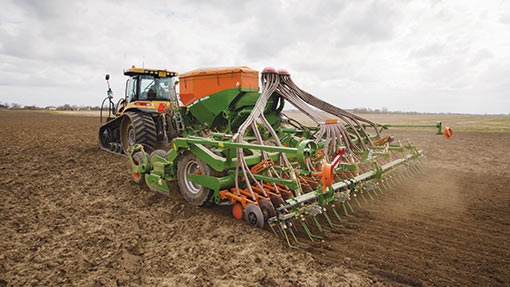 There has been a trend towards direct drilling in recent years, with many ploughs being left abandoned in the nettles as growers seek cheaper ways of establishing crops.

Spring beans are no exception, as growers successfully establish 5t/ha crops using min-till methods. Yet for those with high weed burdens, ploughing may continue to be the best option.

For Kent grower Adrian Clifton, cutting overhead costs and the maintaining viable margins are main priorities when it comes to establishment, which is why he has steadily built up the area of direct drilled crops on the family business on Romney Marsh and has established spring beans this way for the past two years.

Mr Clifton admits he is still on a learning curve, but believes that creating and maintaining a good soil structure is key to the success of direct drilling.

Previously the silty loam and silty clay loam soils were cultivated in the autumn with a Simba SL and then drilled in the spring. But in the past two years, Mr Clifton has used an 8m Sumo Versadrill to drill 140ha of Fuego spring beans into overwintered stubble.

“We can achieve similar yields compared with a conventional system, but the savings in labour, fuel and time in the autumn is a huge advantage,” he says.

“With the DTS using the narrow bean coulters, we had trouble closing the slots. This year we will try the conventional wide coulters we used on the wheat, as I feel the beans will be better spaced.” This will reduce the width between rows from 32.5 to 20cm.

And because of the wet conditions this spring, Mr Clifton feels the use of the tine on the front of the DTS to cultivate before the coulter will help. “We will need to have the patience to wait, though, as we will be moving the soil to a greater depth.”

A good covering over the seed can be improved by using a light roll that also helps the pre-emergence herbicides work better. Mr Clifton feels although the weed burden is reduced, he can’t yet cut his herbicide input.

Chelmsford grower and contractor Robbie Metson is also achieving success with direct drilling with his 6m Claydon drill. In addition to time, fuel and labour savings – which he estimates are upwards of £86/ha on heavy land – he believes the ability to retain moisture is very important.

Mr Metson believes the soil structure is well maintained through incorporation of direct drilling into his rotation. “We do not have the fear of creating a plough pan.”

Grassweed populations are as low as they have been for several years and Avadex (tri-allate), which can be used in beans, has also been brought back into the armoury, with very good results.

It is grassweed control that primarily drives the plough-based establishment for Michael Brown on the chalky boulder clay near Huntingdon, Cambridgeshire.

“Ploughing gives a clean start. And the key to good establishment in the spring is the conditions in which you cultivate in the autumn. If you plough it wet, it’ll stay wet.”

Mr Brown aims to plough by mid-October, leaving the ground to green up before cultivating again in the autumn with a power harrow to break the soil down. The fields are then sprayed off with glyphosate in late February and the beans drilled at a depth of 7.5cm with the 4m Horsch drill any time from the third week of February onwards as conditions allow.

“If fields are a bit rough, we roll so we get better result from the herbicide.”

Mr Brown estimates his establishment costs at £95/ha, although he doesn’t believe the ploughing cost is directly attributable to the bean crop, but is a valuable cultural tool across the rotation.

“It is part of the bigger programme to keep blackgrass low on the farm.”

Average yields during the past five years are 5t/ha. But it is the additional benefits, including the ability to drill later and the N they put back into the soil, that makes spring beans such a good fit on the farm.

Get off to a good start

With achievable yields in excess of 5t/ha, getting establishment and early agronomy right is critical to getting the best out of spring bean varieties. Yet, despite being a crop that does well when drilled early, many spring bean growers will have to be patient this year given the wet conditions, explains PGRO’s Steve Belcher.

“Don’t go by sowing date, go by soil condition – this year it will be well into March.”

Seed treatments are not usually necessary with spring beans, but it is essential to have farm-saved seed tested for germination, freedom from ascochyta and stem nematode.

Tied in with this is advice on row spacing, which is generally “the narrower the better”, says Mr Belcher – between 12-25cm. “More than 30cm and you begin to lose yield.”

Drilling depth should be 5-7.5cm to avoid bird damage and while it might be tempting to push conditions with direct drilling, growers need to be careful the slots behind the coulters do not remain open, leaving a lot of air around the bean, he says.

“Beans that are ploughed, cultivated and drilled prefer a rolled seed-bed to give a good surface for pre-emergence herbicides.”

Pre-emergence herbicides are very important, as the bean crop is not competitive in the early stages, says PGRO’s Jim Scrimshaw. There is a good choice of products for grass- and broad-leaved weed control, including a few Extension of Authorisation for Minor Uses (EAMU).

Tailoring products to weed spectrum is important and stacking residuals is a consideration, as the only post-emergence product, Basagran (bentazone), is expensive, reliant on warmth and light intensity and can give variable results. “Where seed-beds are not great there is evidence that using an angled nozzle such as the Defy nozzle will improve clod coverage.”