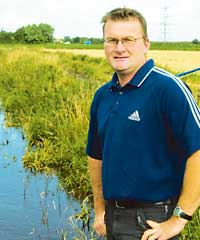 In a Farmers Weekly poll, many thought the Voluntary Initiative/HGCA call to establish 6m grass watercourse buffer strips in oilseed rape and bean fields this autumn was sensible. But only half took the plunge. Andrew Blake reports

Former Scottish Barometer farmer Robert Ramsay, who is growing winter rape this year, though not next to water, was unaware of the VI/HGCA message until contacted by Farmers Weekly.

It was sensible, though not primarily, to retain herbicides, commented Mr Ramsay. “We shouldn’t be polluting watercourses. As farmers, we are subsidised and have to act responsibly.

“I’d like to have buffer strips next to all our watercourses and wildlife corridors. It’s the constantly changing rules applied to stewardship schemes that make this so complicated.

“All watercourses should be surr-ounded by buffer strips and farmers should be paid for this undertaking out of modulated monies. This should be automatic and not involve a complicated scheme.


“I’m just coming out of some old Countryside Premium and Rural Stewardship schemes and found there is no sensible, simple replacement. I don’t have time to learn a new set of rules every year.

“Margins are too tight to do this for free. If this is partially to protect herbicides then the herbicide manufacturers could support this by giving a cashback to all those who could show they’ve followed the guidelines.

“The farmer cannot be the only one to take on costs.”

Norfolk Farmer Focus writer Jim Alston was aware of the call and considered it reasonable.

He already had about 1500m of margins beside watercourses under Entry Level Stewardship and Countryside Stewardship schemes.

“As an industry, we must do everything to prevent field applied chemicals from appearing in watercourses at detectable level. Not to do so will lead to more legislation and further restrictions on the already diminishing portfolio of chemistry available.”

Scottish farmer focus contributor Neil Thomson hadn’t heard of the call, believed it reasonable, but suggested it placed a question mark over the value of LERAPs. “Don’t they work?”

Initially, he calculated the £50 margin loss from a 10ha field with a 400m watercourse boundary might be a price worth paying. “But add the cost of establishing and managing the margin and the equation starts looking different.

“Does banning some actives lead to quicker development of alternatives?” he added.

Lancashire farmer focus writer Martin Lawrenson (pictured above) feared the move might be extended to other crops with acceptance that buffer strips were essential. “I don’t believe that is the case.” Better training and information about different spray chemicals was the way ahead, he believed.

“No farmer wants his spray ending up floating off down a ditch or river.”

Protecting water was very important, acknowledged former Essex Barometer Robert Stevenson. “ELS has provided us with the means to establish buffer strips next to our main watercourses.

“I don’t think we can go establishing grass strips on a one-crop basis – there just isn’t the time in an already busy part of the year. Buffer strips should be permanent. With sensible application of chemicals I think 6m is excessive in some parts of the country.”

Former Lincolnshire Barometer Ben Atkinson, unaware of the call, believed it had been made too late with little consultation.

“I agree watercourses need protection, but many of us have already done a lot in terms of careful placement of ELS margins and careful application.”

One time Scottish Barometer John Hutcheson knew of the VI’s urging, considered it sensible, but already had 6m strips beside most of his watercourses.

“We were in a Rural Stewardship scheme and created these when we signed up. Although the scheme’s finished, we intend to keep them as there have been some additional benefits for the pheasant shoot.

“I think mandatory 6m strips around all watercourses as part of cross-compliance would be a reasonable step and fairly painless for most growers.”

Chris Salisbury, 2002 Barometer in Somerset already with 6m strips under Countryside Stewardship, noted that the penalty from establishing new ones was significantly greater on small fields than on large ones.


“It’s sensible to safeguard our shrinking list of agrochemicals, but agriculture always seems to get the blame. As far as I’m aware, the major cause of atrazine in watercourses was local councils pouring it onto pavements.”

Former North Yorkshire Barometer Andrew Gloag’s policy over recent years has been to establish 6m grass margins against all watercourses, “sacrificing” 2.5-3% of his land.

“If we do not self-police, the cost of losing active ingredients will be far outweighed.” Former West-country Barometer and farmer focus writer Jim Bullock had had 6m grass strips in place for several years. “It avoids having to worry about LERAPs. Is there proof the herbicides we can use are causing a problem? We’ve already created a number of grass margins, but one of the biggest problems is that the general public see them as footpaths.”

“Although the request is well founded, unless the measure was compulsory I honestly doubt if uptake would be sufficient to prevent the spotlight continuing to be shone on the products in question. Only those with the strongest conscience will take up the initiative.”

“A major factor is the inflexibility and short-termism of a lot of older farmers,” he added. “They’ll be the first to whinge when we lose these actives.”