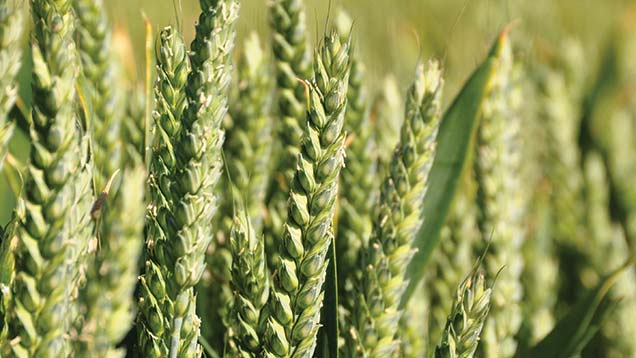 High yields and a strong base price have led to a swing towards growing Group 4 feed wheat varieties, accounting for nearly 60% of the total UK wheat area.

“We have seen a real swing to Group 4 varieties in the past seven to eight years and I can understand why, with the yield premium and strong base price,” says HGCA market analyst Jack Watts.

However, he questions whether the Group 4 swing had been overdone, as it has led to the wrong type of wheat in the UK market.

“Despite last year’s big harvest, there was still a reliance on [milling] wheat imports,” he says.

And it’s not just this season – Mr Watts believes being a commodity wheat producer will become ever more challenging.

First he points to the EU, which is set to become the top wheat exporter this season, overtaking  the US. This will see the EU market becoming more global and will challenge Chicago as the price benchmark.

Second, there is growing competition from maize as the gap between global maize and wheat production continues to widen, with maize rising much more steeply than wheat. More than 700m tonnes of wheat is produced while maize is approaching 1bn.

This is making feed wheat marketing more challenging, as 75% of feed is maize and wheat will need to compete for market share.

Mr Watts believes the effects are starting to be seen on the fringes of the feed market, with more competition from maize imports, dragging wheat prices down.

But he warns that this also brings more risk, as maize is produced in fewer countries that are more vulnerable to extreme weather. “It will lead to bigger troughs and peaks in the feed cereal market.”

With milling wheat, UK demand is relatively stable, but imports have been higher since 2012. Imports more than doubled because of the quality issues in the poor summer of 2013 and have remained higher.

“There will always be a need for imports, but there is an opportunity for UK producers to claim back some of this lost domestic market,” says Mr Watts.

“A lot of this wheat came from Russia, which has its own problems. There is a tremendous opportunity to sell to these markets,” he says.

It was destined for bakers producing wraps and breads, and a poor French harvest had created the opportunity for milling wheat with a spec of 11.5% protein, 250 Hagberg falling number, 76 specific weight and 14% moisture.

“We could have exported way more than this. The ideal varieties are Cordiale, Panorama and Lili and they have been commanding a £20/t premium.”

He believes there could be an opportunity for those growers near ports to grow a Group 2 such as Lili next season, especially as it offers high yields. “If there was more Lili in the ground, we could have exported it.”

One grower planning to grow Lili next season is Suffolk farmer Andrew Read. He supplies Camgrain, growing both feed and milling wheat on his 600ha of cropping, including Group 1 varieties Gallant and Skyfall, and Santiago from Group 4.

“The flatlining of wheat yields is worrying and we need to raise yields, as cost of production will overtake it,” he says. “Another way is to add value by growing something that people want.”

He is looking to replace a proportion of his Santiago with Lili, creating more marketing opportunities.

But Mr Mason warns against a big swing to milling varieties next season.

“We could see premiums falling back to the £3/t level that we saw a few years ago. We need a middle ground,” he says.

KWS cereals product manager Keith Best believes both Lili and Trinity will be accepted by all UK markets including feed, milling, export and distilling.

The new Group 2 Lili at 105% matches Group 4 Santiago and is only marginally behind the more recent introductions Evolution (106%) and Reflection (107%). “On heavy land, it was just 1% behind Reflection,” says Mr Best.

“It is in the middle for earliness, is short and has good stem strength. For disease, it has a 9 for mildew and is excellent for Septoria tritici [6], putting it at the top end.”

Gross margin wise, he calculates at current prices that a £2/t premium will give it a better return than the average of the top three-yielding Group 4 wheats.

“And this is ignoring all the other agronomy benefits,” he says.

“It happens to be a feed wheat which gets some premium. There is also a value in septoria resistance and there is a chance it also will be grown for these other traits.”

“It has good mildew and rust resistance and the high Hagberg means it will be robust in difficult harvests,” he says.

He calculates that the gross margin is better than Solstice and needs a £13/t premium to see any benefit over the average of the top- three-yielding Group 4s.

Mr Best expects Trinity to take 4.5% market share next season and 6% the season after.

Looking to the future, KWS wheat breeder Mark Dodds outlines a pipeline of several quality wheat varieties including RL candidate Siskin, which is a potential Group 2.

All contributors were speaking at a recent KWS briefing.