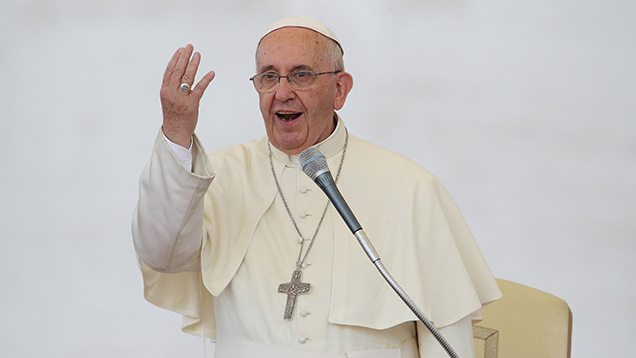 Pope Francis has called for a “scientific and social debate” on genetically modified foods that considers all the information available.

The pontiff said it was difficult to give an overall judgment on the development of GMs – plant or animal – for medical purposes or in agriculture.

Therefore the pope called for the financing of independent and interdisciplinary research to study GMs.

“No doubt there is need for constant attention… to consider all aspects involved,” said Pope Francis.

“To this end it is necessary to ensure scientific and social debate that is responsible and large, able to consider all the information and to call things by their names.

“GMOs is an issue which is complex; it must be approached with a sympathetic look at all its aspects and this requires at least one effort to finance several lines of independent and interdisciplinary research.”

The pope acknowledged that the introduction of GMs in some regions had produced economic growth that had helped solve problems.

However, he also highlighted “significant problems” with the technology that should not be minimised, such as the “development of oligopolies in the production of seeds” and a “concentration of productive land in the hands of the few” that leads to the “disappearance of small producers”.

The pontiff said the spread of GM crops “destroys the complex web of ecosystems, decreases diversity in production and affects the present and future of regional economies”.

On the use of pesticides in agriculture, the pope warned that human intervention to solve a problem “often worsens the situation further”.

“For example, many birds and insects die out as a result of toxic pesticides created by technology. Theese species are useful to agriculture itself, and their disappearance will be compensated by another technological intervention that will probably bring new harmful effects,” said Pope Francis.

The pope’s comments on GMs and pesticides were included in a draft encyclical in which he also called for action on climate change to protect the planet.