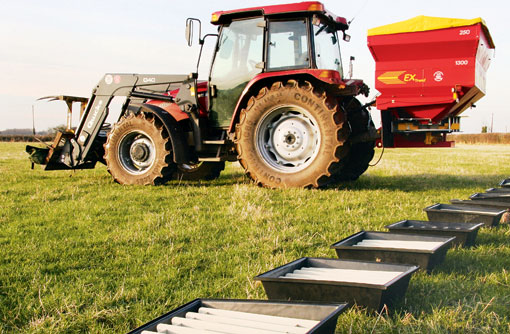 Farmers place a high value on the need to maintain soil potassium reserves, with the benefits of applying potash seen to outweigh the costs, according to a survey conducted this spring by Farmers Weekly.

More than 60% of the 200 respondents to the survey, which was carried out in association with a potash mining company York Potash, said they had not recently deferred an application of potash fertiliser.

A fifth of them acknowledged they had omitted an application for one season – this short ‘potash holiday’ mostly being adopted on farm units larger than 400ha – while 18% had deferred it for longer.

But asked whether or not the farm spend on potash had changed over the past few years, more than half reported it had – the average net increase being 38%.

The main concern was that fertiliser prices generally now accounted for up to a quarter of wheat production costs. But the expected benefits seemed to outweigh the risk of omitting potash.

That is encouraging news to Chris Dawson, of the Potash Development Association, who fears some arable farmers may have reined back on the nutrient to reduce costs in recent seasons.

“I won’t use the term fertiliser holiday as holidays are a good thing and omitting potash where it is needed isn’t. But I’m pleased most growers recognise the risks of cutting back. Potassium is critical to every plant cell to maintain the equilibrium and keep the plant growing, and if it’s deficient, other nutrients, including nitrogen, cannot be fully utilised.”

While a third of those surveyed had seen some indication of nutrient deficiencies in crops during the past two seasons, only 14% claimed to have seen symptoms of potash deficiency.

Mr Dawson said this was not a surprise. “Symptoms are often hidden unless there is a severe deficiency. Yield reductions are often the first indication, but pinning it down to potash is tricky without testing soils and perhaps plant tissue.”

The commonest testing policy among those surveyed was to sample soil every three years, though a fifth of respondents tested it at least once a year. A third left it four years or more.

Though soil sampling was considered the most useful guide to fertiliser strategy, many respondents used agronomists to guide decision making on appropriate treatment, particularly in the south of England. A quarter of respondents saw research as key to deciding whether to use NPK fertilisers, and the same number saw precision farming as equally important.

When asked specifically about precision farming, a quarter had adopted the technique. Of those, the most common advantage seen was greater crop consistency, followed by reduced cost of production.

Just over a third reported reduced fertiliser use, while yield was improved for just under a third. One respondent noted “better targeting of applications rather than a reduction in fertiliser use” with the precision approach.

The majority bought potash in the form of Muriate of Potash, though 43% used manures or litter and 17% used slurry. Of the total surveyed, 39% were now using more than they were five years ago. The average extra usage amounted to 16%.

There was far more manure and slurry used in the South and the Midlands than the north of England, presumably due to a more readily accessible supply. 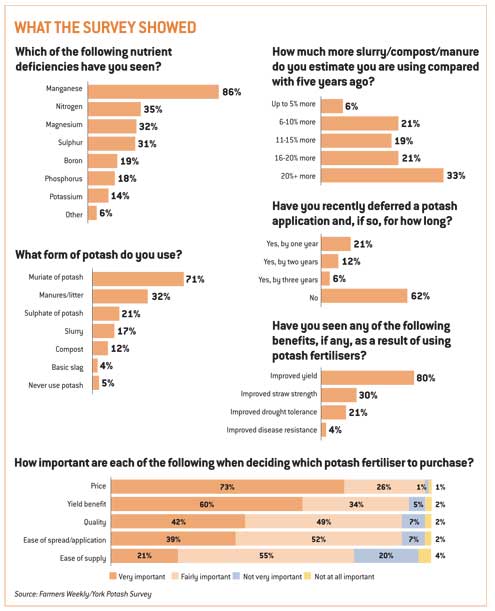 When it came to which type of potash to buy in, ease of supply was relatively important, particularly on the larger units. However, price had the biggest influence on farmers’ potash sourcing policies, with perceived yield benefit, quality of the product and ease of application rated as less important.

The commodity price was seen as the most important factor influencing potash fertiliser buying habits, judging by the survey. More than two-thirds bought on price, again particularly on the larger units.

A typical comment was that potash is an expensive input and soils generally need topping up regularly. One grower “bought two years’ supply as the price seemed to have come down a bit and was expected to rise again.”

Existing supplier relationship came into the equation for half of respondents.

One said “consistency and reliability is vital, linked to mutual trust”, while another said “trust that it will arrive on time and be of good quality.”

When asked which factors have the greatest impact generally on fertiliser pricing, almost half thought energy and fuel prices were mainly responsible. Global supply and demand was rated the greatest influence by 26%, and grain prices by 22%.

Graham Clarke, operations director at York Potash, confirmed that no matter what fuel costs are involved in making the products, fertiliser prices are driven by supply and demand.

On average, 72% of respondents spot buy. Rarely were any growers buying forward by two years, but a large proportion of medium-sized (more than 200ha) and large farms bought forward by one year.

A third claimed to know where their potash was sourced from, and of those, 80% believed it originated from the UK. One grower who sources a UK supply said “consistency of sourcing is important because I know the spreader settings for the Amazone spreader”.

In reality, up to half of our current domestic supply is imported from Germany, said Mr Clarke. He was pleased that a fifth of those surveyed, when asked specifically about the need for UK sourcing, said they considered it important.

“A third thought it vital to have a UK potash supply, and three in five said it would be preferable. Thirty per cent were aware of the York Potash Project, our detailed scoping study to establish the potential to mine polyhalite as a source of Sulphate of Potash. Currently, polyhalite isn’t processed in the UK.”

Half of all respondents were generally in favour of supporting York Potash to secure a UK supply, and 18% said they would wholeheartedly do so. The majority of those were middle-sized farms in the North.