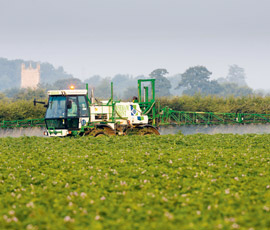 The potato industry has just received a major cash injection for research projects tackling the biggest threats to growers’ pockets. Adam Clarke looks at how it will be spent

Three out of the four research projects receiving nearly £3m in new public funding are specifically aimed at providing the potato industry with solutions to its biggest problems.

The announcement comes after the first round of awards from the Biotechnology and Biological Sciences Research Council’s (BBSRC) Horticulture and Potato Initiative (HAPI).

The Scottish government also contributed £627,097 of the £2.99m towards the research.

HAPI aims to support high quality, industrially relevant research for potatoes and edible horticultural crops and has a £7m pot of cash to share between the most worthy projects.

Potato Council head of research and development Mike Storey believes it is an important development that the potato crop has been given the lions share of the funding.

He explains that the initiative will help bring ideas and solutions down the chain, bridging the gap between scientific university and institute research and the more applied work carried out in the field.

“Without this funding that wouldn’t be able to happen and it will also free up levy money that the Potato Council has, which can be distributed elsewhere,” says Dr Storey.

There will be a second round of funding in the future, with a further £4m of the HAPI fund up for grabs and Dr Storey hopes there will be a string of projects going forward that will address more problems within the industry.

So what are the projects?

The first of the three projects, headed by the James Hutton Institute, will use the potato and onion as model crops and with both genomes mapped; scientist will be looking for the genetic mechanisms that control dormancy.

Losses from the sprouting of potatoes in long-term storage are extremely costly for growers and control methods are also expensive and unsustainable.

The use of chlorpropham (CIPC) as a sprout suppressant in store to prevent ware potatoes breaking dormancy is under threat, as residues have been found fresh and processed potatoes.

“There could be potentially exciting results if those genes are identified, as they could be introduced into varieties to give us better control of sprouting and reduce losses in store, while reducing reliance on chemical control,” explains Dr Storey.

“Understanding dormancy break may also allow us to manipulate the behaviour of seed ahead of planting.”

The second project led by the University of Leeds is taking a look at biofumigation for the control of soil-borne pests and pathogens in potato and other horticultural crops.

The biggest pest enemy currently facing potato growers is potato cyst nematode (PCN) and in particular, Globodera pallida, which is more widespread than other important nematodes.

“The portfolio of G pallida resistant varieties is not good and the industry is facing a huge challenge to combat the pest,” notes Dr Storey.

Chemical control of PCN with nematicides is effective, but is under threat due increasingly tight pesticide regulation, so a more sustainable alternative is needed in the near future.

Many growers are already showing an interest in crops, such as certain mustards, which can be grown and incorporated ahead of planting to reduce PCN and other soil-borne micro-organisms and pathogens.

“We know that these crops do provide control, but the research will try and establish how they work and how growers can use them to the best effect,” says Dr Storey.

The third project that will benefit the potato grower will look at integrated disease control methods, using potato blight as the example model.

The use of two or more control methods for controlling diseases such as blight is considered the most sustainable, rather than over-reliance on one method which can lead to resistance in the pathogen population.

The work, which will be carried out at Rothamsted Research and involving chemical giants BASF, Syngenta, Belchim and also Potato Council aims to model the durability of integrated control strategies and determine their durability.

“It will integrate cultivar resistance and fungicide use and produce and indication of the most reliable control strategies to prolong the life of both in the face of shifting blight populations,” says Dr Storey.

Dr Storey believes it is a huge positive that potato blight has been chosen as the example, as potato growers will be the first to benefit from the work.

“Many of these projects can have relevance to other sectors and pathogens or pests, but it takes time to cross over,” he adds.