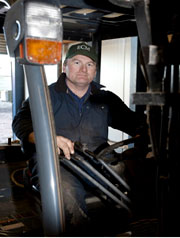 The days are flying by at the moment as we try to get through our spring workload. Good weather, early mornings and late nights have meant that we are ahead of last year.

Potato planting is progressing nicely with ground conditions almost perfect. Well, we thought we were doing great until a phone conversation with a Potato Council researcher who told us that everyone else that he had spoken to that day had already finished planting.

Carrots have been sown into moist seed-beds and they should be emerging soon, hopefully without the problems of uneven emergence that we had last year.

Unloading of our potato stores has been steady with good demand for our chipping potatoes. We have usually sold everything by now but we held on hoping for prices to rise. Although they have broken the £200/t barrier, they do not look like they will be rising to the prices that some were predicting earlier in the season.

The end of the tax year on 5 April was an opportunity to reflect on last season. Generally, prices were pretty good for what we produced. That meant we could invest in some new machinery, also taking advantage of the 100% tax relief available.

But the price of fuel, fertiliser, electricity and gas really increased our overheads, which means that our selling prices cannot drop back to where they were a couple of years ago. With Tesco posting a record pre-tax profit of some £3.8bn – a jump of 12.3% from the previous year – it appears that despite higher retail prices consumers are still spending.

Overall, it was a pretty good year and a repeat this year would be great, but my natural pessimism is telling me that Sod’s Law will throw a spanner in the works somewhere to bring us down to earth again.