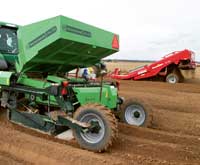 UK potato plantings have fallen by 2.6% to 126,887ha in the last year with the 2010 crop occupying the smallest area since 2005, according to new Potato Council figures.

Jim Davies, senior analyst at the Potato Council, says a large supply last season dragged down the average price to £110/t. In line with long-term supply and demand trends, it was no surprise that there was a fall in plantings this year.

Maris Piper remains the most dominant variety, accounting for 18% of the planted area, covering 17,898ha in England, 5065ha in Scotland and 90ha in Wales. “Maris Piper is an interesting, dual purpose variety which is good for chipping, but also popular in the packing and the bag sectors,” says Mr Davies.

Estima remains the second-ranked variety, although its area has halved from 15,471ha in 2005 to 7993ha. Its market is predominantly pre-pack.


Lady Rosetta, a crisping variety, remains third-ranked (6950ha) while Markies (6832ha), in fourth place has shot up the rankings since 2005, seeing its acreage grow three-fold. “Markies is becoming popular, especially in the chipping and processing market,” Mr Davies suggests.

Maris Peer (5574ha) is placed fifth, having maintained similar areas since 2005 as a pre-pack variety, mainly marketed as a salad or a new potato. And Harmony (4112ha) is another strong emergent variety aimed at the packing market, having jumped from 19th to sixth place since 2005.

Hermes (4102ha), mainly a crisping variety, has risen from ninth in 2005 to seventh place while Marfona (4061ha) has been steady in eighth place for six years.

These top eight varieties account for 50% of all plantings. Other varieties which have moved up the rankings strongly include Melody, Rooster, Cabaret, Innovator, Accord, Vales Sovereign, Agria, Amora, Sassy, Vales Emerald and Mozart.

Significant declines in area over the last six years have been noted for Pentland Dell, Nadine, Cara, Romano, Sante, and Ambo.

Looking forward, Mr Davies reckons it is too early to say whether varieties on the up, plantings, such as Markies, Harmony and Melody, will continue their upward trend over the next few years.

• The latest figures are based on a sample of 2314 growers, representing 85% of the growing area.