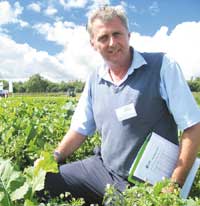 Getting the right herbicide mixture on at the right time was crucial for controlling weeds in potato crops, said Jim Rennie (left), technical sales director for CSC Crop Protection.

“We’ve lost important active ingredients, so we have to do the best we can with the few we have left.”

Seed growers were most at risk as crops offered less competition against weeds and they weren’t able to use the contact material rimsulfuron as a backup plan, he told visitors to this year’s Potatoes in Practice event at Balruddery Farm near Dundee.

All growers, however, should aim to achieve robust weed control early on. “We are very keen on applying pre-emergence herbicides from 15 down to five days before emergence, even if there is a lack of moisture.”

Trials applying residual products immediately after drilling, when there was generally more soil moisture, had shown significantly poorer performance, he explained. “Weed control was reasonable, just after the crop emerged, but they seemed to run out of steam. Because they are exposed for five to six weeks before the crop emerges, the sunlight could be breaking them down.”

Waiting until the traditional timing of 10% emergence also had its drawbacks. “Some of the current products can check the crop if applied at this time which can reduce yields.”

Mixing a highly soluble product with one of lower solubility tended to give the best results, he reckoned. “Defy (prosulfocarb)/metribuzin is a good broad-spectrum mix and performs well whether it is wet or dry. Metribuzin is highly soluble and Defy less so.”

This was a particularly good option for annual meadowgrass control, he said. “Clomazone and metribuzin is probably the best mix for broadleaved weed control, and is very good for controlling fumitory.”

However, growers should make sure metribuzin was not applied to intolerant varieties. “For example, Cabaret looks dreadful for about six weeks after it has been applied and it can damage yields badly.”

For weeds germinating post emergence, contact material Titus (rimsulfuron) was the only option, but was only available to ware growers, he said.