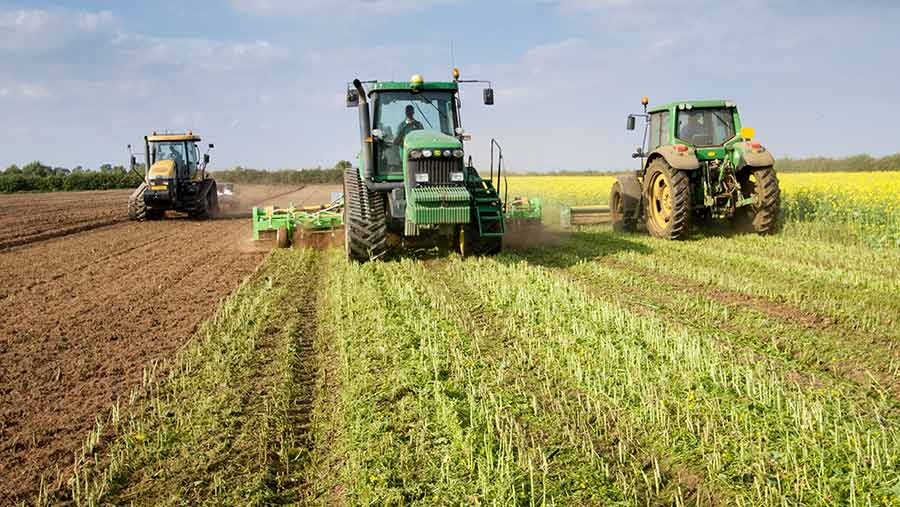 A Shropshire estate being tested by very high levels of potato cyst nematode (PCN) is throwing open its gates to allow other growers in the region to learn from how they’re tackling the persistent pest.

Matthew Wallace, farms director at the Heal Estate signed the farm up to become the AHDB Strategic Potato (SPoT) farm for the West.

PCN is the number one problem challenging the profitability of the 560ha of potatoes grown by the estate in a one-in-five rotation across their total of 1,820ha of cropping.

Spuds are still a profitable crop in the right circumstances, Mr Wallace says, but continuing to grow on land where pest numbers are high is increasing growing costs and building up the problem for the future.

Nutrition levels have to be increased in order to compensate for the damaged rooting structure, and the increased number of smaller potatoes mean more fall through the webs and make a reservoir for PCN through the rest of the rotation.

Heal Estate grows mostly for the crisping market, with Arsenal its most common variety, which offers both PCN resistance and a level of tolerance.

That means the variety is able to break the lifecycle of PCN (resistance), and able to still produce a decent yield in an environment with nematodes present (tolerance).

However, with nematode numbers continually on the rise, Mr Wallace acknowledges this is a problem that will need more radical solutions than those employed in order to continue growing potatoes over the same area at profitable yield levels.

That’s why the estate has turned over one of its worst fields, where PCN is numbering at between 400-500 eggs/g, 10 times the amount normally regarded as a problem, to a variety of AHDB-run experiments looking at fresh ways of tackling the pest.

These include variety trials, biofumigation and trap cropping experiments, and a first look at the impact of a new chemical control. 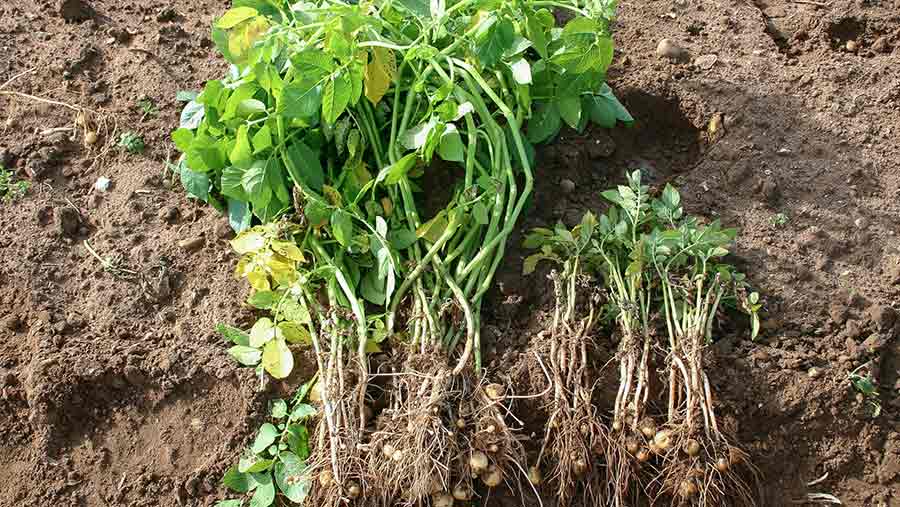 Based on fluopyram, an SDHI on the market as a wheat fungicide, the chemical could be repackaged as a fresh chemical control for PCN.

Although it won’t be licensed until 2019 at the earliest for widespread use, the chemical is under trial at the crop site both used on its own and as a mix with current nematicides such as nemathorin and oxamyl.

Speaking at the first SPot farm meeting, Nigel Adam, Bayer development manager, said previous trial work had demonstrated a yield increase of 11t/ha between an untreated plot and one treated with a half rate of nemathorin and fluopyram.

The chemical is likely to be applied in a liquid form either during bed formation, no more than three days before planting, or as an in-furrow spray similar to Amistar (azoxystrobin).

One of the most significant parts of the trial area has been given over to a formal four-times replicated trial of eight varieties to test their tolerance and resistance to the most common nematode type in the area, Globodera pallida.

AHDB Potatoes knowledge exchange manager, Anne Stone, reminded growers that tolerant varieties will produce a good yield in spite of a PCN presence, but they cause a rapid build-up of egg numbers which will have a greater effect on future cropping.

Resistant varieties, such as Innovator, are able to break the lifecycle of PCN by preventing the female from forming a bond with the potato plant root, and preventing the pest from replicating, but they will not yield well in the process.

That is why the holy grail is to find as many varieties as possible that are resistant, tolerant, and acceptable to the end user, be it for packing, crisping, chip shops, or another market.

Results on these two trials will be available at a results day in December, with the precise date yet to be announced.

Keep up to date with other AHDB Potato events, including information on the other SPot farms in the South West, the East, and Scotland by visiting the AHDB Potato website.

Strategies being investigated at Heal Estate, Shropshire, AHDB’s SPot farm for the West