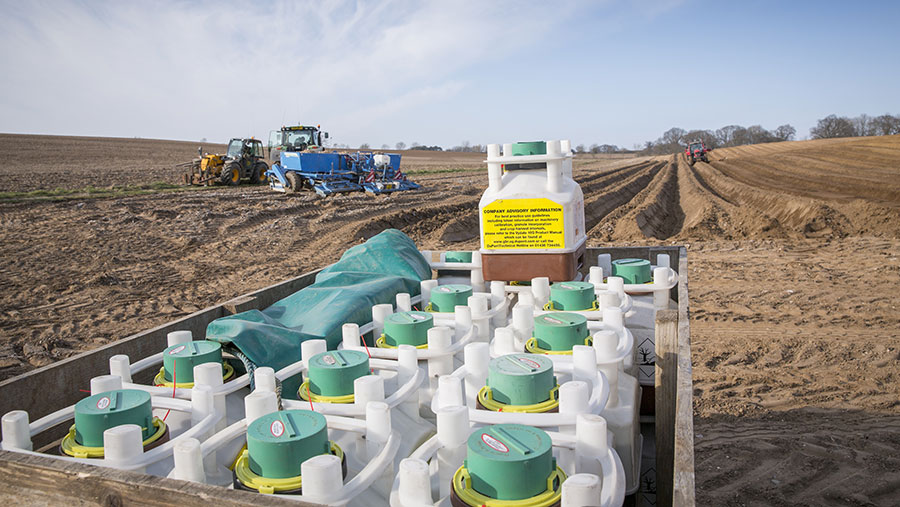 Potato growers have lost another vital tool for controlling potato cyst nematodes, following the UK government’s decision not to reauthorise the use of the pesticide Vydate (oxamyl).

Manufactured by Corteva Agriscience, the nematicide was a valuable product for controlling potato cyst nematode (PCN), especially in shorter-season crops.

It means Vydate can no longer be sold, distributed or used in the UK. The storage and disposal of the product has been approved until 28 February 2021.

The loss of Vydate leaves growers with two products for managing PCN, Nemathorin (fosthiazate) and Velum Prime (fluopyram). A key feature of Vydate was its 80-day harvest interval, compared with 119 days for Nemathorin, which will make control of the pest more challenging in short-season crops such as new potatoes.

The NFU is urgently engaging with Defra to discuss this decision and the practicalities of its disposal plan.

NFU vice-president Tom Bradshaw said: “It is extremely disappointing that Vydate will not be reauthorised by the UK government, and it is unacceptable the announcement was made just one week before the authorisation ended, with no time for growers to prepare.”

He added that there were concerns about the realistic prospects of the industry being able to dispose of the product by the end of February, given the lack of notice and relatively short window for the manufacturer to arrange collection.

“It is an effective and affordable part of many growers’ integrated pest management plans, and we are supporting emergency authorisation applications submitted by industry.”

Potato growers have seen a number of product losses in recent years, with last season being the first without key desiccant diquat and Mocap (ethoprophos), a key pesticide for managing wireworm.