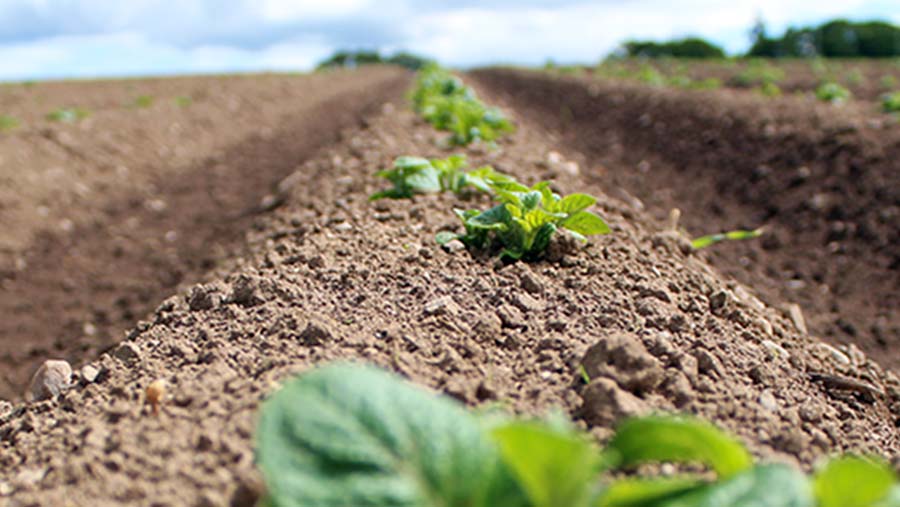 Work is under way at a potato farm in Scotland to apply spud research in areas including cultivation, seed spacing and cover cropping at commercial farm level.

The AHDB’s new strategic potato farm (SPot), Bruce Farms of Perthshire, is based just outside the village of Meigle, about 14 miles north-west of Dundee in one of Scotland’s top growing areas.

All potatoes grown across about 270ha of owned and rented land are sent to Albert Bartlett in Airdrie to be processed.

Spud varieties grown commercially on the farm include Maris Piper, Maris Peer, Saxon, Osprey and Bartlett’s renowned Rooster variety, with planting beginning in late-March and harvesting up to the end of September.

The farm joins the already well-established SPot farm network to become this region’s first demonstration hub for potato growers and suppliers, applying AHDB scientific research on a farm scale and helping growers to implement changes on their own farms.

Following a soft launch last year, this season marks the start of the three-year Scottish-government-funded work on a 36ha field growing the popular variety Maris Piper.

Claire Hodge, AHDB Potatoes knowledge exchange manager for the region, explains planting different varieties for the trials work would have added another layer of complication.

“Most growers can relate to growing Maris Piper and the messages are relevant to all farms whatever varieties they are growing,” she adds.

The primary focus was a simple comparison of different primary and secondary cultivation techniques, such as bed-tilling and stone separating, across the field with the help of precision farming data.

“We aim to be forward-thinking and to produce the best commercial potato crops we possibly can on our own and rented ground across Perthshire and the Borders,” says Bruce Farms’ potato manager Kerr Howatson.

Recent AHDB research has been looking at reducing cultivations to cut costs and increase workrate and productivity.

The ideal seed-bed for growing a good crop of spuds should be fine, friable, free-draining and structurally stable.

Previous work found soils shouldn’t be cultivated deeper than about 11in, or 9-10in for clay soils.

Shallow destoning saw work rates speed up by 20-40% helping improve timeliness, meaning soils were able to be worked on closer to their optimum moisture levels to lessen compaction.

Following preliminary work at Bruce Farms last season, which looked at various treatments and cultivation depths, two of these methods (see “Cultivation trials”) were carried forward for this season.

Last year, the best packout (saleable crop after grading out rejects) came from treatment 2, showing that no bed-tilling and reduced destoning meant lower planting costs and the highest packed yield.

“As a grower we are looking for good packout figures, so Albert Bartlett took eight individual blocks from the trial field last harvest and ran them each through the packing process and then we were able to know exactly what we would’ve been paid which is really useful,” says Mr Howatson.

The same will happen again this year to help weigh up which treatment is best.

Following positive results when using cover crops at the SPot Farm in Staffordshire with benefits to soil structure, the Scottish team are hoping to replicate some of this success.

A section of the trial field typically lies wetter due to it being heavier land, so a selection of cover crop mixes (see “Trialled cover crop treatments”) were sown on 3 September to see if any of these would help reduce moisture levels in the soil.

“The aim was to use the cover crops to dry the soil out and improve soil structure to bring this part of the field up to the same standard as the rest of the field,” explains Mr Howatson.

The cover crop mixes were then ploughed in on 14 March.

Oats were the standout species performer, notes Mr Howatson, with the cover establishing well and resulting in a better structure, with a finer and more open soil but none of the species had much of a drying effect.

“In previous years we have had to bed-till the whole field and we bed-tilled the bottom section this year. While cover crops had helped with the moisture, we did still need to bed-till – we tried a bit without and it didn’t work.”

Getting the right tuber size is critical and spacing of seed has a big impact on the size of tubers.

Mr Howatson says this is all about working with the customer to get seed spacing right to produce the correct size potato, as well as the yield.

“Marketable yield is more important than simply the volume of potatoes produced,” he stresses.

Generally speaking, narrower spacing will result in smaller spuds, and wider spacing will give bigger potatoes but has the potential for a lower yield, so this research is about achieving the right balance to hit an optimum.

Based on tuber counts last year, the optimal spacing was 38cm between seeds.

Another area the trial focused on at planting was the way in which seed is handled before it touches the soil.

Standard pre-planting practice at Bruce Farms is to take seed out of store three or four days prior to seed going in the ground to allow time to warm up.

“We wanted to see the effect of planting seeds straight out of the store, if there was any difference,” explains Mr Howatson.

He notes he would be surprised if there was much difference in establishment this year as soil conditions and temperature were excellent at planting.

Ms Hodge says plant emergence times are recorded between the seed direct from the store and seed that had been prewarmed and adds while any effects might have less of an impact this time, they could be more profound in a less-than-perfect year during the course of this project.

“The idea with this is also to show that it is really important to handle seed well to be efficient in what you are doing at planting,” says Ms Hodge.