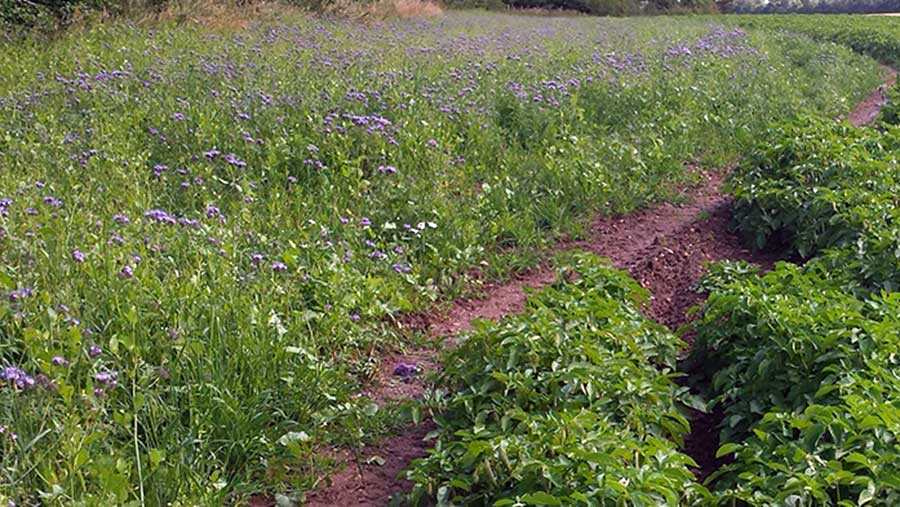 No credit needed - do not reuse

Wildlife and soil health are set to benefit from cover crops being established on field headlands across 30 potato farms this season.

This follows a successful trial on a total of 28ha of field perimeters farmed by seven different growers last year, with the aim of reducing the risk of soil erosion while offering a food source for insects.

However, that leaves them at risk of soil erosion or mechanical damage. In the trial, farmers established a“green headland” cover mix of vetches, berseem clover, phacelia, oil radish and buckwheat.

Instigated by Asda growers, the cover cropping is to be rolled out across 100ha to 30 farms this season after independent monitoring of the trial revealed the flowering mixture was supporting a wide range of insect life.

The 11,000 insects collected from a single visit to each of the seven trial areas revealed 140 different species, including 29 predators known to be beneficial to crops and 118 potential food species for game and other farmland bird chick rearing.

One of the key benefits of the trial mix was its ease of establishment, says participant Adrian Baker, farm manager at FB Parrish and Son.

“Soil protection is vitally important on our light greensands,” he explained. “The cover crop was simply direct drilled on the headlands, and got away and grew without us spending too much time on it.

“We also noted that the green cover was effective in reducing the risk of soil erosion during potato and onion crop irrigation.”