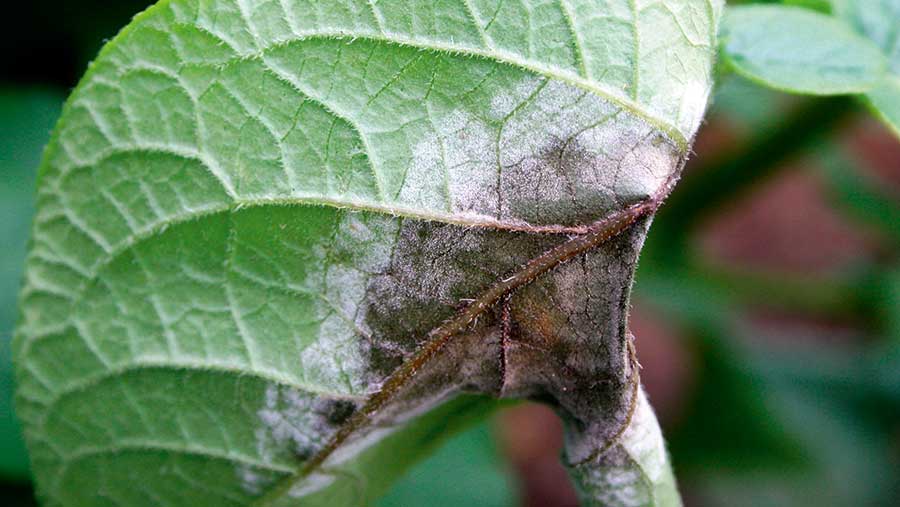 An early start to blight fungicide programmes, followed by meticulous spray timings and robust application rates are crucial to keep a lid on late blight for one Somerset potato producer.

The typically wet and warm West Country climate is famed for its propensity to breed septoria in wheat crops and it is no different for late blight in potatoes grown in the region.

Philip Vaux of D Vaux & Sons is a third-generation farmer at New Rydon Farm, South Petherton, just west of Yeovil. He grows about 95ha of crisping potatoes across a range of soil types.

He tells Farmers Weekly the local landscape also works in favour of the number-one potato disease and requires growers to be vigilant against outbreaks throughout the growing season.

See also: How to stop ‘stealth’ potato disease sneaking under the radar

“Down here we have hedgerows and tree lines around small fields, so you can get blight pockets. If you have trees on three sides it can create a micro-climate with a more humid atmosphere and that encourages blight,” he explains.

As a first line of defence the farm tackles potato volunteers in wheat drilled after the previous year’s crop with florasulam/fluroxypr mixes, taking out a potential source of late blight inoculum.

Mr Vaux also sells all his outgrades as stock feed, so he has very little waste from the grading process and has just one dumping site close to the farm.

“As it is close by, it is easy to keep an eye on and we don’t tend to have any serious problems with it. If there’s any growth [on the outgrade pile] we will knapsack spray it off as soon as possible,” he adds. 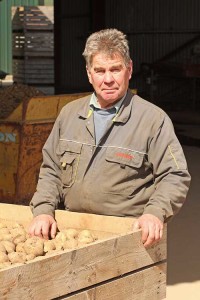 Planting of the farm’s Lady Rosetta and Tauris crispers started on 23 March this year and it has been a stop-start affair due to persistent showers and cold soil temperatures.

The farm’s Agrii adviser, Matthew Alford, who walks about 300ha of potatoes from north Devon to Yeovil and down to Exeter, believes Mr Vaux’s earliest crops will emerge in the first week of May. He says as soon as the crops come through the ground and produce leaves, the blight pressure is on.

He is also cautious of the now-dominant Pink_6 and Blue_13 blight strains. They are much more aggressive and start to cycle at 7-8C, rather that previous Smith Period guidelines of 11C.

“You need to be in with the first spray at the early rosette stage, as soon as you see any green leaf. With these strains, you can’t afford to go out beyond five- to seven-day spray intervals,” says Mr Alford.

This is a tough pill to swallow for Mr Vaux, who would like to stretch timings and use cheaper products to cut production costs. However, he admits it is tricky to do this in the south-western climate.

“We just don’t get the weather to enable us do that and it just isn’t worth the risk to cut back rates. Some people try, but end up with problems,” he adds.

Cold and wet soils are not giving crops an ideal start and Mr Alford believes emergence could be staggered this season, with 50-75% of the crop up and away and the rest yet to come through.

This could compromise the ideal timing of first sprays and some 25-50% of the crop could be left untreated for longer than it should be.

“It is going to be difficult to get away from that, but ensuring you are back in with the second spray no more than five days later will help.”

Mr Alford prefers fluazinam-based sprays to start the programme, aiming to coat the ridge with the product to give some protection against tuber blight.

Shirlan comes first, followed by Kunshi as the second spray. Mr Alford tried it for the first time last year and liked the convenience of having two key actives – fluazinam and cymoxanil – in one can.

“I think the second spray in the programme is its best place, but it could also be used later for tuber blight – just watch the harvest seven-day harvest interval. Shirlan doesn’t have one at all,” he explains.

Mr Alford adds that Kunshi could also be of interest where timings slip, potentially partnering it with a product such as Ranman Top. “You get about a 24-hour kick-back from the cymoxanil, which could help if an interval is stretched.” 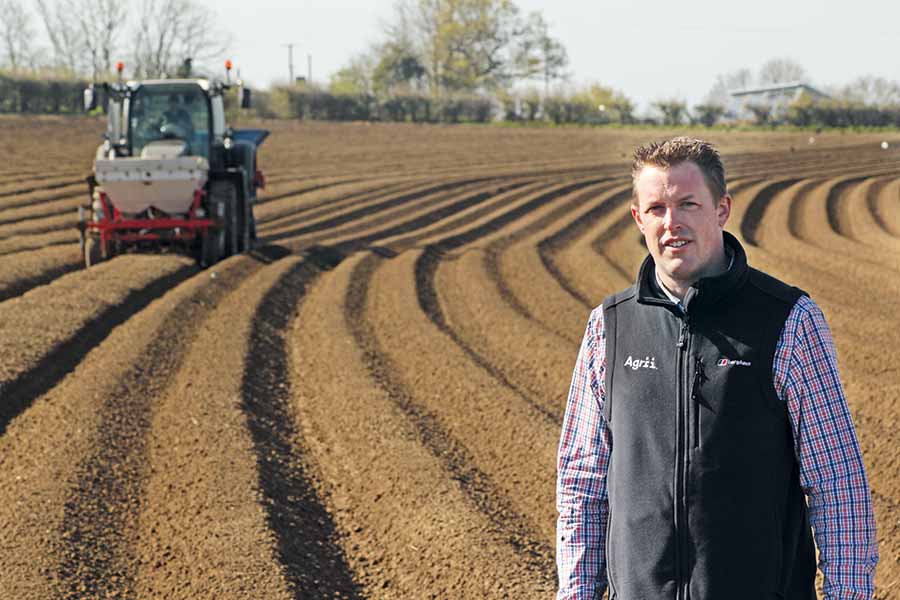 When crops start to motor and enter rapid canopy stage, protecting new growth is critical. Switching to the best products results in the lowest risk and can offer one or more of contact, translaminar and locally systemic activity.

Mr Alford favours alternating Revus, Ranman Top and Invader through this period, plus or minus cymoxanil. However, even with the most highly active products, intervals need to be kept tight to protect the developing canopy.

“You can’t expect even the best products to cope in a crop that can double or even triple in size in six to eight days, so you need to be on a maximum five-day spray interval,” he says.

While late blight is the biggest concern, alternaria or “early blight” has been an increasing problem for Mr Vaux. He believes it is down to a combination of the weak resistance of varieties and changing weather patterns.

The disease tends to appear in crops during August, particularly after alternating dry and wet periods, which can stress plants.

“We use foliar nutrition and seaweed through the stressful times, as alternaria does attack stressed crops, so that helps to reduce the risk,” says Mr Vaux.

Once crops reach stable canopy, Mr Alford recommends dropping products such as Profilux and Amphore Plus into the sequence to offer activity against alternaria, while maintaining control of late blight too.

The typical 15-18-spray programme is then finished off with two applications of Shirlan included in desiccation sprays. This protects daughter tubers from infection before going into store.

Through the sequence, application timeliness and quality is crucial. Mr Vaux has a tractor-mounted 3,000-litre Amazone 24m sprayer with a front tank. It has the capacity to get through the crop in one to two days if necessary.

Mr Alford advises using a water rate of 200-250 litres/ha depending on the size of the crop. He says higher water rates causes a risk of product run-off and reduced efficacy.

“I would opt for 200 litres/ha early on and once rapid canopy arrives, go up to 250 litres/ha. Don’t use low-drift nozzles at lower volumes, as you will get lower coverage and some products have limits on low water volumes too,” he says.