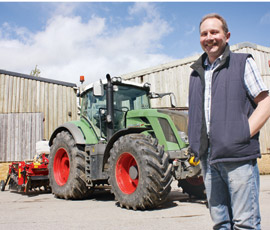 Until now substituting artificial fertiliser with livestock manures for potatoes has been a fairly unscientific art. This year a trial is taking place to assess the potential for significant cost savings, as Nick Fone found out

A group of West Country potato growers is looking into the opportunities to substitute artificial fertiliser with livestock manures, cutting fertiliser spend.

The growers are all part of a Sainsbury’s potato development group formed to look at a range of issues in the supply chain. Steered by marketing outfit, Greenvale, the group has been split into regional teams each exploring a different angle – cultivations, water use, storage and nutrition.

“We’re trying to pin down the key topics that will affect the sustainability of supply in the future,” explains Jamie Lee, Greenvale’s group technical manager.

“Having the south-west growers look at nutrition is no accident – the high livestock numbers in the region mean there are plenty of alternative fertiliser sources available.”

While growers in the east of the country are more limited in their options for access to manures, producers in the traditional livestock regions have opportunities to cut right back on their artificial fertiliser use, believes Mr Lee.

“It’s not unusual for us to see soil P&K indices of over six were muck has been spread year after year.

“In the past growers have supplemented that as a matter of course, taking levels well over crop requirements and Fertiliser Manual (RB209) recommendations.

“We’re hoping this trial will show there is no detrimental effect in relying on innate levels of phosphate, potash and even nitrogen, topped up with manure.”

The hope is that growers will be able to cut right back on their use of fertilisers, slashing their costs and minimising their operations’ environmental impact.

“We want producers to be confident that they can cut back on artificial sources if soil and manure tests show it’s not necessary,” says Mr Lee.

Potato and poultry producer Nick Bragg is one of the growers tasked with looking at alternative options for potato nutrition. He has set up a trial on his South Petherton farm to measure the effects of using varying levels of chicken muck and artificial compound fertilisers.

Rearing some 820,000 chickens each year under the RSPCA’s Freedom Foods banner, there is no shortage of muck at Frogmary Green Farm.

Much of the land used for potatoes is virgin ground rented from nearby dairy farms. Consequently P&K levels are rarely an issue, although water retention can be.

“We tend to chase a seam of sandy clay that runs through from North Dorset, but of course the issue with that is that it hasn’t got the water-holding capacity,” explains Mr Bragg.

“Without irrigation we need to introduce organic matter to keep hold of the moisture and the chicken litter is perfect for that as well a providing NPK.”

In the past potato seed-beds have had a 120kg/ha application of liquid 16:16:0 at planting. But this year sees a move to a 900-litre/ha dose of 7:7:12 to try to balance crop requirements against innate soil levels and what’s provided by the manure.

Soil and muck analysis is used to help in this decision-making process, but it is felt that it needs to be improved upon, especially with spiralling fertiliser prices.

The cost of a 900-litre/ha application of 7:7:12 is currently about £234 so there is potential for some fairly significant savings. While Mr Lee believes it could well be possible to do away with most artificial fertiliser, Mr Bragg is a little more cautious and hopes to halve rates.

While nutrient levels in the poultry muck generally hover around 36kg/N/t, 17kg/P/t and 26kg/K/t, the same can’t be said for soil indices which vary wildly, so matching both to crop requirements is a tricky business.

“We’ve been paying much more attention to muck applications over the last three years and have bought an ultra-accurate Strautmann spreader to make sure it’s applied evenly, which we’re managing even on 24m tramlines.

The muck and fertiliser trial at Frogmary Green Farm is taking place in one field which, although already tested for P&K, will have mineral nitrogen samples taken much closer to planting (as the weather permits).

Six different treatments will be employed:


Though this is in no way a scientific experiment, through the growing season assessments of the crop canopy will be made and then at harvest yields will be recorded from each of the trial plots. Quality will also be scrutinised such as skin finish and size.

“However, where we haven’t spread any muck, moisture retention isn’t likely to be as good and we could possibly end up with a bit more scab.