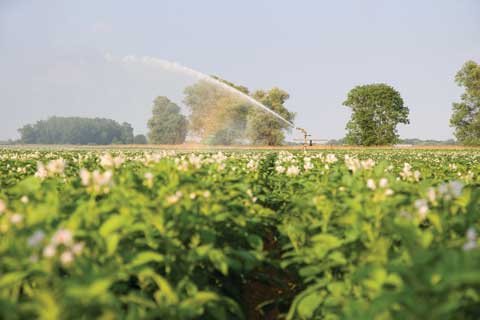 With a large part of the UK suffering from the continued drought, Will Wilson looks at the latest advice for growers facing irrigation restrictions this summer

The 12 months up to January was the eighth-driest year since records began and unless there is substantial, above-average rainfall in the coming weeks, growers will almost certainly face water restrictions this summer.

“Some growers are facing a tough decision on their cropping plans this year,” says Mark Harvett, senior adviser at the Environment Agency. “It’s a big gamble and we recognise that fact.

“We need above-average rainfall and it doesn’t look like we will get that,” he adds. “If we don’t and river levels are low, we will have to limit extraction.”

In the short term, the Environment Agency has put forward a number of measures outlined in its Regulatory Position statement. “For example, we are tying to look at ways to relax licensing conditions,” says Mr Harvett.

“We are looking to give growers more flexibility in topping up reservoirs; the key thing is pump capacity.” Growers can now apply to the Environment Agency to increase their daily, hourly and instantaneous rate restrictions on their licenses. “This will allow them to grab water quickly when it is available, such as during periods of high river flow.”

The increased pumping rates would be time limited, in line with the area’s Catchment Abstraction Management Strategy or for a single year while other provisions are made.

“We also want to try and temporarily extend the licence period, so growers can take as much water as their licence allows.” Most winter abstraction licences stop on 31 March. Growers wishing to extend this can apply for an extension allowing abstraction through April.”

The Environment Agency is also considering applications from winter abstraction license holders to allow short-term abstraction during high flow rates in the summer. And growers granted summer abstraction to fill winter storage reservoirs will only be charged winter rates, he says.

In some cases growers going down this route will need to install calibrated measuring devices to know when high flows are available. The Environment Agency will also need time to calculate stop-start levels, so growers are advised to apply as soon as possible.

However, growers are reminded that all these potential changes to abstraction licenses require a formal application and are dependant on the grower’s current license restrictions. “We will assess each proposal on its own merits, so there may be some we cannot allow due to the environmental risks or to protect other abstractors, says Mr Harvett. “Good communication is essential.”

The Environment Agency is working closely with the NFU, UK Irrigation Association and levy boards through fortnightly conference calls to discuss the current situation.

They are also looking into how they contact abstractors. “Some areas still have a letter-based system, which isn’t flexible enough,” he says. Options, including phone systems, are being considered.

For potato growers whose reservoirs aren’t full, “a solution might be to consider substituting other varieties that can yield well with limited irrigation,” says Mark Stalham of Cambridge University Farms.

The processing variety Hermes yields better than others in periods of restricted rainfall, using water more efficiently in producing yield. “It is, therefore, more popular with growers on soil where irrigation is either limited or unavailable.”

Marquis and Cara are also drought-resident varieties, though their potential is limited. “There’s only a limited amount of Marquis that can be grown,” says John Sarrup of SPUD agronomy.

“If you are looking at drought resistance there is a link with determinacy. Indeterminate varieties tend to be more drought tolerant,” says Mr Sarrup.

Irrigation scheduling is more important for those growers with limited water. “Less than 50% of potato growers schedule irrigation, which is extremely worrying,” says Dr Stalham. “They have no way of knowing the efficiency of their water use.”

Irrigation scheduling identifies the timing and amount of irrigation necessary. It depends on the Soil Moisture Deficit (SMD), the balance between water loss (via evapo-transpiration and drainage) and water inputs (rain, irrigation), Dr Stalham says.

“Growers could possibly save an inch of water a year compared with not scheduling,” he adds.

“The actual application is also important,” says Mr Sarrup. He adds that applying 15mm of water from a boom has the same effect as applying one inch from a rain gun. “Applying water by a boom is much more accurate.”

Drip and trickle irrigation techniques can also save substantial amounts of water. But it might not be suited to all soil types and can be more costly than using a rain gun.

“The balance of organic matter is also a good way to retain moisture” she adds.

Keep up to date with the latest drought news .

Also see videos including one with David Matthews outlining the implications of the drought on his business. 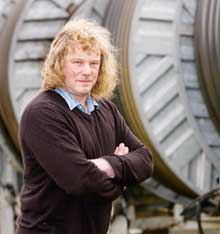 Mark Bowyer manages the Holkham farming company in Norfolk and he has only seen 40% of the average expected rainfall to date. Although he is not planting irrigation-intensive crops such as carrots this year, he is still hoping for a wet summer.

“We currently have enough water to irrigate 2-3in/acre for potato crops, but ideally we would like 5in minimum,” he adds. However, this riskier strategy might pay off. “If we have a wet summer we will have a good crop.” 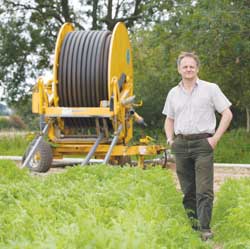 Andrew Blenkiron manages the 4,400ha Euston estate south of Thetford in East Anglia and he has already decided to cut back his potato area for this season.

The light land is irrigated from private reservoirs. “This year we will be reducing the volume of irrigated crops by 20% because of the lack of water. Our 100m gallon lagoon is just over half full,” he adds.

“In our area, the Environment Agency is talking of voluntary restrictions of up to 20%.”

He is looking into short-term water savings. “Dependant on the timing, we will be trying to water at night, though this can be tough in reality.

“Looking for other sources of water, we will be buying water off a neighbour.” However, he adds that this option is only available because of his neighbour’s rotation. “There is ultimately only a certain amount of water available.

“It’s too short notice to look into varietal changes and to some extent it’s the market that dictates the varieties anyway.”

In the long term, Euston Estates is trying to invest in more water storage capacity, with the hope they can carry water over from one season to the next. “It would give a greater element of flexibility.” Though he says it would require significant investment.

“We are having to be more careful on site selection,” he told Farmers Weekly. “We are being a bit more critical. If there is a field that is slightly more iffy, we are not using trickle – we are moving it about a bit.”

A much more efficient use of water than some forms of irrigation, trickle does not require a licence. But it does require heavy investment – often more than £1,000/ha.

Rather than drenching crops in water, trickle irrigation delivers water where it is needed, at the base of the plants near the roots.

Water is delivered through disposable tape laid 50mm below each ridge about two weeks after planting. The silty soils are prone to capping, so this approach means irrigation can continue under the cap to control soil moisture and prevent scab.

Even so, Mr Matthews says the lack of rain meant it was still important to be conscientious when using what is becoming an increasingly scarce resource. “Water still has to be there and we have to use it responsibly, so we have to try and assess where the water will be in two or three month’s time.

“It’s probably been the driest we’ve known it. It’s being compared to 1976 a lot – it will be interesting to see. The next three months will be critical, but we think we’ve got the right delivery system to probably use less than half the water than overhead irrigation.”