One such farmer is Essex grower Tom Bradshaw, who became frustrated when trying to put precision farming into practice on his 1,485ha farm, believing that technology had got ahead of the agronomy.

As a result, despite investing in various precision farming techniques and keeping abreast of developments, he had been unable to find the right system for using all his information to make key agronomic decisions.

Having previously dabbled with variable seed rates and come up against problems, Mr Bradshaw’s requirements were straightforward.

He wanted a simple automated system that would work from a tablet, if necessary, as well as use his existing data, so that decisions could be made and implemented either from the office or out in the field.

“I also wanted to be able to operate to wider extremes than just altering seed rates up or down by 10%,” he says.

“So any system I adopted had to allow me to push the boundaries and make changes to it, while having the capacity to expand and hold more of my farm data.”

He was also mindful of the cost implications and was looking for a service based on a hectarage fee, rather than having to pay for every time he created a plan. 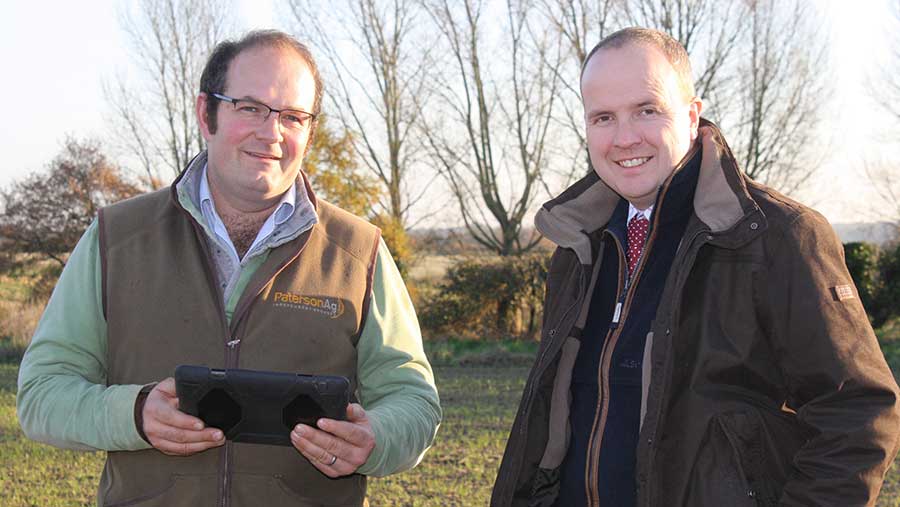 “I’m more comfortable with paying a fee per area. It means that I can expand my use of the system and bring in other layers of information, as I need to, without additional expense.”

Having seen the Hutchinson’s Omnia offering at last year’s Cereals event, he was keen to give it a go. He had the system up and running by July and has since introduced variable seed rates across 600ha of winter wheat and hybrid barley.

“I was able to upload my existing soil zones and soil sampling results, before making use of the in-built algorithms to vary our seed rates by as much as 80%, going from 120-210kg/ha.”

However, it is early days, he acknowledges. “I will be looking at establishment plant counts and correlating them to seed rates, but then it all comes down to yield. After three years, I will know whether it is making a difference.”

His next step is to include blackgrass and slug pressure information, as well as seed-bed quality, and he intends to drill all his spring cereals using the service.

The new web-based offering from Hutchinsons, which has targeted agronomy at its core, aims to make it easier for growers and agronomists to access and interpret their information to make management decisions.

As Oliver Wood, precision technology manager at Omnia explains, it was important to develop a system that could hold and interrogate multiple layers of information.

This multi layering starts with the soil and then adds layers of data from a variety of sources, such as N-sensor data, nutrient application zones, soil conductivity and weed maps.

It enables more informed decision-making on the full range of variable applications.

“One of the reasons that growers weren’t engaging with precision farming was that it was divorced from agronomy,” he says.

“As a result, decisions were being made in isolation, so they weren’t always as accurate or relevant as they might have been.”

With Omnia, the ability to overlay numerous maps and different zones means that the resulting recommendations take all the information into account, and are tailored to specific requirements or situations, Mr Wood says.

The idea behind it was to create a platform which could host, manage and inform, rather than just store data, putting the user in control.

As a result, the company decided on an open approach and developed it to connect to other cloud-based systems, so that all data sources could be utilised, including data from Gatekeeper.

“It has been designed for self-reliance, or it can be operated by an agronomist, and it can be used for whole fields or applied to field segments,” he says.

“Either way, it has a number of import and export features and it can be accessed on-line for use on any device.”

Behind the system are crop-specific Hutchinsons algorithms, with winter wheat, winter barley, spring wheat, spring barley, peas and beans all included, with more in development.

“Having a targeted approach to input use is the way forward, both in terms of costs and environmental sustainability,” Mr Wood adds.