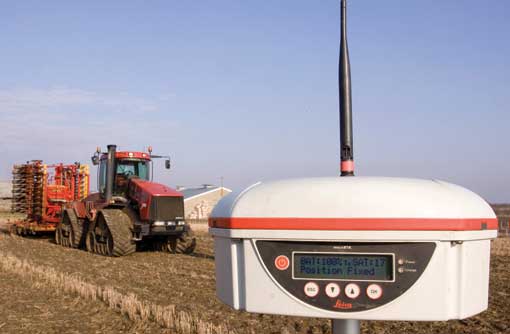 In a perfect world, arable crops would be as even and true as the hallowed turf at the Lords cricket ground at the start of the English summer.

However, this is rarely the case in the real world of arable cropping, with few pieces of land having the ability to perform to the same level of its neighbour, due to variable soil type and topography.

So what can be done about these inconsistencies?

Precision farming is not a new concept, but with escalating input costs, plateauing yields and an increasing focus on reducing environmental impact it is time for it to step up and be part of the solution that growers seek.

Dick Godwin, visiting Professor at Harper Adams University where the new National Centre for Precision Farming was opened as part of a £2.93m project, believes it can deliver.

“It has been used in farming for many years. Changes in texture, seen when we have been scanning soils for conductivity, often correlate to old field boundaries and would have been managed separately,” explains Prof Godwin, an expert in engineering, soils and precision technology.

There is a debate on whether to cut losses on less productive parts of farmed land and focus on areas with high yield potential.

But as technology and the information it provides improves, so does our knowledge of what is required to make soils, the environment and the crops that are grown work in our favour.

The biggest selling point of precision farming for farm businesses is how it can affect the bottom line and the benefits cannot be disputed.

Global positioning technology on the farm can range from a simple light bar for guidance of an implement, to fully repeatable real time kinematic (RTK) systems whih are accurate down to a centimeter, capable of implementing controlled traffic farming (CTF).

Reducing overlap is key for sprayers, spreaders and drills, saving inputs and at the same time reducing environmental impact and soil degradation.

So what are the options?

Structured precision agronomy packages, such those offered by, amongst others, advisers Agrii (SoilQuest) and Frontier (SOYL) are the options Prof Godwin believes the industry will take up.

However, there are also live systems such as the Yara N-Sensor that have their advantages too, providing live, in crop data to optimise nitrogen input.

Here we look at what each package offers and hear from growers that are seeing the real benefits at farm level and in their bank accounts.

James Faulkner wasn’t convinced of the benefits of variable rate phosphate and potash, particularly on the farms heavy soils.

However, after trying it out on the farms block of land north of Colchester it was soon rolled out across all 1,100ha of arable land varying from sand to heavy London clay around Peldon, north Essex.

With NIAB TAG also running phospate index research on their heavy ground around the homestead in its 57 year of continuous wheat they pushed yields from 8t/ha to 12t/ha in trials by improving the availability of phosphate.

This confirmed the value of getting these indices right and justified our decision to get the whole farm mapped and start evening things up, he adds. 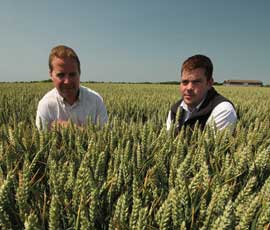 The farm partnership, R. Davidson and Son has always enjoyed being at the forefront of innovation and has been practicing some form of precision agronomy since 1996, with yield maps created off the combine.

In 2002 we bought a light-bar guidance system and by 2004 we were equipped with autosteer on the combine and tractor, says Mr Faulkner.

The farms P and K indices varied from 0-4 and as soon as the variable application began, fertiliser was being saved and yields have been improved year on year.

Its hard to quantify how much has been saved, but it has paid for the kit and the maps many times over since we kicked off.

Some fields dont need any further phosphate application, with sewage cake providing enough available P for the crops and gives a welcome boost to organic matter.

Significant benefits have resulted in operator yield increases, improved grain quality, less lodging and improved blackgrass control an important aspect in Peldon well-known for its resistant blackgrass. Although the evenness of crops hasnt been perfect, Agrii work on a consultancy basis ahead of each season to apply the local knowledge of drill woman and business partner Liz Davidson.

Where we dont think that the plant populations arent quite high enough, we can push it up a bit on the seed map, says Mr Faulkner.

Seed-rates have varied from 100kg/ha to 200kg/ha in the same field, although Mr Faulkner notes that they havent saved any seed, just put it where it needs to be.

They will be moving the system onto oilseed rape in the coming autumn, hoping to achieve a more consistent establishment experienced in recent seasons.

It is far more accurate than the farmer can ever be, so it will be a huge benefit to the crops and help to produce a consistent and reliable gross margin, Mr Faulkner adds.

One North Yorkshire farm and contracting business is using Yaras N-Sensor to put the icing on the cake in their crop nutrition programme.

Gloag and Sons Ltds Mark Ward is now running two Bateman RB35 sprayers, equipped with N-Sensors, that cover 1,500ha of combinable crops across the home farm and a further 6,000ha of contract spraying and fertiliser applications.

The farm, near Stokesley on the edge of the North Yorkshire Moors, has been using N-Sensors for seven years and more recently opted for the active light source (ALS) sensor which are able work 24 hours a day.

The system uses a cab-mounted sensor to measure the crop, translate the data into an application rate and send a signal to the spreader or sprayer rate controller, which will adjust the levels of application.

The rate is adjusted above or below a pre-set base rate that is entered before the operation begins, based on figures from RB209.

We have used Yara fertiliser for many years, so it made sense to stick with the Yara system and its really added value to our Precision Application Technology contracting business too, says Mr Ward.

Customers have received the system well and Precision Application Technology are the only contractor in the area that can offer a variable nitrogen service.

Mr Ward believes the user-friendly nature of the Yara system is a big advantage, as he can pull into a field ad-hoc, enter the required parameters and begin variable application immediately.

At the home farm, soil testing carried out by SOYL and the York-based Precision Decisions has produced soil and nutrient maps to even up their base P and K.

However, Mr Ward explains that its a work in progress and will take another two or three years to get indices where they need to be.

Our pH is now predominantly 7.2, so weve reduced the chances of nutrient lock-up and in a 1 in 3 oilseed rape rotation, club root pressure is eased, he adds.

The N-Sensor is allowing Mr Ward to fill in the gaps and has seen much more even crops since using the system, with lodging now non-existent and harvesting troubles eased.

Our customers that use poultry manure have also seen a big improvement, with the nature of manure application leaving some pockets of high available nitrogen.

It will pick up those lush patches in the crop during spring applications and apply less nitrogen, he says.

• MySOYL online portal for access to nutrient and application maps

Simon Newberry, who manages just over 400ha around Ashley Farm near Kings Sombourne, Stockbridge, saw a substantial financial benefit in the first year.

We changed our fertiliser spreader to a Kverneland GEOspread, capable of variable rate application, and started applying P and K variably five years ago, along with lime and magnesium.

Although benefits in the crop are hard to quantify, we have used much less fertiliser since and saved around 15,000 in the first year, says Mr Newberry.

The soil types vary from chalk to heavy clay caps on the higher ground, so evening up the variability in soil nutrients was the other driver for Mr Newberrys rapid uptake of precision agronomy.

The whole farm had been soil mapped by 2011, so each nutrient was being applied exactly where it was needed, with very little waste and we are also variably drilling to ensure we get the optimum plant populations, says Mr Newberry.

After the base nutrients of P and K were addressed, the focus on Mr Newberrys farm was switched to optimising his nitrogen, with the other two only requiring maintenance applications.

Using the soil maps and satellite imagery of crops leaf area index (LAI), SOYL are able to provide variable rate application files throughout the growing period, which are transferred to the spreader controller and applied.

Nitrogen savings are hard to quantify, but the visual difference has been tremendous (see maps). Crops are even and Ive had no lodging Ive even scrapped the second growth regulator since using the system, says Mr Newberry.

The system has also given him the confidence to put more nitrogen on crops to push yield as hard as possible. Applications often reach 300kg/ha and are now hitting spot yields of 13t/ha in his winter wheat grown for milling and seed premiums.

The ability to enter data and produce our own nitrogen recommendations through the SOYL website has also been a big plus, along with the support from SOYL, which has been excellent.

Its the beginnings of being able to link up all your data in one place, which will make data management and recording much easier, says Mr Newberry.

Our three case studies all agree they would like the next step to be variable rate pesticides to be the next step and with the technology here, it is just around the corner.

However, Tom Robinson, application expert with agchem company Syngenta, believes that currently the limiting factor is the lack of research by chemical manufacturers using the technology with their products. The ability to accurately vary rates across a field according to a map has suddenly become a reality.

Current pesticide regulation and development protocols are based on the same dose being applied across the whole field.

There needs to be changes in the way products are developed and registered to incorporate the capabilities and benefits of the precision application technology that is present on farm.

When it happens, it will be a game changing moment, says Mr Robinson.

Syngenta is carrying out research into changing rates of pre-emergence herbicide and seed according to weed burden and variably applying plant growth regulators dependent on crop canopy density.

Mr Robinson explains that when using herbicide mixtures there is the possibility to apply higher-than-traditional rates of pre-emergence mixes where there are known blackgrass problems by subtly changing water rates.

The Moddus applied early to thinner crops resulted in more tillers. We havent had bad lodging years recently, so no conclusions have been drawn in that respect, but work will continue to try and take this technology to where it will benefit the grower, he concludes.