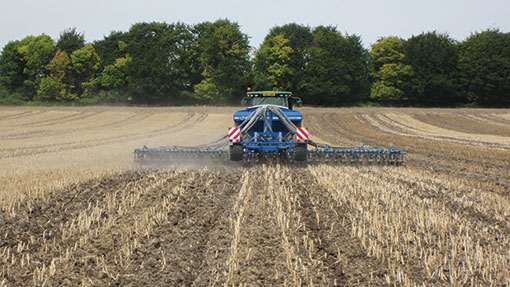 The 10/30m permanent tramline system he devised needs satellite guidance for only one of the several operations involved and employs a single implement for both cultivation and sowing.

A home-modified subsoiler for maintaining the tramlines and a mid-size combine with a 10.5m header are the other key elements of a system that suits many more farms than the 12/36m controlled traffic configuration, which demands the biggest combines and cutting tables.

Over the 20 years that Julian Gold has managed farming operations on the estate near Wantage, crop establishment has moved from ploughing and maximum cultivation to minimum tillage and direct drilling.

His latest approach, using minimum tillage and controlled traffic (confining all field operations to the same wheelings year after year) is driving down establishment costs and allows the soil to restructure naturally.

Both techniques minimise the effect of heavy machinery on his most valued asset – silty clay loam soils lying over chalk.

With the dual wheels used in the past now ruled out as impractical, he believes the best way to protect soils from heavy machinery is to establish crops using shallow cultivation with as few passes as possible, progress to lighter equipment and concentrate any compaction to wheelings

“If we don’t have the means to eliminate compaction, the best thing is to confine it to a small area of the field,” he argues. “I want to allow the soil to restructure itself naturally, not rely on deep cultivation, which is power and fuel hungry, and reoxidises the carbon sequestered into the root system.”

Mr Gold hit on the attractions of a 10/30m CTF system after hearing about the difficulties growers had trying to devise a 12/36m approach.

“You need a combine header wide enough to take in overhanging oilseed rape plants so running a 12m header in a 12/36m system doesn’t work,” he points out.

Even fitting one of the new 12.5m headers and extra-long augers leaves the 12/36m system compromised because the track width of a combine big enough to take a header of this size is significantly greater than on tractors and other vehicles.

“We use a ‘narrow body’ combine with a 10.5m header and push track settings for tractors, trailers and the self-propelled sprayer out to 2m,” Mr Gold explains. “You then have a more acceptable composite wheeling about 1m wide and a 10/30m CTF system using equipment that isn’t outrageously big but still delivers high work rates.”

Cultivations and sowing are handled by a 10m Köckerling Jockey air seeder, which is based on the company’s trailed Allrounder Profiline heavy-duty C-tine cultivator. First, it creates a stale seed-bed, which is rolled to get firm contact between the soil and residue, and then it sows the crop in what is effectively a second cultivation pass.

That is the only time RTK-precision guidance is needed on the tractor because the first pass eliminates any visible guidance from the wheelings laid by the combine at 10m centres between the permanent 30m tramlines.

The roller tractor follows trails left by central pre-emergence markers on the cultivator-drill, as does the 30m sprayer while it re-establishes the permanent tramlines.

“Any compaction caused by the combine’s tracks is taken out by eradicator tines on the cultivator-drill, certainly in a dry season,” explains Mr Gold. “The 30m tramlines are managed on a flexible basis; if not damaged or rutted, they are left untouched, but otherwise they are ‘conditioned’ as necessary.”

A modified McConnel Shakaerator performs this task. All but four of its low-draft tines have been removed and those that remain are arranged in pairs to crack the outer edges of the 1m-wide tramline wheelings to allow water to drain away.

Each tine is preceded by a straight disc that cuts t trash and followed by two pairs of serrated, angled and dished discs to pull in soil loosened by the tines. That fills any ruts and hollows, with a set of trapezium press rings finishing the job.

The centre of each tramline wheeling is left intact: “That way, a firm base is provided for the spreader tractor and self-propelled sprayer, which do most damage when running on row crop wheels, and for the grain trailers at harvest,” explains Mr Gold.

The key to confining the grain trailers to the tramlines is combine auger length and cutting routine.

“We have a narrow bodied Lexion 760 with a 4XL auger originally developed for the bigger combines running ultra wide headers,” notes Mr Gold. “By coincidence, this delivers grain exactly in the middle of trailers running 10m away from the combine’s centre line.

“By working a three-cut land system, the combine opens-up along each tramline and then takes the next two cuts with the auger in the perfect position for discharging into trailers that only ever travel along the 30m tramlines.”

The cutting sequence requires good communication and positioning on the part of the trailer drivers because the combine ideally needs an empty grain tank before opening up a new land.

Claas has confirmed that a three-cut land is an efficient approach,  says Mr Gold, and thanks to convenient field dimensions at Hendred in all but two locations, the Lexion 760 can go from one end to the other without unloading. In the two larger fields, the combine simply moves across and stops so a trailer can draw alongside – still on the tramline.

Chaff build-up is a concern because CTF requires all operations to be carried out in the same direction whereas previously cultivation and combining were done at different angles to spread this material.

But as a result of the new stubble-to-stubble approach, wheelings previously running across 80% of the field surface – even without taking into account the random movement of grain tractors and trailers – has been cut to just 20%.

“The transition to CTF has given us a big increase in work rate, stretched the stale seed-bed period so much that we could cultivate for a second flush of blackgrass if necessary, and considerably eased power demand,” says Mr Gold.