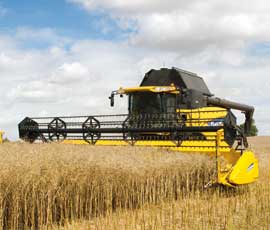 Oilseed rape growers face the smallest harvest in nearly a decade with rapeseed prices slipping and a difficult combining season in prospect.

Harvest estimates centre around a crop of 1.8m tonnes, the lowest since 2004, while prices are down £30/t in the last two months and there is a looming fear of crusher rejection due to green seed.

Some forecasts put the crop area down about 30% this season with lower yields due to variable crops and the big upswing in lower-yielding spring rapeseed.

Prospects of bigger oilseed crops around the world have put pressure on prices with Britain seen as the only big producer nation with lower harvest prospects.

“The market will need a significant crop problem around the world to change sentiment, but we see £320/t as still an excellent return for farmers,” says Jonathan Lane, trading manager at Gleadell.

He adds that growers could still earn an extra £20/t-25/t oil bonus to bring prices to around the £345/t levels which were quoted back in the spring.

The biggest corn/maize area in the United States since 1936 together with a potentially larger soya bean crop and good rapeseed crops in Canada and Germany have all put pressure on prices.

Owen Cligg, trading manager at United Oilseeds, estimates a national crop of 1.5m to 2.0m tonnes due to the fall in the crop’s area and poor yields, and sees a likely crop of around 1.8m tonnes.

“We are not looking at a very good crop, but prices have drifted down quicker than expected,” he says.

Mr Cligg’s colleague Richard Elsdon warns that there is huge variability in crops within fields which could cause problems with seed quality at harvest.

Oilseed rape crushers look for seed coloured yellow inside, but in such a variable season there is big likelihood that some seed will be green inside and may suffer price deductions.

“There will be a lot more management time and effort expended to avoid any rejections from green seeds this season,” says Mr Elsdon, United Oilseed’s technical manager.

He suggests that some growers may have to spray off rapeseed field in two stages due to the variable maturity of the crop.

The ideal time to apply the main desiccation spray, glyphosate, is when two-thirds of the seeds in pods on the main raceme are changing from green to brown, but this could still be some time off.

Mr Elsdon says the most forward crops he has seen will probably need glyphosate spray at the end of July, meaning the earliest harvest could be mid-August.