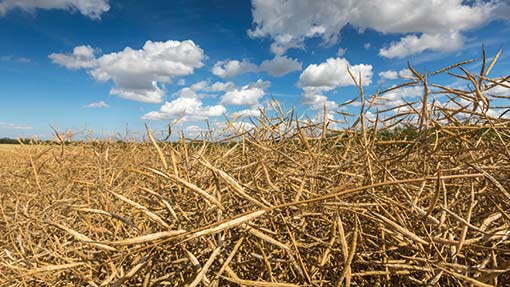 Results from the difficult harvest experienced in 2013 have underlined the importance of pod shatter resistant varieties, showing significant benefits when coping with punishing weather or a delayed harvest.

In a new technical review by Monsanto-owned breeder Dekalb, results have shown in extreme conditions pod shatter can cause over 50% yield losses in oilseed rape, while volunteers can exacerbate weed pressures in subsequent crops.

Trials carried out in the UK also showed average yield losses in varieties without the resistance trait can reach up to 1.47t/ha, when hit by a hailstorm.

Pod shatter resistance is a trait which has been developed in Dekalb hybrid varieties, and technical specialist Andrew Smooker says its importance is definitely growing, particularly after the 2013 season.

“Pod shatter was so important last year, and if we are heading for unsettled weather this year it may be the same again,” he explains.

“It will not eliminate the problem completely. However, it will provide valuable insurance against severe weather or harvesting delays,” Dr Smooker adds.

Minimising seed losses prior to and at harvest also has the benefit of reducing volunteer pressures in the rotation. Two years of UK field trial assessments suggest a typical 10-fold reduction in volunteers, according Dr Smooker.

“When you think a pod has 25 seeds. You are aiming to yield around 6,000-8,000sq m, so it only takes one or two to shatter and you are leaving a typical sowing rate on the ground,” he says.

As well as putting extra pressure on weed control in the succeeding crop, this provides a substantial green bridge for early slug activity.

In Lincolnshire, grower Henry Moreton, who farms about 240ha just east of the city of Lincoln in Bucknall, says pod shatter resistance is one of the first things he looks for in a variety.

“It gives you that extra confidence to cut later when it’s ready. You know your oil content is going up the fitter the rape is, but you have got that piece of mind it won’t all wind up on the floor if you leave it a bit longer,” he says.

The 20-page Dekalb review into the mechanisms and benefits of pod shatter resistance collates several years of evidence from the laboratory and in field trials across Europe, explains Dr Smooker.