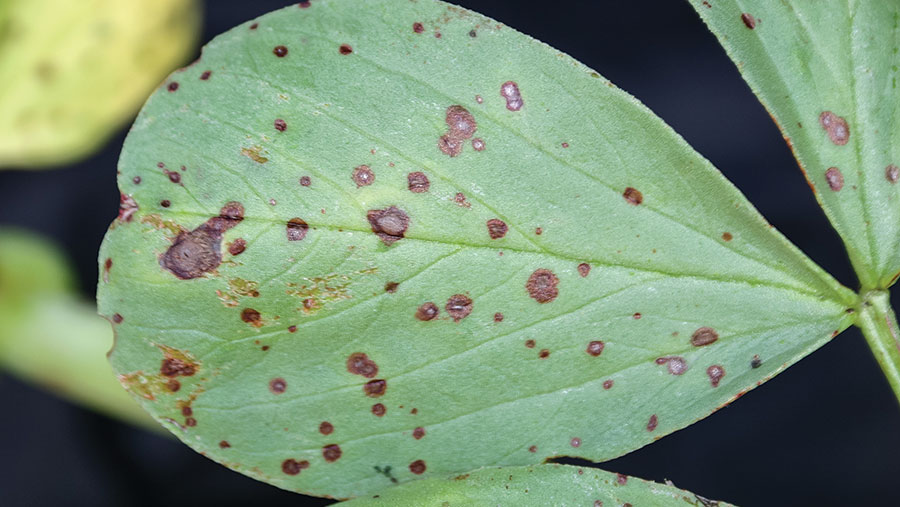 Bean growers are being advised to monitor crops and weather conditions closely, as diseases such as chocolate spot could rapidly infect crops when the weather does break.

Currently, the dry weather means there may be low levels of potential threat from chocolate spot disease inoculum on the lower leaves of bean plants, but that could change.

Once chocolate spot has taken its toll, it is extremely difficult to overcome, which is why an early protective spray is essential, if wet weather conditions pose a real risk.

“We don’t recommend growers to spray as a precaution. We only advise applications where necessary, which is why monitoring and keeping a close eye on weather conditions is key,” she says.

Dr Howard also highlights that where winter beans have been planted in the spring, the risk of disease may be reduced further.

Winter beans that were successfully planted in the autumn are now beginning to flower and will enter the pod-development stage in the next few weeks, where control for chocolate spot should be applied during early flowering, if required.

“It’s critical not to miss the first pod stage for chocolate spot control, which often occurs during mid-May,” she adds.

The prevention of disease spread to non-infected new leaves was previously controlled with the use of chlorothalonil-containing fungicides, such as Alto Elite, which is now set to be banned from 20 May this year.

Dr Howard also highlights that to reduce resistance build up, one active should be used at a full-rate with a mix partner at a lower rate and in high risk situations cutting back the rates of products poses a risky strategy.

Periods of prolonged hot, dry weather over the summer has in previous seasons increased the threat of rust developing later in the growing season, predominately after flowering.

“Due to the mild winter, there may be a small amount of overwintered rust on volunteers, but there has been no reports of the disease on crops,” she says.

However, Dr Howard advises growers that the situation can change quickly, with rust build-up able to develop earlier in the season if weather conditions become hot and dry.

“In late May and early June, the risk of rust increases as the disease becomes more prevalent. Growers must ensure the disease does not begin to build up during pod fill, as this will rapidly defoliate the plants, leading to yield losses,” she says.

Similarly to chocolate spot, rust can be controlled using products containing either azoxystrobin or tebuconazole, which should be applied from mid-flowering onwards, with tebuconazole providing particularly good control.