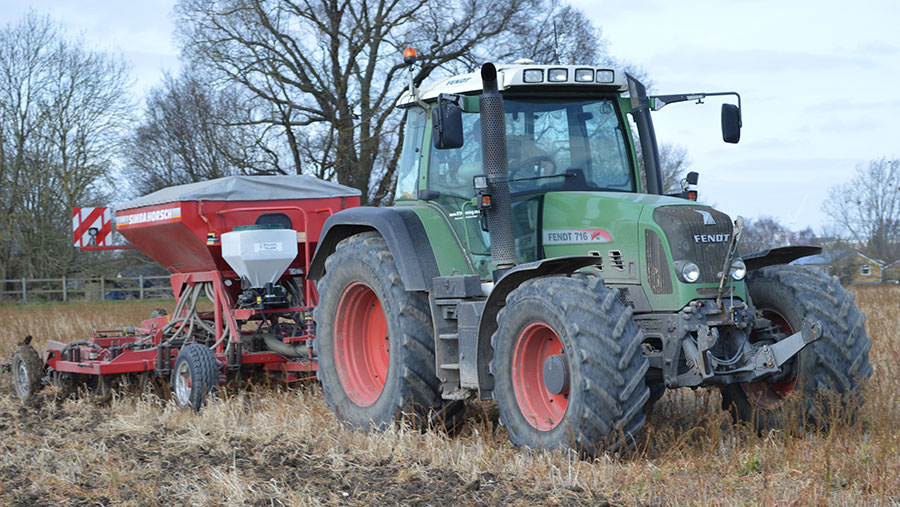 Cambridgeshire grower David White is busy direct drilling spring beans into a cover crop before his light soils dry out and the crop suffers from a lack of moisture.

Despite the wet spring, his chalky loam soils can dry out quickly, and his move in recent years to no-tillage was made to help crops become more tolerant to drought and to improve his soils.

“The idea is not to disturb the soil and so make crops more drought resistant while also improving the soil structure and increasing organic matter,” he told Farmer Weekly.

His crop, grown on the 160ha Hawk Mill Farm, Little Wilbraham, close to Cambridge, was previously sown in the summer with a cover crop of linseed, oats, phacelia and radish, and then sprayed off with glyphosate some two-to-three weeks before spring drilling. The spring bean seed was drilled about 75mm deep with his tined direct drill.

The 23ha field is being drilled with the variety Vertigo aimed at the human consumption market, and he said spring beans and oilseed rape are now his two main cereal break crops after previously dropping sugar beet from his rotation.

He has also drilled about two-thirds of his spring barley earlier this week, or about 25-30ha, on his lighter land.

“It’s been a late spring with some late cold frost. I am not too concerned about the late drilling as crops often catch up,” he added.