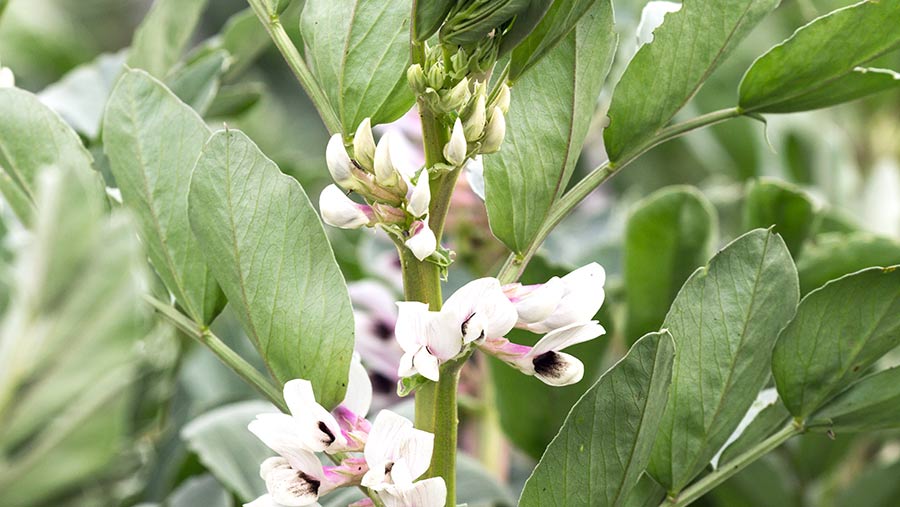 A perfect bean-growing year produced a record yield for one East Yorkshire grower and a good enough sample for human consumption to win a prestigious quality award.

Mr Smyth farms just over 700ha of largely fertile heavy clay soils just to the east of the Yorkshire Wolds, which is well suited to beans and has a 10-year winter bean yield average of 5t/ha.

Winter beans are favoured over a spring-sown crop at his Sunderlandwick Farms, just south-west of Driffield, as they can be harvested earlier than the spring crop during late August and early September.

“Our heavy land needs a good spring and we had a kind spring with dry weather in May and early June, while the rain came in the middle of June to help the beans,” he tells Farmers Weekly.

Tundra has given good yields and offers reasonable disease resistance, as well as a relatively early harvest, he adds.

The winter beans were established by broadcasting them using a 24m Amazon spreader, ploughed in to a depth of 100-150mm, and the surface power harrowed to a level finish.

Seed rates for a C1 seed crop grown on a contract were 164kg/ha, whereas a slightly higher rate of180kg/ha was used for the C2 crop.

Pre-emergence weed control of propyzamide and pendimethalin was applied on 27 October, and some weedier headlands were later sprayed with carbetamide on 10 February.

The crops showed signs of chocolate spot and downy mildew before the first fungicide application on 7 May at first flower emergence. There were also signs of pea and bean weevil damage.

Consequently, the crop was treated with cyproconazole and chlorothalonil (Alto Elite) and tebuconazole with an addition of lambda cyhalothrin to control the weevil.

With 40 or so beehives on the farm, the spraying took place early in the morning to avoid harming the bees.

A second spray of the same mix, but with the addition of pirimicarb to control the bean aphid, followed at mid- to late flowering on 24 May – again early in the morning.

The bean crop received 60kg/ha of phosphate and potash as a maintenance fertiliser dressing.

In most years the crop requires desiccation using diquat (Reglone). However, as the crop had blackened sufficiently, moisture levels were lower than 17% and there was good weed control, the crop needed no dessication.

The slightly reduced yield for the C2 crop was due to some lodging because of excessive growth on one smaller patch. The highest individual yield (adjusted to 15% moisture) achieved on one 21.65ha parcel was 6.92 t/ha. The yields set a farm record, exceeding the previous 2008 record yield of 6.12t/ha.