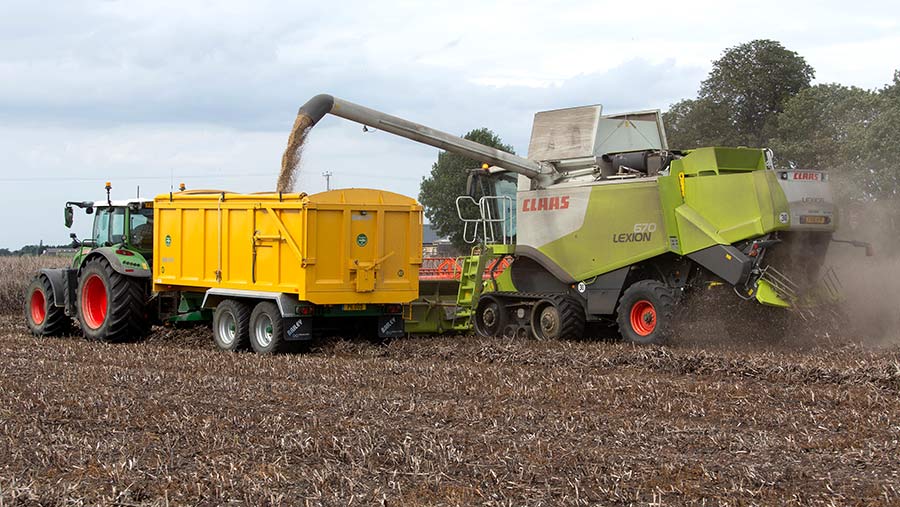 Despite increasing concern over uncontrollable bruchid beetle in some parts of the UK, rotational benefits and a reasonable feed market shouldn’t put growers off drilling spring beans for harvest 2021.

However, like oilseed rape, spring beans are suffering a significant pest challenge that is stimulating debate among growers and agronomists about the crop’s future.

Bruchid beetle was rarely seen in crops 30 years ago, but is now commonly found in southern and eastern areas of the UK, where damage tends to be the most acute. North of the Humber and Scotland typically see much lower levels.

What is bruchid beetle?

Over recent years, attacks have been severe in certain hotspots, and PGRO’s Becky Howard says there are two factors behind the pest becoming more challenging, the first being climate.

“For several years we’ve seen much warmer conditions around pod set in June and, as activity is strongly linked to temperature, high levels of bruchid damage in crops,” she explains.

The second issue is chemical control. From next season, the withdrawal of Biscaya (thiacloprid) means growers will have only pyrethroids, and this is a concern as there is resistance.

“In addition, most farmers just don’t like putting insecticides on to a flowering crop that is full of pollinators and beneficial insects, so we have made the decision to grow spring beans for feed now,” says Mr Cook.

For Frontier’s pulse trader and bruchid expert Andy Bury, the beetle is certainly a big problem for spring beans, as it can erode the prospect of any potential premium.

The premium for attaining human consumption grade for export to buyers in Egypt has been one of the biggest attractions for growing the crop, as prices can be £30-£40/t higher than feed beans.

However, he says it is not necessarily a deal breaker when trying to sell a crop into a premium market.

An arbitrary target for bruchid damage in human consumption beans is 3% or less, with 10% damage considered the very worst you might hope to sell at a premium.

However, customers in Egypt will buy beans with their eyes, and the most attractive visual attributes are large beans that are pale green in colour.

“Farmers and traders tend to place a bit too much importance on that [bruchid damage] number. If it is 5% or 10%, in reality what difference does that make? It will very much depend on the year,” Mr Bury said.

“This year, we exported crop 2019 beans that had in excess of 12% bruchid damage to the customer quite happily because they were a good-looking bean with the right colour.”

In terms of yield, spring beans can significantly outperform winter beans when established well and with enough moisture in a dry spring, typically on stronger land.

Where 5t/ha plus can be achieved, even without human consumption premiums the crop is competitive when feed prices are bullish.

This case strengthens as demand grows for home-grown protein sources instead of imported soya in animal and fish feeds, with prices this year in the region of £200/t. Forecasts for the 2021 crop peg feed prices at a favourable £175/t. 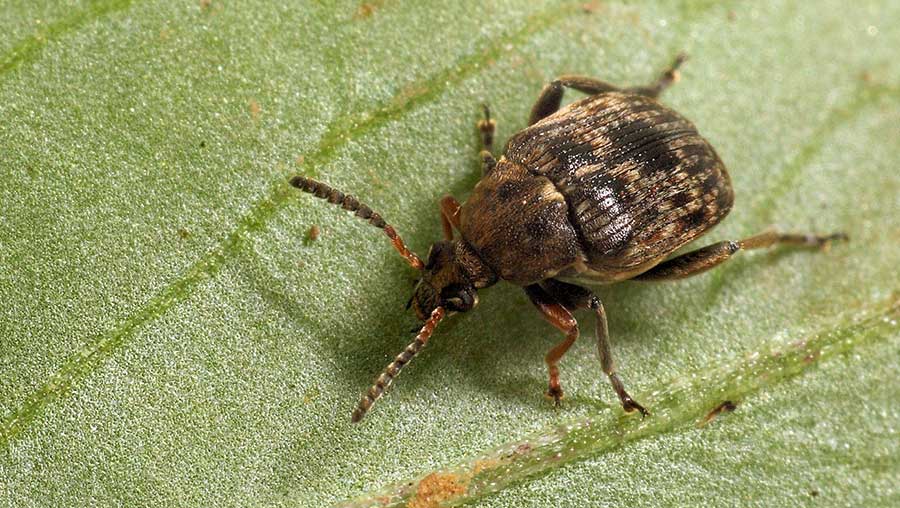 “So bruchid is certainly not a reason to dismiss spring beans as an option,” says Mr Bury.

“My advice if wanting to grow for human consumption is to focus on visual appearance and influence what you can.

“If you get staining due to wet weather before harvest, there is nothing you can do about that.

“But if you harvest headlands first – where bruchid damage tends to be worst – and store separately, cut a clean sample free of admix and store well to reduce discolouration, you give yourself a chance.”

When trying to influence bruchid damage, he advises growers and agronomists to be as pragmatic as possible in making spray decisions, which are imminent in many 2020 spring bean crops.

Where temperatures are above 20C and egg laying on pods is rife, it is probably a waste of time and money spraying because it will be difficult to keep bruchid damage at acceptable levels.

However, in areas or years when pressure is low and premiums are up at £30-£40/t, spraying may help protect quality and give an adequate return on investment for any insecticide sprays.

“I accept we need to be prudent when applying insecticides, but where it’s necessary, it can be done safely at night when the bees aren’t active, adds Mr Bury.

Ed Whitfield, who farms 810ha just west of Spalding, has been growing spring beans for 30 years and says bruchid beetle damage has been getting worse over the past decade, with spraying now less effective.

This does hinder the farm’s ability to hit human consumption quality, but its silty clay loams typically produce good yields over 5t/ha and have touched 7.5t/ha in exceptional seasons.

“Prospects are lower this year because of the drought, but in a normal season if we don’t get the quality, feed beans can still make us money when the price is reasonable,” he says.

“We try to maintain 50% of our area in first wheat, so it’s important to have a range of break crops in the mix,” he explains.

An area that may see an uptick in spring bean acreage is Scotland, where, like the rest of the UK, oilseed rape’s popularity is starting to go off the boil, according to Scottish Agronomy’s Eric Anderson.

Light leaf spot is increasingly difficult to control, establishment is trickier due to cabbage stem flea beetle moving north, and this season many crops have been hit hard by rape winter stem weevil larvae.

“There is no magic chemical wand to wave at these problems anymore, so what else can we grow?” he says. “Beans are part of the mix of crops people are looking at for next season.”

Mr Anderson says the human consumption market should be the target for Scottish growers and without an established bruchid beetle problem, the odds are more favourable, but not guaranteed.

Where human consumption quality isn’t achieved, there are feed markets on the doorstep for the coastal fish farming industry and there is good demand for Scottish-produced protein for animal rations.

A major stumbling block for beans in the north is maturity, with any harvest delay potentially jeopardising establishment of the following winter wheat crop.

“One way we can bring harvest date forward is to drill spring varieties in November if conditions allow, otherwise crops are drilled from early March onwards,” Mr Anderson says.

“With diquat recently withdrawn, desiccation will be more of a challenge, so it will be a case of picking a harvest date and using glyphosate to ensure the crop is fit for harvest.”

Does trap cropping have potential?

At present, delaying drill date is the only cultural method shown to reliably reduce bruchid damage, with PGRO research suggesting it is halved by drilling in early April instead of early March.

To try to bring other non-chemical options to the table, the group’s Becky Howard says research has begun to explore the potential for trap cropping to reduce the pest’s impact.

The idea is to use an earlier flowering species in close proximity to the beans, attracting adults to feed and lay their eggs there, with the hope that pods in the main crop will fill and reach maturity unscathed.