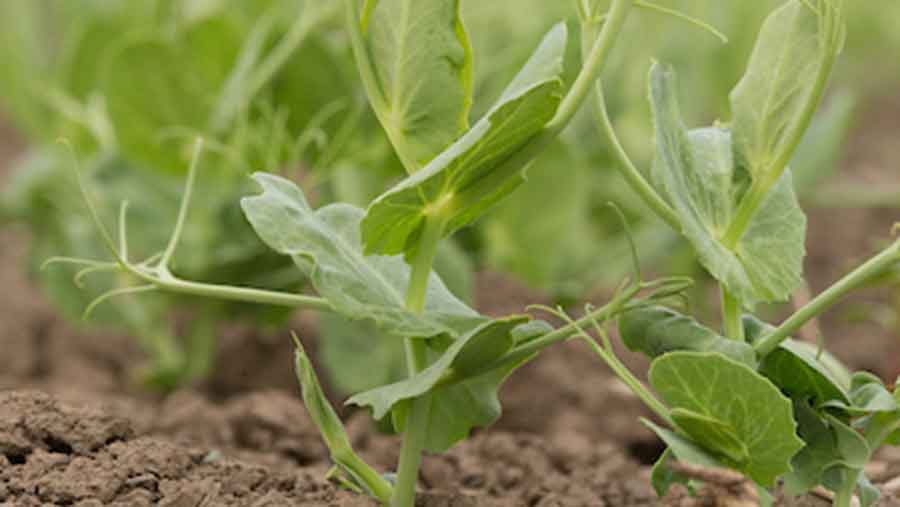 Pea yields saw another step up with the addition of a high yielding white to the 2017 variety lists, which was also joined by three other peas and a spring bean.

Karpate, a new white-seeded pea from Senova joins the Processors and Growers Research Organisation (PGRO) Recommended Lists as the top yielding pea at 105%.

It pushes Kareni, last year’s top yielding white into second place in this category at 101% of control.

The newcomer offers similar agronomics to Kareni with a 5 rating for earliness of ripening, a 6 for standing ability at harvest and a 6 for downy mildew resistance.

Stephen Belcher, PGRO’s principal technical officer, highlighted that the small blue category made a reappearance on the list with the addition of Greenwood (IAR Agrii).

“Its yield is 6% lower than Prophet and while the seed is smaller, it is on the large side for a small blue,” he explains.

Greenwood has a thousand seed weight of 253g, compared with 290g for Prophet.

However, one weakness highlighted by Mr Belcher is its standing ability score of only 4, similar to Crackerjack.

The only addition for beans is the spring variety Cartouche (Limagrain UK).

“It has a yield just 1% lower than the best [Lynx], but it only has a 4 rating for resistance against the key bean disease downy mildew.” However, the 4 rating is the same as the widely grown variety, Fuego.

Lynx, is the joint leader of the spring varieties with Vertigo.

“It [Lynx] has a 7 rating for downy mildew resistance, the best among the pale hilum types.”

New additions at a glance

Last season both winter and spring beans delivered above average yields in PGRO variety trials, while peas were more than 1t/ha down.

The overall trial average for pea plots was 3.79t/ha, which is well down on the five-year average of 4.81t/ha.

However, Stephen Belcher pointed to the trial near Harwich in Essex which bucked the trend and achieved the highest yield at 5.16t/ha.

Overall, yield was 17% higher than the five-year average of 4.89t/ha, with sites at Thorney and Hereford yielding close to 6.5t/ha, he says.

Spring beans were also above the average, yielding 0.23t/ha more than the five-year mean of 5.44t/ha mean.  The highest yielding site was in Kent (6.52t/ha), but several others yielded over 6t/ha.

Stephen Belcher was speaking at a PGRO press briefing earlier this week, held near Peterborough. For the full list, go to the PGRO website.