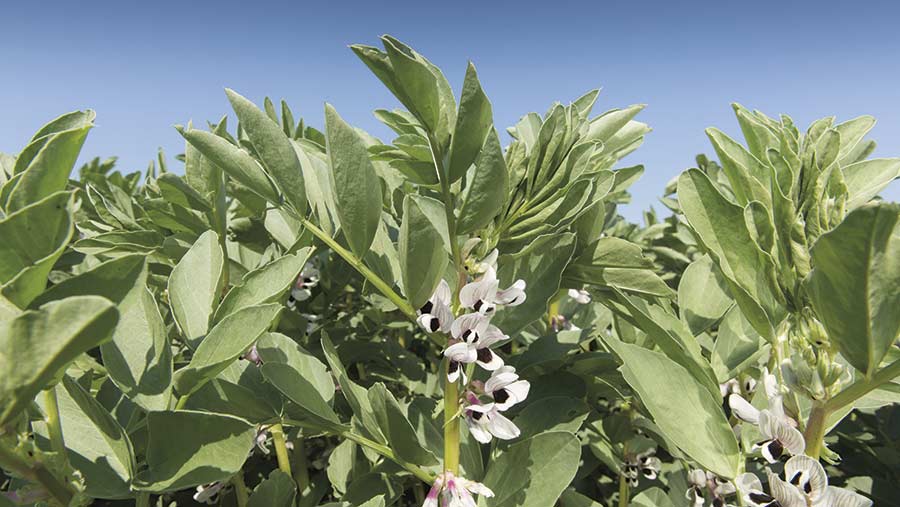 Spring beans could be more profitable than winter wheat if growers can hit the yields achieved by top bean farmers and the fertility benefits of the pulse crop are included.

Some bean growers hit yields above 9t/ha in the bumper harvest of 2015, while others are routinely producing 7t/ha, which makes the crop competitive against cereals.

Independent figures from the John Nix Farm Management Pocketbook show feed wheat gross margins are £200/ha-plus above spring beans, but that is using an average bean yield of 3.9t/ha and does not include the benefits to succeeding crops.

This data shows wheat variable costs at nearly twice that of the £249/ha for beans, and Roger Vickers, chief executive of the Processors and Growers Research Organisation (PGRO) says this is a good average even for high-yielding farmers.

“Top yielding growers would not be spending significantly more than this. When growers treat beans as a major crop then beans will yield,” he tells Farmers Weekly.

He argues that assuming a 0.8t/ha boost to winter wheat yields after a pulse crop and taking into account the free residual nitrogen of about 50kg/ha from the legume crop, then suddenly bean gross margins are boosted by £130/ha.

Taking away these benefits from the following winter wheat crop, then the comparative gross margin of beans looks far more interesting.

Mr Vickers says many bean growers are disappointed with less than 5-6t/ha yields and there are growers who believe they can break through the 10t/ha yield barrier.

In the low-yielding season of 2016, North Yorkshire grower Richard Wainwright won the PGRO bean yield challenge for the highest verified yield when he harvested a crop of Fanfare spring beans at 6.81t/ha.

This spring, traders expect the spring and winter bean crop area to be down 5% on the 2016 harvested crop of 178,000ha, but with new crop feed bean trading at £150/t, plus a possible £20/t premium for human consumption, beans could be more popular.

So for those looking to grow spring beans for the first time this season, we asked the PGRO experts for some tips:

Newer higher yielding varieties of spring bean are becoming more popular, with Vertigo the leading variety followed by Fanfare and then the older Fuego. Provisionally recommended Lynx has improved tolerance to downy mildew.

As 50% of bean seed is farm saved, Becky Howard advises getting all seed tested for ascochyta disease and stem nematode as well as its germination ability.

Beans should be grown in a minimum 1-in-5 year rotation and can be drilled from late February onwards, and can give soil texture and health improvements, says Lea Herold.

Recommended plant populations have been pushed up to 50-55 plants/sq m, although in areas which see vigorous growth, such as Scotland and south-west England, this can be reduced to 35-45 plant/sq m.

Stephen Belcher says these populations give the optimum yields in the field. The PGRO has produced a seed rate calculator as part of its Optibean tool and it is available from the PGRO website.

There is scope to increase drill row widths to 24cm and establish up to 60 plants/sq m with no adverse effect on yields after one year of study, but the current recommendation is to drill narrower rows of down to 15cm.

Pre-emergence weed control is essential with residual herbicides as there is only one approved product for post-emergence treatment. Herbicide use is a major part of the spraying element of crop’s variable costs.

Jim Scrimshaw say bentazone is the only post-emergence treatment available, but it has a  limited weed spectrum and will not control annual meadow grass, large fat-hen or black bindweed.

Pea and bean weevils, bruchid beetles and black bean aphids are among the three key insect pests. The first causes notches around the leaf edges and is seen first on headlands as the pests walk into the crop from field margins. Control is by pyrethroid insecticides.

Bruchid beetles can be a problem at flowering in June and control (again with pyrethroids) is important if the crop is destined for human consumption. Control is less critical if aiming at the feed market or growing in Yorkshire or further north.

Spring-sown crops can suffer damaging attacks from black bean aphids just prior to flowering. These aphids can be controlled with products like pirimicarb when 5% of plants are infected.

Three important diseases need watching. Downy mildew can develop as greyish-brown, felty growth on the under-surface of leaves in cool weather at early flowering and may need treating with a fungicide.

Chocolate spot develops in wet conditions as reddish-brown spots, and early fungicide treatment is essential if the symptoms are seen at the first bud or early flowering

Bean rust develops in hot weather as reddish-brown pustules and most damage can occur if infection begins at early flowering and pod set.