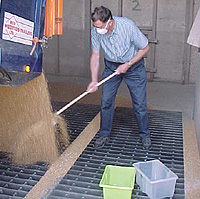 Central stores have been intaking all types of crops this week, with some farmers cutting wheat and spring barley before oilseed rape.

On average, farmers were about halfway through oilseed rape harvest, said Simon Ward at Openfield.

“We are not being hit with as much rape as we normally would at this time of year.”

Early wheat samples were reasonable, although some were suffering from low bushelweights, he said. Milling wheat protein contents and Hagbergs were all fine.

Winter barley bushelweights, screenings and germination levels were good, and most malting barley was reaching the required nitrogen level.

“Winter barley yields were about as expected – probably just average – and the first few wheats are down a bit, but they are the crops that would have gone off too quickly,” said Mr Ward.

“Oilseed rape has been good, with reasonable yields and clean samples. Oil content is about average, but people have got higher yields than they thought they were going to get.”